The Religious Durham Student: Who are the ‘festive’ church goers? 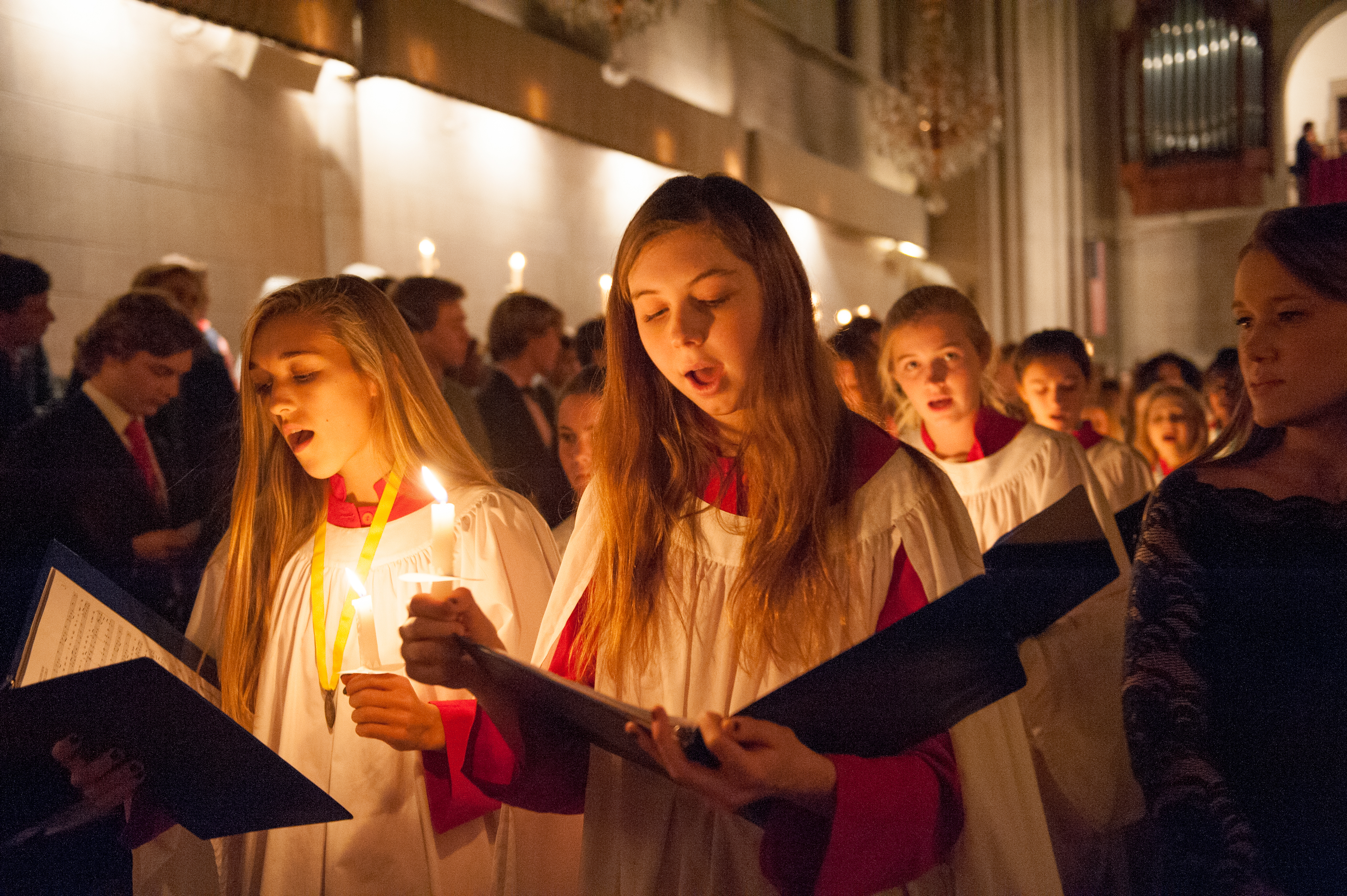 It’s about that time again. The sun is shining, the crocuses are out, it’s just about possible to venture out on the Bailey without a coat. The Easter holidays are just around the corner. But just how many of us will pay attention to the ‘Easter’ bit of Easter? To put it bluntly, is it all about the resurrection or all about the chocolate? This is not, of course, to say that the two are mutually exclusive – Christians will inevitably indulge in a few or a few too many Cadbury’s Creme Eggs (even if they have changed the recipe) over the Easter break as wholeheartedly as the next person! The question is really, what is it that this festival might mean to each of us, and how might we celebrate it?

With this in mind, we thought it would be an excellent time to reflect upon the results of the we conducted back in January after the Christmas break which investigated the varying degrees of student involvement in the religious side of Christmas. We surveyed 100 Durham students, asking them about their religious activities over Christmas alongside their general religious attitudes and uncovered some interesting results. (A full outline will feature in a further article)

As we perhaps might have expected from Durham, the highest proportion of respondents, 44%, identified as ‘Christian’, followed by 34% as ‘Atheist’ and 14% ‘Agnostic’. It is interesting that there seem to be significantly more atheists than agnostics represented here. This appears to indicate that Durhamites, or at least, the type of Durhamites likely to want to read this section of the Bubble, are pretty confident and sure of their beliefs. It should be noted, however, that the remaining 8% included responses such as ‘non-religious’, ‘humanist’ and ‘apathetic’, which might suggest there are more agnostic type identifications out there than might be apparent on first glance.

52% of respondents had attended a Christmas carol service while still in Durham, indicating that this number undoubtedly included those who do not directly identify as ‘Christian’. Of those who did attend, the most popular reason was ‘because I always like to go to carol services’ at 62.96%. It’s just something they do and enjoy. Perhaps for the majority of people attending Christmas services, it does not have to be more than this. Narrowly behind this came ‘I went for religious reasons’ and ‘I went because I like singing carols’ both at 59.26%. So, it seems that many people – over half at least – are going for the reason we might most expect. They are attending a religious service for ‘religious reasons’. Seems obvious enough.

However, much further investigation would need to be undertaken to unpack and decipher what the phrase ‘religious reasons’ might mean to each of these individuals. It could be, for example that people, particularly people who largely identify as ‘Christian’ feel a necessity to tick this box. It may be that their motivation was in actual fact more nebulous, more like ‘I went because I thought it would be a nice thing to do’, a phrase 38.89% of respondents opted for. Whether this feeling is at all connected to spiritual or religious feelings or more to do with a pride in a nostalgic cultural tradition is of course ambiguous. And in all likelihood, it is probably ambiguous for the respondents too.

Following up on this, 35.19% of them went either because they were feeling ‘Christmassy’ or wanted to. Whatever ‘Christmassy’ actually means in terms of religious or cultural orientation, this says a huge swathe of people go either because they feel in a certain mood or because want to put themselves in a certain mood or both. In any case, very few people (only 5.56%) had never experienced a carol service before. This would suggest that, for the people that do attend, this attendance at a carol service makes up part of what for them feels like a traditional Christmas.

If a traditional Christmas is itself contingent in some way on attending a carol service, we might expect for more people to attend carol services at home in the Christmas holidays than in Durham in term time. Apart from anything else, it is a practical fact that Christmas Day falls in the holidays. It also seems more likely that if students have fallen away from religious participation at University, they will have to fit back in with their families when they return home. In any case, this is what recent research led by Durham’s very own Matthew Guest has suggested. His 2013 book, Christianity and the University Experience found that many students attended church frequently at home but not at university, although this did not determine a diminishing of Christian identity.

Our survey however, in considering Christmas carols services, found the reverse. 47% of respondents, as opposed to the 52% who had attended in Durham, attended a Christmas carol service when at home over the Christmas period. Although it is not a massive difference, this statistic may suggest that students are able to be more actively engaged in Christianity at university than they might be at home. Although this remains unique to Christmas time, the responses about ordinary religious services mirroring Guest’s, it certainly proves that students are involved in Christian activities whilst at university, and are building on their Christian identities, however diverse they may be.

Like Guest’s research, this dispels the suspicion that university might be detrimental to fostering faith. Christian belief and expression of belief amongst university students is alive and kicking, his study shows, indicating that university can be a safe haven for Christian faith development. Christian students, it finds, comprise a large dynamic group in which diverse doctrinal views are held together. This may be the key to understanding why more students attended a carol service in Durham than at home.

It is interesting that, in contrast to the 59.26% in Durham, 72.34% of respondents gave ‘religious reasons’ as their reason for attending at home, making this the most popular response for attendance of services at home. This suggests that students may feel more of a sense of Christian identity at home, where they are able to reconnect with their roots. Hence, 63.83% said they attended because they always go at Christmas, and 61.70% because they liked going back to their home church. The next popular responses were ‘because I like singing carols’ at 48.94% and ‘because my parents were going’ at 46.81%. ‘Because I enjoy going to carol services’ came in at 38.30% and ‘because I thought it would be a nice thing to do’ at 27.66%.

The results, however, seem to give the impression that in Durham, away from family ties, students are freer to explore these things independently and make the most of the diverse range of opportunities on offer. There are of course diverse opportunities only because of the fact that the students which make up Durham come from such diverse backgrounds (well, ‘diverse’ largely within the Christian tradition of course!) and bring these diverse backgrounds with them to university. University is therefore, I think, a unique place in which these backgrounds become almost intensified away from the home experience as people attempt to share their backgrounds and experiences with others.

Friends seem to have had some bearing on attendance at carol services, 27.78% saying they went because their friends were going, as opposed to an unsurprisingly smaller, 10.64% of those who attended at home. Interestingly however, although 11.11% reported going to ‘encourage their friends to think more about Christianity’, only one person went directly to find out more about Christianity.

Our survey revealed that, although attendances at Durham carol services exceeded attendances at services at home, this difference was made largely by atheists rather than Christians or agnostics. An impressive 10% of those identifying as atheists reported having attended a carol service in Durham, as opposed to 4% who attended at home. Perhaps these atheists come from home backgrounds apathetic or hostile to religion and therefore feel more able to attend at University than at home. As indicated above, it seems that they did not go directly to find out about Christianity, or least would not want to think of it like this. Perhaps they just fancied singing a few nice traditional carols as a break from the summatives. Perhaps they went because it reminded them of something nice from their childhood. But whatever the reason, one thing’s for sure. Carol service congregations certainly do make for a mixed bunch! Next time, I will explore the remainder of the survey results to uncover just how diverse these beliefs really are.

The Christmas carol service is, ultimately, I propose, a wonderfully unifying thing. It holds together people with very different conceptions of a common faith, people who have no faith at all, people who just love the tradition of it all, and people who have no idea where they fit or why they are really there at all. But the truth is that all these people fit in at the Christmas carol service. They are all integral to it, all welcome and most importantly, can all sing ‘O Come All Ye Faithful’ together. In this respect at least, we are all faithful, faithful to each other, faithful to the carol service as a tradition and faithful in our sharing of it.