The Backhanded Compliment of Easter

Nicolete Burbach in Philosophy & Religion on 1 May, 2014. 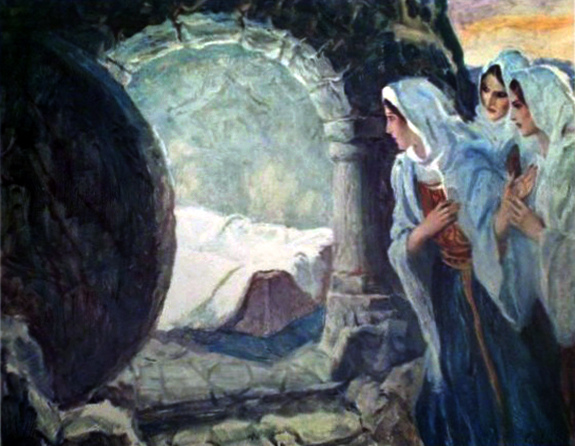 “And the face cloth, which had been on Jesus’ head, not lying with the linen cloths but folded up in a place by itself”

As a fan of the kind of ritual and razzmatazz that comes with High Church celebrations, I couldn’t resist going along to the lovely Easter service at the Cathedral this morning. The music was excellent as always, and the sermon was thought provoking. However, the thing that particularly stood out for me was a small feature of one of the gospel readings. Although it (aptly, as we shall see) seems inconsequential at first, I think that it communicates something of a profound message.

The reading itself was the account of the empty tomb in John (ESV). The bit which caught my attention was John 20:7, from the part where the scene inside the tomb is described:

“and the face cloth, which had been on Jesus’ head, not lying with the linen cloths but folded up in a place by itself.”

John’s Gospel is famous for being the ‘spiritual’ gospel, concerned with revealing the divinity of Christ and the occult lore around it. To this end, Christ’s humanity comes across less strongly than in the synoptic Gospels. It is a gospel fond of making mysterious pronouncements and reiterating wonders. And yet, here, in this single sentence at the very climax of the mystery, is a gesture so poignant in its humanity that it overshadowed the entire rest of the service: as the risen Christ, creator of the universe and conqueror of death, left his tomb, he stopped to fold his face cloth.

Ida Magli, in her book Women and Self-Sacrifice in the Christian Church notes that, throughout the Gospels, Christ directly addresses women: he speaks to them, and captures the domestic images which defined their experiences in the parables. In a culture where women were silenced, he traumatically confronted public discourse with the reality of their voices. He made them noticeable – that is, important.

We can see here an important link. The things that matter to society – the people, and the issues that society cares about – are the things that are given voice in the public sphere. The oppressed and downtrodden are silenced, pushed into the background and the shadows where they are not to be noticed. Jesus’s small act of fastidiousness in John 20:7 can thus be seen as an extension of his militant uncovering of the downtrodden. However, there is more to it than this message, repeated so often by Christians that it is now little more than a platitude.

The real significance of John 20:7 lies in its contrast with the scene around it. The fantastical backdrop makes the sheer mundanity of the act particularly striking. Here we have an event of cosmic importance, juxtaposed with the trivial act of tidying up. A modern equivalent would be to imagine Lenin leaving the house on the morning of the October Revolution, but only after quickly hanging up the washing.

This incongruous affirmation of humdrum domesticity reveals the profound claim at the heart of Christianity, which makes it so wonderful and beautiful, and also so challenging: that is, that Christ’s sacrifice was really a fuss about nothing. It is a common thing for Christians to say that everything is important to God. A lot of the time, this is a way of saying that there are no truly inconsequential things – that you are loved and special. But perhaps the truth is the inverse. As articulated so well by Syndrome in Disney’s The Incredibles, “when everyone’s super, no-one will be”. Christ’s gesture, then, is as much a slap in the face as a loving embrace: God’s humanity is important to God, but so is everything else – even tidy linen.

This allows us to read Christianity differently. It reveals to us the comic absurdity at its heart, so obviously present, but so very rarely noticed. That the creator of everything lived for a time on a backwater planet in some corner of the universe which, to all rights, should be describable as “God-forsaken”. That he then died for its inhabitants, with their boring and endlessly self-indulgent concerns like whose turn it is to put the rubbish out, and what colour to paint the kitchen walls. That such a price was paid for a species that irons its bedsheets.

Heidegger got it right when he described our typical activities as “idle chat”: we are unaware of both our freedoms and our finitudes, and like to fritter away our lives on inconsequential nothings, barely conscious of time passing. The next time you go out with friends, and they begin to complain about their latest irritation at their partner, or the dull, myopic career which the vast majority of us will fall into, just ask yourself – would God really have died for this?

At this point, Christ gallops in on a donkey, loudly proclaiming “Yes! There is a God who died to affirm your boring life!” The God of Christianity is a God you can pray to for a parking space. A God for whom everything is important. The message of Easter is a back-handed complement.

What is profound about the Easter story is that it is a tale to inspire hope and joy: it is a fundamental affirmation of the ‘worthless’, the ‘unimportant’. But it is also a story to inspire the kind of humility that only comes with self-deprecation: God redeems humanity because He loves us, but not because He thinks we’re special.

This leads us back to Magli. For her, Christ presents us with the reality of the downtrodden and the silenced, inviting us to engage with them. However, we can see that the Easter story forces us to go further: it is an active critique of society, confronting us with our identity with the ‘nobodies’ of the world. Here we have the true significance of the Easter story: no-one is ‘special’ – what we offer to one person, we must be prepared to offer to all. Thus it demands both a just and egalitarian society, and a truly catholic Church.