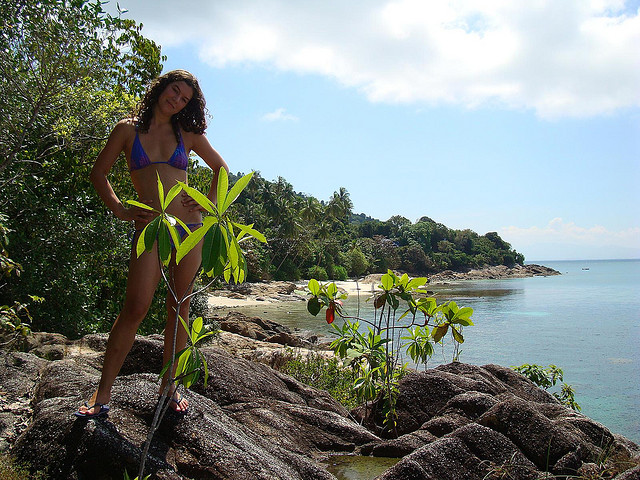 Looks like a million miles away; wonder how it feels?

Let me give it to you plain and simple: I enjoy reality TV shows. I’m not ashamed of admitting to this most cardinal of sins (so far as Guardian readers are concerned anyway). Many accuse so-called ‘reality’ television of supplying us with nothing more than a distorted carnival of societal maniacs who serve only the producers lining their pockets with incredulous advertising revenues. Even those programmes that employ seemingly ‘normal’ contestants are suspect to extensively manipulative editing, with a week’s worth of relational drama crammed into a frenzied forty five minute showcase…

Be this as it may, reality television creates one hell of a microcosm; it’s never a heaven; it’s a complicated purgatory at best. It’s all too easy to blame the eccentric medley of sociopaths on the screen, but it’s the microcosm itself that unleashes them. We all dutifully play our parts in this world – friendship groups, for example, do not have an exhaustive number of roles up for grabs. And so whilst we do help shape our world around us, the societal matrix certainly shapes us too.

And perhaps the psyches of reality TV contestants seems utterly nonsensical to those of us with a firmer grip on what ‘logical’ really means; but the manner in which these individuals relate to one another within a shared reality of their own construction – divorced from the usual milieu of binding social norms – I find it absolutely fascinating.

Shipwrecked aired originally back in 2001 as a social experiment. A load of strangers shared an idyllic island in paradise; the result was a fairly amiable community. There were allies and enemies, but they remained cordial. Had I been a drinker aged 11, it would have made perfect hangover television. A decade later and only with the mute button on for huge chunks at a time is it hangover-friendly. The difference? From the fourth series onwards it’s no longer billed as an experiment – it’s now a competition.

It’s incredible that this relatively straightforward change in nature can do. Shipwrecked became a ‘battle of the islands’ and we witnessed two islands battling it out – us vs. them, with clearly defined boundaries. This allowed for fragmentation on each island, but the ‘enemy’ was spelled out. We westerners have never been able to follow Nietzsche’s advice and move beyond the notions of good and evil, nor humanity beyond ‘goodies and baddies’. The two different islands bore two very different styles of life, with markedly different ideologies, and they wanted the other to lose. Each had its own notion of how a microcosm should behave. The new islanders who arrived every week were allowed to choose their preferred society; they could at least pick the reality that felt most right to them. These two-island series, with an inbuilt outlet whereby the social imperative to divide could be followed, were a pleasure to watch. If tribal warfare was conducted like this, then the world might be a happier place – leaders of the world, please take note.

But then this legitimised outlet for the darker consequence of socialisation was taken away – Shipwrecked 2011 returned to the previous one-island formula yet remained a competition! This time is wasn’t group vs. group, but every man for himself. Each week the group of 12 contestants would vote for their ‘Island Leader’, with the winner receiving a red bead; the one with the most beads after 12 weeks would be the winner. This relatively simple twist produced extraordinary results.

Acquiring these red beads developed, for some, into an obsession, absolute devotion. Suddenly a mode of currency was introduced, a social capital that carries with in an implicit hierarchy, with everyone on some level desirous to get to the top. Within the microcosm emerged a direct parallel of both money and righteousness. We live within a meritocracy, a rule-of-the-best, where one’s status is often calculated by how much wealth one’s accumulated. The class system depends on currency to differentiate – the imperative to divide runs in accordance with differing levels of merit, made manifest by money. Within religious microcosms, status is afforded by righteousness – the ‘best’ are in fact the ‘moral’. And within Shipwrecked, these red beads became the measure of worth, and their pursuit orchestrated the inner-epoch of the microcosm.

Within a system that holds money as the highest good, the pursuit of money becomes synonymous with the pursuit of happiness, sometimes replacing it as an individual’s priority. This is certainly the case with religious capital. And indeed within Shipwrecked, the idyllic paradise was ripped apart by the subsequent politics and game-plans. The island bought the meta-narrative and subsequently embodied it – the ‘point’ was always in the back of their minds. Happiness and pleasure, which really shouldn’t be so hard to find when you’ve a 3 month holiday for free with nothing to ‘do’ as such, were reconstituted to fit the microcosm’s terms. They could have had the time of their lives – but the fragmentation of the group, the divide between the couples living in ‘The Hills’ and the singles living in ‘The Slums’ (as derogatively named by the Hills, no less), the sacrificing of friendships to further the pursuit of the plastic, red beads resulted in three months crammed full with unamiable incident.

The microcosm seems mad and pretty stupid. The competition did not have to tear them apart. Sure, communities divide – sociologically speaking, Shipwrecked is a fascinating case-study in group behaviour. But the meta-narrative which imposed a currency which made merit manifest, that offered people a chance to pseudo-divinise their own status by means of a few bits of plastic…

We can’t forget that our greater macrocosm has a meta-narrative of its own, with its own merit-making formulas that people devote their entire lives and deaths towards by taking them as the sole arbiter of truth. I shan’t draw any further loaded conclusions; I’m not here to preach. But maybe if we take a step back and treat our own microcosm as a reality TV show itself, we might be surprised by what we uncover. The sane are only as sane as the criteria to hand.