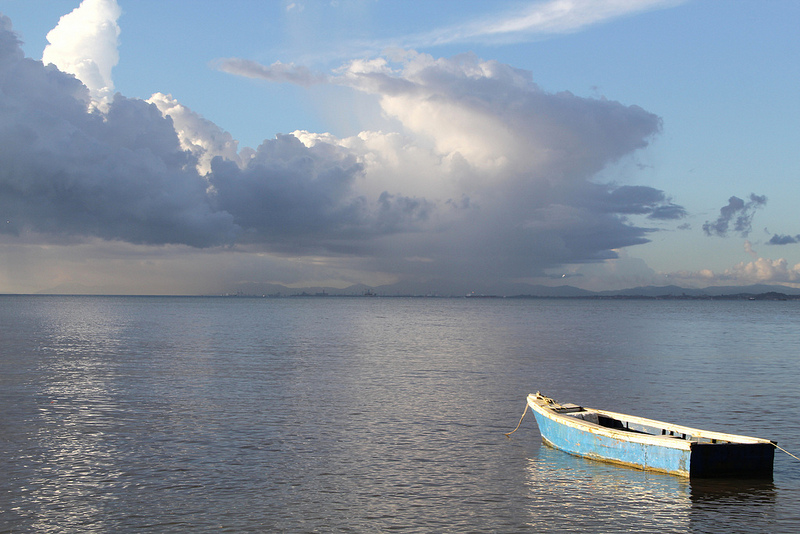 Lost at sea? Up the creek without a paddle? The water metaphors are endless.

Throughout the following article I have focused on Christianity. I should think that to a certain extent you could put the name of a different religion in, and may be able to rerun the argument. But as far as I am aware, Christianity is the only religion which starts from the premise that everyone is completely stuffed, and then offers them a way out; with other religions you can get there under your own steam. For this reason, substituting a different religion may not have the same force. The real reasons I have only mentioned Christianity are, firstly, because I know it far better than any other religion, and secondly because I am a Christian, and hold this faith for both empirical and deductive reasons.

The first difference is centred on what philosophers term, epistemology. Put more simply, the way in which a religion seeks to gain knowledge about the world is different from the way in which a secular ideology does. In essence, and I am aware this discussion is a simplification, there are two ways in which we gain information about the world; induction and deduction. Knowledge gained by deduction is sometimes called a priori. This is knowledge that is gained through logical reasoning. If A implies B, and B implies C, then A implies C. Induction, on the other hand, is gained through our experience of the world. If I have seen ninety nine white swans, then I will induce that all swans are white. Clearly the better our knowledge of the world, the better the inductions we can draw from it. This kind of reasoning is called a posteriori.

However, Christianity says that there are some things which are neither pre-programmed into our minds, nor discoverable by our senses. Knowledge of such can only come via Revelation. As an example, the medieval philosopher St. Thomas Aquinas argued that whilst the existence of God could be concluded through reason, the doctrine of the Trinity could not, and that we could only know it through God having told us Himself.

In practice, this means that where a doctrine like Marxism or Humanism claims to be entirely based on deduction and induction, a religious ideology contains statements about the world which are not derived from reasoning or experience, but are simply taken as given. This is not to say that it is impossible to give rational arguments for or against Christianity. Aside from the aspects gleaned via Revelation, the remainder can stand or fall on the logical and empirical evidence it provides. And, of course, the veracity of the Revelation stands or falls on the strength of these other parts.

I would, therefore, propose the following distinction. A secular ideology is one in which the conclusions follow via induction and deduction from premises drawn from sensory experience and from innate knowledge, if such a thing exists. A religious ideology takes its premises not merely from innate knowledge and sensory experience, but also from Revelation, which is defined as knowledge that cannot be derived from either, but is given by an external power.

The other issue is, perhaps, more important. From the point of view of most secular ideologies, our progress through life is like a boat crossing an ocean. We have several maps, each with different shoals and currents marked upon it. Our job is to decide which map is correct, and then to follow it. From the point of view of Christianity things are rather different. The ship is sinking, if it has not already gone down. We are clinging to the flotsam among the waves, and the sharks are circling. However there is the sound of a helicopter above, and we think that we can see a rope through the spray. Our concern for the moment is simply to survive and our choice, if it is one, is whether or not to take the proffered rescue.

There are a few things I should make clear. First of all, I am not suggesting in any way that non-Christians have it easy, or never encounter trauma or suffering. Far from it. I just believe that life is far easier with God than without. It even used to cross my mind that it was, in some way, cheating. In fact, living life with the help of God, from the Christian point of view, is cheating in rather the same way as it is cheating to run a marathon using two legs.

The comparison is merely meant to indicate that if Christianity is correct, then matters are rather more urgent than we had thought. It is not a solely academic discussion. What hangs in the balance is everlasting life or eternal death, and we do not have it in our own power to secure that life. If Christianity is correct, it is a life raft to a drowning sailor, not just a map. It would be rational for the captain of a ship to deliberate long and hard over which map is accurate. But it would not be rational for the sailor to refuse the rope flung at him for fear it is a mirage.

I am not for a moment suggesting that one should not think rationally about Christianity. It would be a foolish sailor who failed to check if the thing he was grasping was a rope or a serpent. I do not mean to repeat the old reproach, “Do not think, but believe”. But rationality itself demands a different approach to Christianity as an ideology.

There are other questions and objections, yes. You may not want to serve the Christian God. You may think that Christianity is nonsensical. I know I have had all these doubts in the past, and more. However what I will say is this. First of all- and in comparison to what is next this is really just academic point scoring- on logical grounds there is a real difference between a religious ideology and a secular one. Secondly, that difference seems to me to rationally require a different attitude towards it.