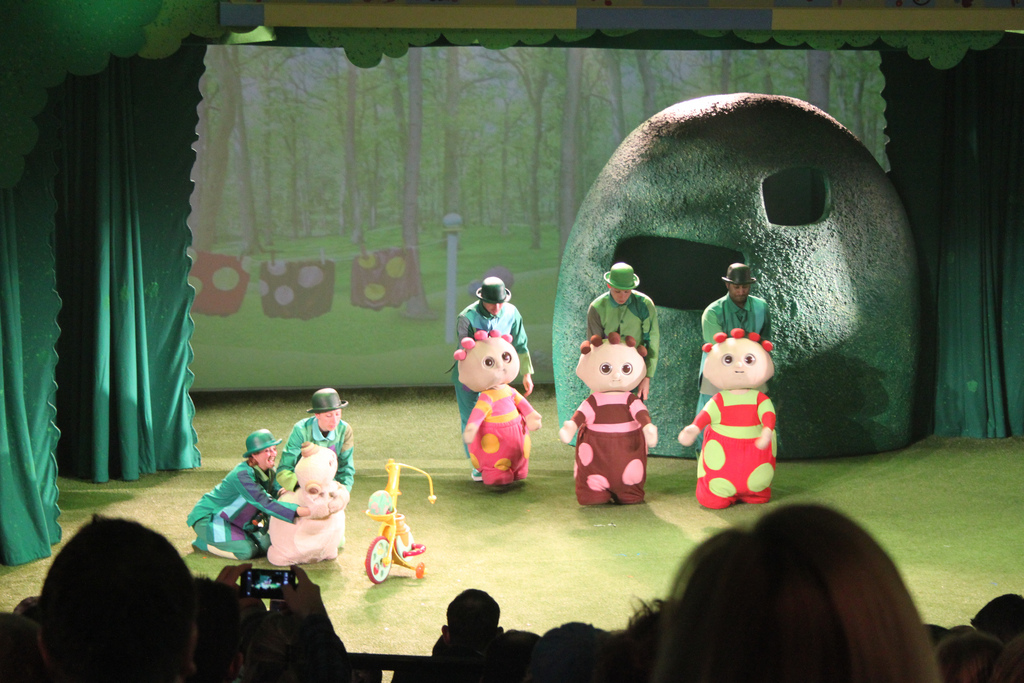 In The Night Garden:A children’s show loaded with philosophical issues.

In The Night Garden harks back to the glory days of weird but gentle kids’ TV, when premises for shows were thrown together out of whatever mangy old toys the production team could find in the store cupboard. It is also that rare thing, a children’s television show that demands patience of its viewer; almost nothing happens over the course of a 25-minute episode, and it takes its sweet time about it. And yet, like Shakespeare, all of life is contained within. Perhaps that is why Sir Derek Jacobi was chosen to narrate. It is certainly hard to believe that anyone else could deliver the advice not to spill your pinky-ponk juice with such conviction.

We begin with the stars above. All is black but these pin-pricks of brilliance rotating in the eternal serenity of the Cosmos. One calls to mind Immanuel Kant’s awe and reverence for two things: the starry firmaments above, and the moral law within. 3 year-olds probably haven’t got to that stage yet, but it’s a start.

The Garden itself is found somewhere beyond these stars, or possibly far away to sea – the opening sequence is deliberately vague so as to keep up an air of mystery about the place. It is a place tangible but unattainable. In Judeo-Christian terms it is Eden, with no trace of antagonism or Sin to be found and everything fresh with utopian creation. In Platonic terms it is the Good that we yearn for whilst caught up in our daily struggles. In normal terms, it is a happy place.

Genesis 1:15: “The LORD God took the man and put him in the garden of Eden to till it and keep it.” This Garden is kept by a rather podgy elf-like philanthropist called Makka Pakka, whose activities include saying his own name a lot and cleaning the garden with his all-in-one garden-cleaning machine. It is humbling to watch him go about his (divinely ordained?) task with such cheerful acceptance, and there is something transcendent about his all-embracing relationship to nature that we can all reflect on and learn from. And, if that weren’t enough, he does an adorable little dance.

Other characters are less purposeful in their to-ings and fro-ings; Upsy-Daisy and Igglepiggle are the archetypal free-spirits, dancing through the Garden with almost Dionysian gaiety but hardly with destructive force, and both prone to tremendous outbursts of affection which are cheering to see.

Like much good philosophy, In The Night Garden also challenges our perceptions; perspective is constantly played with, so that characters that initially appear big may seem small when juxtaposed with other larger characters, who may in turn become miniaturized when the camera pulls out and we see the real size of the tree-trunks that surround them. Is the Garden huge, or are the characters tiny? Added to this, the puppetry, people in costumes, background footage and computer animation are all mingled together, so that it is difficult to tell exactly what is “real” and what is illusion. Anyone with epistemlogical and ontological concerns should watch closely.

More than mere escapism, or something to chill out over whilst procrastinating with a cup of tea, In The Night Garden confronts us with questions of knowledge, virtue and the Transcendent packaged up in funny words, singing birds and cuddly toys. A treat for budding young philosophers everywhere.