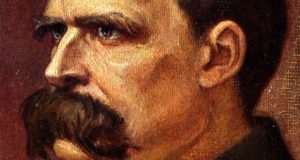 On October 15 2017, we celebrated Friedrich Nietszche’s 169th birthday. Samin Gokcekus looks at his views on morality and why he considered that morality should be ‘questionable’.

Friedrich Wilhelm Nietszche (1844-1900) was a German philologist turned philosopher who wrote on a wide range of topics, making a significant impact on Western philosophy. However, some of his views were critical and extreme, causing many to reject and oppose his position. Some still defend him, but others call him inhumane – unable to overcome his radical views of the world. He has even been characterized as an immoralist. But is this justifiable? What does it mean?

Nietzsche uses his rejection of morality to cause the reader to question the generally accepted standards of morality of the time. However, he doesn’t call for an abandonment of morality altogether. Paul Carus argues that Nietzsche uses “immorality as a philosophical principle.”[1] By rejecting pre-existing information, it could be argued that Nietzsche attempts to remain objective, preventing his understanding of morality and the world from being clouded by prior (and perhaps incorrect) assumptions.

This is where Philippa Foot’s characterization of an “ideological immoralist” comes in. Foot argues that the ideological immoralist asks if “goodness and badness are what they are supposed to be.”[2] Although they accept the concept of morality, they have a different idea of what it should entail. Furthermore, they have a different view of what “human goodness” is.[3] In this way, Nietzsche uses immorality as a tool to get closer to the truth. 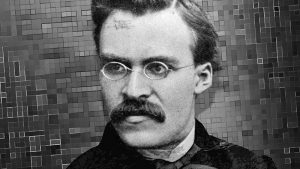 In On the Genealogy of Morality, Nietzsche sets out to outline “an actual history of morality,” arguing that the only way to discover its true value is to understand its origins, and the political and psychological conditions that impacted its formation.[4] However, Nietzsche does little to give justification or proof for the accuracy of his historical account, focusing on his own insights instead. Rather than outlining the historical record, Nietzsche tries to uncover the truth about human excellence.

Nietzsche argues that the word “good” was originally used to refer to those who benefited from certain deeds; actions were judged by their consequences, not by their motivations. Essentially, the word “good” was reserved for describing the “noble, powerful, high-stationed and high-minded.”[5]  However, with the creation of Judaism, a “slave revolt” occurred in morality, resulting in a perversion of words like good and evil.[6]

“Nietzsche uses immorality as a tool to get closer to the truth.”

For Nietzsche, the morality of the time was based on faulty foundations created by the feeling of “ressentiment,” – anger that those who were not noble (slaves, or the “herd”) felt towards those who were more powerful.[7] This anger was fueled by religious authorities who convinced the herd that they were being treated unfairly. The slaves committed the “creative dead” of completely reversing the noble’s values.[8] This new morality substituted “blessedness for happiness;” the blessed being the weak and oppressed.[9] At the same time any form of self-interest became a sin.[10] “Ressentiment” created new “ideals” and “reversed” values; corrupting our understanding of good, evil, and virtue.[11]

According to Nietzsche, this created “herd-animal morality,” which he adamantly rejects.[12] Yet, despite his assertion that our conception of what is “good” has been perverted, Nietzsche still tries to establish what really is “good” and what has value. Instead of blindly accepting the “herd-morality” of the time, he constructs his own understanding of the world and uses it to develop his notion of morality. He rejects that there are moral phenomena, but still accepts that there are “moral interpretations of phenomena.”[13]

In Beyond Good and Evil, Nietzsche criticizes the philosophy and morality of his time by arguing that the prejudices and moral (or immoral) intentions of philosophers bias their philosophy, making it incorrect.[14] If a philosopher is trying to uncover the truth, their philosophy can not be “dressed-up prejudice,” it must be impartial and unbiased.[15] Based on this, Nietzsche argues that a moralist must treat morality as something that is “questionable.”[16] “Shouldn’t moralist be –immoral?” he asks, and perhaps he directs this question to himself.[17] A person who already has strong beliefs (or belief at all) about a subject will inevitably be influenced by their prior views, preventing them from actually attaining the truth.

Nietzsche is committed to the idea that morality is a human construct, denying that objective moral standards exist in the world. However, he is equally convinced that there is a natural rank order of “desires, types of human beings, and forms of life.”[18] Although he attempts to remain “objective,” there are many contradictions in his writing and the foundation for his morality is inconsistent. This makes his work paradoxical, and, in-turn, difficult to understand.

“Nietzsche is committed to the idea that morality is a human construct, denying that objective moral standards exist in the world.”

By presenting such extreme ideas, Nietzsche challenges the reader to re-consider what they believe. It is hard to summarize Nietzsche’s work because it is meant to be read critically and carefully; not just for the sake of reading. Even if the reader is not convinced by what Nietzsche offers, they should be inclined to reevaluate their own views. He makes an important distinction between appearance and truth which is still very relevant today. We are very reliant on appearance rather than genuine truth. Few are challenged to question their surroundings, what they hear, and what they believe.

Without the ability to think critically and sometimes be a skeptic, people become followers of a herd. Blindly accepting what has been established as right or wrong, or acceptable or unacceptable makes us entirely reliant on society for our perception and understanding of the world and ourselves. By doubting what society prescribes and challenging what is conventional, we can become more rational, intelligent, and intuitive beings. As Nietzsche contends, “one repays a teacher badly if one always remains nothing but a pupil.”[19]

In an attempt to uncover the truth, Nietzsche struggles to break free from the foundations of “herd-morality.” However, he does not reject morality itself – arguing for different standards for human goodness and what is good and evil. His ambiguous and contradictory writing challenges the reader to think and become somewhat skeptical of the world as we know it. By presenting extreme ideas, Nietzsche forces us to consider new perspectives. He uses his position as an ideological immoralist, not only to construct his own morality, but also to spark critical thinking and self-reliance in creating one’s own set of values and understanding of truth.

Nietzsche, Friedrich Wilhelm. Beyond Good and Evil: Prelude to a Philosophy of the Future. Edited by Rolf-Peter Horstmann and Judith Norman. Cambridge: Cambridge University Press, 2002.