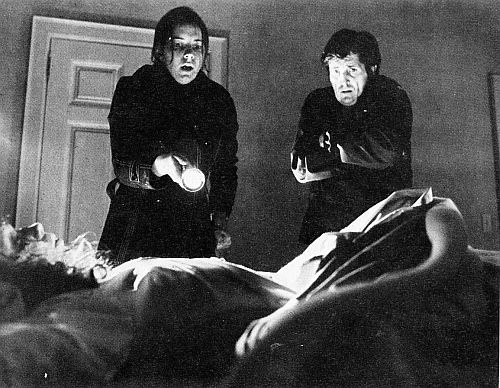 The film’s graphic depiction of demonic possession, and the Catholic rituals used to combat it, still shock and horrify today.

In 1973, American theatres opened their doors to The Exorcist, a modern horror film based on a bestselling book by William Peter Blatty. The film was directed by the Oscar-winning director William Friedkin. The Exorcist brought to mainstream cinema the theme of exorcism, defined by Kim Newman as “a long standing multi-cultural rite in which an invading spirit is cast from the body of a host, by a wizard, holy man priest etc.” (The BFI Companion to Horror)

The movie depicted a 13-year-old innocent girl (Regan) being possessed by Babylonian demon Pazuzu. In the 21st century, it seems the plausibility of demonic spirit possession is at an all-time high, helped unduly by the focus on possession by the Hollywood film industry. Possession stories are a Hollywood goldmine used time and time again to put the fear of God, and awareness of the spiritual realm, into the minds of viewers. How many times have you been that little bit more alert immediately after watching a horror film, as you carefully listen to every creak, peer round every corner and jump into bed hoping that whatever demon you were watching on the TV wouldn’t be waiting to greet you?

The fear The Exorcist stirred in people was unprecedented. After the film’s opening on Boxing Day 1973, word quickly spread about the truly horrific scenes that awaited the audience – such scenes as Regan’s masturbation with a crucifix, her 360-degree head turns, and her projectile vomiting. All of these combined with crass and vile blasphemous language such as “Let Jesus Fuck You”, created a horror film that was both traumatising and disgusting. Indeed, for many people the very sight of the film was too much. It was estimated that in Los Angeles an average showing of the film led to four episodes of fainting, six of vomiting, and many others fleeing in panic. Such hysteria led paramedics and St. John’s Ambulances to be positioned outside movie showings. Some cinemas even provided sick bags to viewers just in case they found the images too disturbing. Evangelist Billy Graham believed that a demonic spirit was living in the celluloid of the film. Yet, through all the horror and disturbing images, there still remains the underlying story of the Catholic Church’s battle with the demonic realm, which has led it to be dubbed by many critics as a deeply spiritual film. Pauline Kael even went so far as to call the film ‘a recruitment poster for the Catholic Church’. Perhaps this is not the first interpretation of the film which springs to our minds; however, the facts are there. The possession case in The Exorcist concerns the Church’s efforts to exorcise the demonic spirits possessing an innocent girl, using the Rituale Romanum – the Catholic rite of exorcism. Indeed, Christian imagery is seen throughout the film, such as in the bloody and defaced statue of ‘Our Lady’, and the aforementioned masturbation scene; shocking moment that show evil at work.

The Exorcist also raises the issue of faith in a modern medical society. Modern culture tends to focus on the medical profession’s way of finding a cure, and any illnesses that cannot be ‘diagnosed’ are investigated through a series of exploratory tests. In The Exorcist Regan is subjected to gruelling medical procedures as doctors try and find a cure for the ‘spirit possession’; when no cure is found, they provide the diagnosis of a brain lesion in an effort to ‘medicalise’ the problem. They also suggest that Regan visits an exorcist because “it works only because the patient believes he’s possessed… it’s purely a force of suggestion”. This is a psychological disorder known as ‘Possession Syndrome’, where the individual holds a certain belief that they are possessed, thus categorising possession as a “mental disorder”. The Exorcist juxtaposes the effect of modern medicine and the effects of faith. This juxtaposition highlights the faith alternative to modern science in a way that promotes the Church. The film provides the audience with a case in which the flaws of modern science can be counteracted by the panacea the Catholic Church provides in relation to spirit possession. A belief which is not often supported in the ‘God is Dead’ generation of today.

Often, as with the critics of The Exorcist, you see enthusiastic and abstract interpretations of certain scenes. Yet none can be more abstract and disturbing than the interpretation of the relationship between Regan’s mother Chris and Regan herself. It is believed by many exorcists, but mentioned in detail in Andrew Dawson’s book Summoning the Spirits that it is through psychological weakness that the Devil is able to possess its victims, yet instead of pure, venerable child-like Regan succumbing to the Devil because she is psychologically weak, Barbara Creed suggests that Regan’s possession is not the work of a demonic spirit but rather the result of a manifestation of sexual development. It appears as a result of the sexual tension in an incestuous relationship between mother and daughter. Creed describes Regan’s scenario as a lesbian variation of the Freud’s Oedipus complex. Regan feels contempt towards her father when he does not contact her on her thirteenth birthday, which subsequently strengthens the relationship between Regan and her mother. This leads to a more sexual love. Regan, like Oedipus, becomes jealous, in this case of Burke, her mother’s new lover, and subsequently kills him in an act of jealousy while she is possessed, so that mother and daughter can carry on their incestuous relationship. This psychological incestuous relationship may have some merit, exemplified in that famous scene with the crucifix: her mother rushes to stop her, then Regan rubs her mother’s face in her bloody crotch while shouting “lick me”. However, some scenes suggest something other than incest, such as when the demon tries to tempt the priests exorcising Regan’s body by asking, “Do you want to fuck her? Lose [sic] the straps [on her] and I will let you go at it!” Despite the lesbian connotations that Creed reads into the film, which can be largely disagreed with, one thing is for certain: director William Friedkin established a way to horrify his audience by placing religion and sex together, as they are still mostly taboos in society’s consciousness. Thus, with the overt sexual content, foul language and the way the film was received by the general public, it is no wonder that it was banned in 1988, when the BBFC refused to give it video classification.

So what can we take from The Exorcist? Whether you want to interpret the film in terms of lesbian relationships between mother and daughter, the Church’s competency in plugging-the-gaps of scientific knowledge about spirit possession, or just as a horror story showing the epic battle between good and evil, there is still something to be gained from watching the film. Almost 40 years on, it remains a classic that shocks and horrifies those who watch it. It is remarkable to think that in the 21st century, an anesthetised audience that sees blood, murder, cruelty, and other horrific scenes every day can still be shocked by some pea soup, a rotating head and some really out-dated special effects. The fact of the matter, however, is that it is not the special effects, the dialogue or the acting that makes this film horrific. It is the idea of possession, that disturbing notion of being invaded involuntarily by something we are too powerless to fight. The concepts of the film are timeless. We will always have this ‘fear’ caused by spirit possession, and fear is a powerful thing.