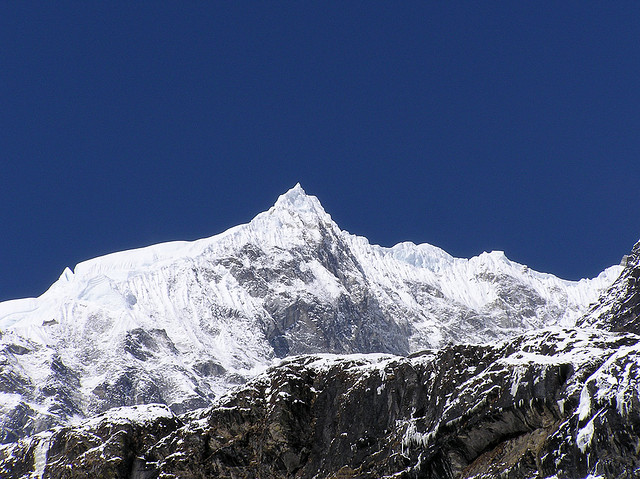 This picture of a mountain is only a dim shadow of the mountain’s reality.

Shortly before Christmas I wrote in that, for Christians, everything we see in the world is a mixture of good and evil; that good came from being like God, and evil from being unlike him. The real world could almost be thought in some ways as a picture or photograph, with reference to a greater reality.

The Christian view of the world says that, in fact, this is actually the case. As well as the world we see, there is another world, sometimes called the spiritual world. The ‘physical’ world, as we might well call it, and the, ‘spiritual’ world are not separate – they are strongly connected, and what goes on in the physical world is strongly influenced by what happens in the spiritual one. And the reverse also applies: things we do in the physical world have consequences in the spiritual realm.

The Bible says that some things in the physical world are ‘shadows’ of things in the spiritual world. The spiritual world in this view is like the real world. It is the reality of which aspects of the physical world are an image, in the same way that a picture of a mountain is an image of the mountain itself. The Bible mentions this idea in the letter to the Hebrews, when talking about the sacrifices made under Jewish law. The implication is that sacrifices in this world were like (and presumably worked in that they were like) something much greater in the spiritual world.

Another example is the way in which God is referred to as the Father, and Jesus as his Son. The relationship between God and Jesus is beyond human comprehension, but it is like the relationship between a Father and his Son (or at least, the ideal form of this relationship), in the physical world. We can try to understand (as best we as we may) the unfathomable concept of the Trinity by comparing it to something in this world we can understand, in the same way that a person who had never seen a mountain could attempt to form an idea of one by looking at a photograph.

Going the other way, for Christians humans are unique in creation in existing within both worlds. Our soul exists in the spiritual world, and although we cannot see it, the actions we carry out will mark this soul, making it beautiful, or stunted and terrible by our deeds. Similarly, the Christian idea of marriage is that it has an effect in this spiritual world of somehow joining the two people involved together.

There are two things to note here. First, it is easy to take from this the idea that the physical world is entirely bad and the spiritual world entirely good. This is an idea that was very prevalent in the Classical world, but it is one which Christianity does not support. It is true that the physical world has become polluted by evil; but it was originally made perfect. One of the strange things about Christianity is how much it seems to like the physical world. God himself took on a physical body, and when we are resurrected at the end of the world, we will still, to the best of our understanding, have bodies.

Secondly, those of you with a fondness for Greek philosophy may have noticed the similarity of this idea to that of the Platonic Forms. However, as far as I understand it, whilst there is a great similarity, the Bible does not say that everything in the physical world is the image of something spiritual, and there is not the same sense of the crushing inferiority of the physical world. The world of the Forms is also rather inert, whereas the spiritual world most certainly is not.

Which brings us on to why this all matters. Whether we like it or not, we are active participants in a great war in the Spiritual world which has been raging since at least the beginning of the universe. In fact, the physical world, or at least our part of it, can be thought of almost as occupied territory. This is an idea I will look at in my next article.

To finish with, there have been many occasions in recent times when the views of some Christians have clashed with the views of society in general. The argument has been often that the Church should change its viewpoint and its actions to be more in accordance with wider society.

However, looked at from this point of view of the two worlds, that argument does not make a lot of sense. Whatever side of the debate you stand on, the things that the church does (or should do) are based upon these more fundamental realities in the spiritual world. Asking the Church to adapt these views purely to fit in with society is like asking a man to change the shape of his shadow by moving the sun.