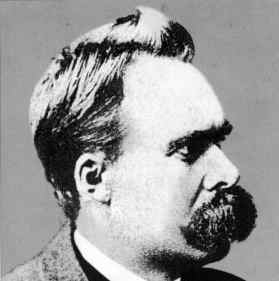 Nietzsche!
He fought the dogs and killed the cats
And bit the babies in the cradles
And ate the cheeses out of the vats
And licked the soup from the cook’s own ladles…

Of course, he didn’t do any of these – not least the last bit, since that moustache of his was hardly conducive to eating soup. I have often wondered about this. Did he wear a net, or perhaps had a contraption whereby he could part the hairy obstacle like a pair of curtains, or perhaps he dived in (as was his way), foaming and frothing and coating his moustache in a crusty, tomatoey mess to save for later?

But difficulties at meal-times aside, what a moustache! How fitting for the man who philosophized with a hammer, who wrote of the Will to Power as the monadic impulse that drives all phenomena, the goal of self-overcoming to be achieved in the Highest Man? What could self-overcoming be for this man, with his eccentric haircut and bulging ping-pong-ball eyes staring into the oblivion of deep thought, if not allowing that godless theraphosa to roam unchecked over his face? In those passages in which he reaches fever pitch, it is almost as if he is at the mercy of control by a being other than himself – that is to say, it is as if the moustache has half-crawled, half-leapt from his face onto the page to write ceaseslessly in its unending, spidery scrawl. It has its own existence, its own dynamic power. It is sublimation.

Compare this to Immanuel Kant, that German statesman of metaphysical order and rationality. Now there’s a man who knew the time of day, and he ran his life as clockwork to prove it. Behold! What do we see in his portraits? Nothing untoward, no hair out of place; everything ship-shape Bristol fashion, and with a face as clean as nun’s re-edit of Ulysses. Nothing could be a greater illustration of the difference in philosophical approach between these two men, one applying order and laws, the other roaming heedlessly over the pastures of rational metaphysics.

Kant, Nietzsche would say, is life-denying; his laws are too rigid, his structures too stifling – in other words, his face is too clean and his haircut too boring (it’s probably a wig, but that is scarcely better since Nietzsche was pretty scathing of deception.) What Kant needs is the amor fati, the will for every future moment, and by extension the will for every past moment leading up to where one is now. Thus have I willed it! And this will to life is embodied in his moustache. Therefore, if we are to take creative control of our own values, and embrace our perceptions of the world as they are, free from metaphysical suppositions of an out there, we too must let that which is within us break out and overcome ourselves.

What does that mean? It means of course that we should all grow a great big Royal bloody moustache – or a biologically-possible equivalent.