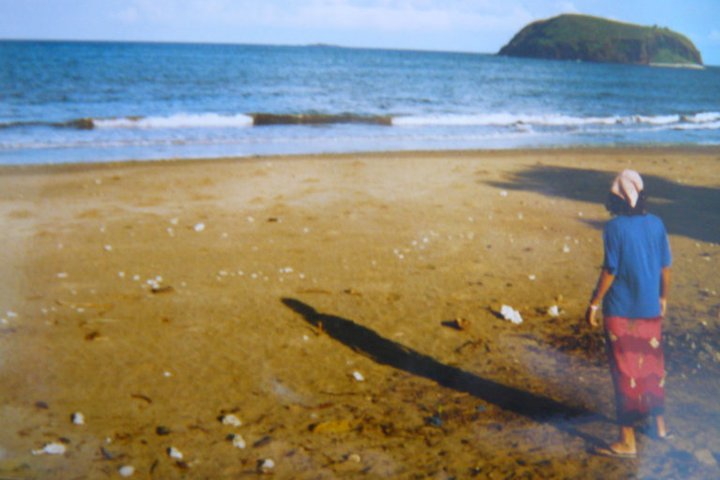 Until very recently, my parents worked as missionaries for a non-denominational Christian organisation. This makes me a “Missionary Kid”, or MK. Apparently. It’s strange, I never considered myself an MK until I moved to England and I’m still not used to it. I was 14 years old, and was plunged into a world full of white people, shiny expensive things, beautiful shoes, and very fat sheep. The music was different from what I was used to, less drumming and more twanging of guitars and screeching of vocal chords. Girls walked around in mini skirts and were unconcerned about showing their navel piercings. The pace of life in England terrified me. So busy. So stressful. So concerned with the future and with finding a place in this world. I felt out of place and soon realised why: genetically, I belonged more to Western Europe than to Africa, but culturally, I was an African. I was a product of my parents’ fervour. I was a missionary kid, and as such, I was torn between cultures. And so I started to ask questions. Who was I? Who was God? Why had he let me become this confused individual?

I was born and grew up in a Muslim country. It is a folkloric sort of Islam, mixed with Animism and a type of Shamanism. I spoke fluent French. I hand-washed my clothes in a metal tub in the shower, our only source of running water. I spent many evenings chasing cockroaches, rats, centipedes and the neighbours’ goats away. I stole mangoes from the fields outside my school. I ate my meals with a spoon or my fingers. I learned to cook at twelve years old. I learned to never put the Qur’an on the floor. I learned not to shut my eyes when a cow or goat was sacrificed and cut up in the middle of the village street, its blood oozing into the dry earth. In the end, I knew more about African culture than I knew about Western European culture. I knew more about Islam than I knew about Christianity. I knew more about spirits and demons than I knew about the Holy Spirit.

I used to think that being a Christian meant suffering for God. I thought it meant moving between schools and houses every two years or so. I thought it meant living an ascetic life since my parents believed that we should live like the villagers – we didn’t have hot water, floors were scrubbed on hands and knees, and from the age of eleven I had to cover my arms, legs, midriff and occasionally my head.

I was never told of the joy of being a Christian, of the personal relationship you can have with God. All I knew was that in the name of Christianity, my parents had decided that this was to be our life. God had decided that we were needed in this land, and no matter how many times our house was broken into, no matter how much I missed my family in Europe, no matter how much I hated having to fit all my belongings in one small box this was my parents’ and God’s will and as such I had to obey, without question. I never asked why. I just accepted it and got on with life. Africa was my home. I was used to living five minutes away from the beach, to being nearly as brown as my friends, to seeing people act strangely under the influence of demons, to men having several wives and to not eating pork. The pros outweighed the cons and so I only started to question this life when I moved to England and realised how much I loved and missed Africa.

I spent two weeks of my first English summer at a youth camp called Soul Survivor. There were thousands of young Christians. It was weird; during the previous three years I’d known a total of three Christian teenagers. And, strange as it may seem, despite having lived under the roof of missionaries, I became a Christian that summer. For the first time in a long while, I didn’t have to look after toddler missionary kids and watch reruns of The Prince of Egypt because it was one of the few video tapes we had in English… I was actually being preached at: I was the one on the receiving end of missionaries. I finally started to understand the meaning of servitude to God and to humanity. I understood why my parents spent so many years learning African languages and living with and serving the people in the village rather than taking the easy way out and living in gated communities like the French ex-pats. And yet, despite this amazing revelation and experience, my faith plunged dramatically a year or so afterwards. Why? Because my parents and my little sister went back to Africa, leaving me to live and study in England.

(I even wrote a few emo songs…)

I started getting into fights with my grandmother, developed an eating disorder, skipped Church and shifted the blame for all my troubles onto God and onto my parents for doing what God had supposedly ordered. I stopped praying. This went on for years, and eventually after my A-levels I moved out of my grandmother’s house and rented a room in a family friend’s house. I got a job in direct sales.

And then, at some point half-way through my gap year, after a particularly alcohol-fuelled night with work colleagues, I went for a walk in the English countryside. And as I saw the rising sun something broke inside of me, like a piece of string bowed under the weight of a heavy burden. Standing in the middle of a field, I cried, and I cried, and I cried. And almost trance-like, I started apologising for everything, for all the things I had done wrong, for my anger towards God and my parents. And then I felt so calm. So utterly calm. And I talked to God. I believed he was there, right beside me, guiding me step by step.

Ever since that day, I’ve not been too sure how to define my current religious beliefs, my faith. For years I was the Christian kid in an African Muslim society. Then, I was the teenager who felt abandoned by God and her family and who rebelled. Now, I guess that I’m the student seeking to know who God is, what he has planned for me and what he has planned for the world. I believe in God. I believe in God the redeemer, the loving God who allows us to reject him, the God who heals broken hearts and souls. I believe this God is worthy of worship. And I believe that I don’t just answer to myself and to society, but that I answer to my Creator too.