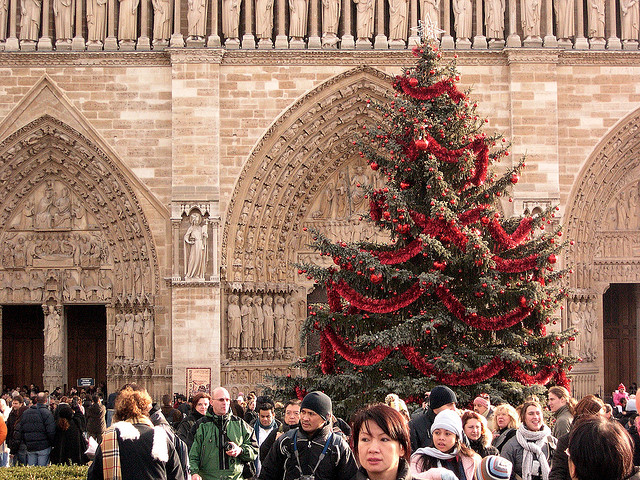 ‘Christmas’ inevitably conjures up a rich variety of meaning in the British mind. For no two people will Christmas ever mean exactly the same thing. We all have our own special traditions. For the majority, these may include the exchanging of Christmas cards, the devouring of hundreds of Granny’s mince pies, the hilarity of family charades or the ingenious culinary usage of turkey where you least expect it. But for many, somewhere in this sleigh ride of activity is the obligatory Carol Service. Christmas just wouldn’t be Christmas without having a good old sing song of ‘Hark the Herald Angels Sing’ in the magical atmosphere of a candlelit church.

This produces an extraordinary opportunity for the Church. Parish Churches around the country may, for once, be filled with families; people they spend the rest of the year desperately struggling to recruit. Young families, older couples, disenfranchised men, single mothers, professionals in the 20–30 age bracket; the lot. A captive audience. This unique annual event in the complex makeup of Britain’s religiosity presents three important questions. Firstly, why is it that people who would usually never dream of setting foot in their local Church and almost certainly do not ‘believe’, suddenly become quite content to proudly and piously process up the aisle with their Christingle oranges, lustily sing out confessions of Christ incarnate and reverently pray to a God they ignore for the rest of the year? Secondly, what do these non-Churchites expect from the Church? And, thirdly, how should the Church respond to such a free marketing opportunity?

It is almost as if, a new, and very British religion is developing in the wake of secularisation in our society. A religion that involves an alternative moral voice to balance out the capitalist business world and rational, utilitarian approach of our democratic system. A religion that involves the use of religious blessing to give extra gravitas and authority to special events like weddings. And, ultimately, a religion which focuses on spirituality as a solution for healthy wellbeing. The complex diversity of religious belief in Britain has inevitably led to a desire to find common ground. Common ground between religions, as seen in the many interfaith movements which have sprung up in recent years. Common ground between Church and State. And common ground between the religious and the irreligious.

Many argue that this common ground can be found in ‘spirituality’. This is an acknowledgement of something greater than ourselves, whether a force or a deity. An acknowledgement of the feeling most of us have that there must be something more. Something more to life than breakfast, work money and bed; something more to life than rational science, than good and evil. We can all agree that there is a spiritual need within most of us which needs to be fulfilled, whether this is through traditional religion, yoga, meditation or seeing the therapist. Indeed, the NHS is now addressing what they perceive to be the need for spiritual care, as seen by the introduction of the Spiritual Care Policy in 2009.

In other words, spirituality is more inclusive than any traditional organised religion could ever be. Christianity asks members to submit to specific beliefs such as the incarnation and the virgin birth. Such specific beliefs cannot be reconciled with other religions. In confessing belief in Christ as the son of God, you discount the belief sets of Judaism, Islam and Hinduism. And, in our tolerant society, who is to say that they are not right and we are wrong? Therefore, spirituality seems like a valuable solution, simply acknowledging the presence of something greater than ourselves, the need to discover ourselves and find the meaning of life, without committing to any particular religion. I would argue therefore that, if anything, it is spirituality rather than religion which will conquer the growing tide of post-enlightenment secularisation.

So, in answer to the first question, perhaps it is a yearning for spirituality which draws people into church once a year to celebrate the birth of the Messiah. However, when we consider what it is that these people expect from the Church, we realise it is tradition. What if, one year, they turned up for their traditional carol service only to be greeted with hushed meditation and humanitarian lyrics projected onto big screens rather than robed choirs and archaic phraseology. There would be outrage; a confusing contradiction on the part of a British public who expect the Church to move with the times and adapt to modern society. This leads us to the third and final question. How should the Church respond to this?

It is fair to say that the Church seems to be attempting to monopolise on the seeming move towards a more secular spirituality. The theme of reflection was interestingly taken up this year by the Queen in her televised Christmas address to the nation. Far from the old British notion of ‘Keep Calm and Carry On’, this spoke more of ‘Keeping Calm and Taking Stock’.

‘We all need to get the balance right between action and reflection. With so many distractions, it is easy to forget to pause and take stock. Be it through contemplation, prayer, or even keeping a diary, many have found the practice of quiet personal reflection surprisingly rewarding, even discovering greater spiritual depth to their lives.’

Similarly, Archbishop of Canterbury, Justin Welby has recently provoked controversy in suggesting an alternative baptism service in which parents and godparents do not have to ‘repent sins’ and ‘reject the devil’ so as to make the wording easier to understand. The former Bishop of Rochester Michael Nazir-Ali has criticised the reform for reducing Christianity to ‘easily swallowed soundbites’ and many have expressed concerns that this will dumb down the institution of Baptism for the benefit of those who only attend Church for ‘special occasions’. How should the Church respond to the opportunities provided by these ‘special occasions’?

Well, for a start, they should learn to acknowledge the fact that it is an opportunity, and an evangelistic opportunity at that. Whilst the likes of Justin Welby may be attuned to this, it remains a sad fact that local church wardens and flower arrangers will continue to be a tad resentful of the annual influx of people who ‘just turn up for the big events’. In a way, they should not be blamed for feeling a slight irritation at intruders. They are there Sunday after Sunday and this is only human nature after all. However, the opposite extreme of this inclusivity is the Justin Welby approach of changing the services to fit the people. Given that people seem to be comforted by the traditions provided by the Church, this does not seem right either.

I think a more sensible approach is actually that presented by the Queen in her Christmas address. The Queen herself embodies tradition, in terms of the British monarchy, but also in terms of her own strong Christian faith. And yet, during this address, she was able to simultaneously balance this, through discussion of ‘taking stock’ through prayer, meditation or diary keeping, with an acknowledgement of the ‘spirituality’ increasingly accepted in British society.