It’s (yet another) APOCALYPSE! 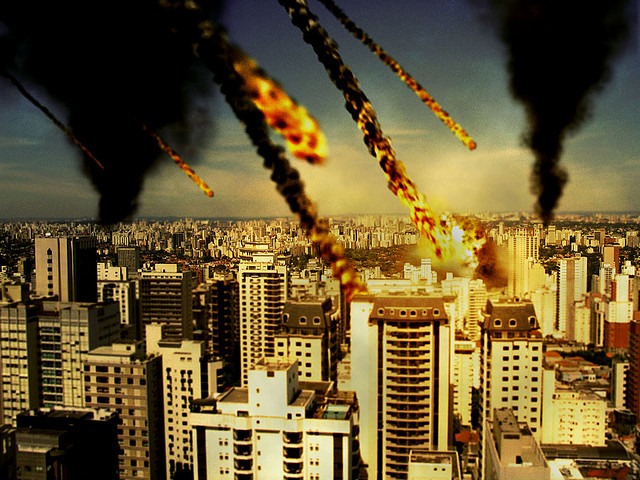 ‘’The first angel sounded, and there followed hail and fire mingled with blood, and they were cast upon the earth’ – Revelations 8:7.

Many will remember Harold Camping’s doomsday predictions for the 21st May 2011. I remember it well because this proclamation came out around exam period, and I thought that so long as the Rapture would save me from my exams – only costing me the eternal suffering of my body and soul – I wasn’t entirely against it. But what Camping suggested wasn’t new or especially profound, because it has all been said before.

Indeed, he even predicted the Rapture back in 1994; this time, however, he was convinced of the accuracy of his calculations, which were drawn from a calendar hidden within the pages of the Bible. He categorically informed the world that God will save some selected Christians (only 200 million out of approximately 2,000 million worldwide), while the rest will be left behind to face apocalyptic scenes of earthquakes and fire; of course those who aren’t Christian at all will definitely perish in hellfire – Camping has left us with a truly pleasant thought with which to start Michaelmas term.

Luckily for us, no such event happened back in May (unless it did and we are living in the world of the Matrix : is that you, Morpheus?); instead the world woke up alive and well on the morning of the 22nd to ridicule Camping. What was his defence? He simply said that he had “misunderstood”: quite possibly the biggest understatement of the century. In a casual sort of ‘Oh by the way’ he added that he meant that the Rapture was to be a spiritual event, and not a literal one on May 21st. It is ironic that this hard-line literal interpreter of the Bible would amend his original statement with a spiritual qualification.

But in case some avid Rapturists would be disappointed (especially some 250 clients who spent 130 per pet to have them looked after by an [atheist] business set up to look after the pets of those destined to be raptured – fittingly called ’Eternal Earth-bound Pets’) he has assured them not to worry: there will surely be damnation and hellfire! The burning lake of sulphur for the gay and immoral is on its way – we only have to wait a few months. A sigh of relief for those who follow Camping and a groan of disbelief for the rest of the world; we thought this madman might finally shut-up; we were wrong.

So in a few weeks from now, Camping predicts there will be the physical stage of the Rapture. However much Dawkins likes to portray crackpots in Christianity as the mainstream, the reality is that only the tiniest minority believe in Camping’s mad eschatological predictions. His ideas are at the very outer fringes, and he has been widely derided by mainstream Christianity. But the Apocalypse is surely an important part of Christianity. The Apocalypse is a biblical idea and is linked with the Return of Christ. Without it, there will be no universal judgement, no salvation and no damnation. Mainstream Christianity certainly hasn’t criticized Camping for his certainty of belief in the end of days. So, apart from the fact he was simply wrong in his calculations, why should Camping be criticized for an idea which is apparently grounded in Scripture?

There is an historical answer and a theological answer, both mutually supporting the reality that no man can predict a supernatural event. The historical answer lies in the obvious: eschatological predictions are almost as old as the evolutionary beginnings of reason, intellect and communication in early Homo sapiens. And in the scope of recent history, dates have been repeatedly set for the world to end only for that day to come and go without comment.

Can you imagine all that effort with biblical calculations and it amounting to nothing? It must be very disappointing: they must wish for at least one incident of apocalyptic significance – why not a volcano erupting or a minor hurricane – it doesnt even have to hurt anyone, just something! There are hundreds of examples. Isaac Newton wrote his prediction of the end of the world in his notes. Another case is the Devonshire woman, Joanna Southcott, who claimed in 1814 (at the age of 60) that she would give birth to the second Jesus. The second Virgin Mary, how original – this time in England! And, of course, Camping predicted the world to end in 1994; it must always be the elephant in the room at his Christian Rapture gatherings

The theological answer lies in the pages of the Bible. Perhaps not a very convincing argument for many readers, but what better ammunition is there to use than biblical bullets against a radical evangelical whose very sword, shield and armour is Scripture? The biblical and Christian answer must be that the apocalypse will happen at an unknown date. Indeed, Christianity has never needed to know the date. When talking about the world passing away, both the Markan and Matthean Jesus said that nobody knows (Mark 13:32, cf. Matthew 24:36) – not even Jesus knew. Furthermore, the apocalypse will be signalled when Jesus returns. But this date is again unknown because his return will be like a thief in the night (1 Thessalonians 5:2). Christ’s return will be unpredictable and it should not be based on one old man’s much-publicised calculations.

Contrary to this, Chris McCann, a member of eBibleFellowship and a supporter of Campings Rapture theories, has been guilty of trying to pry into the mind of God. When asked whether past failed predictions placed any doubt in his mind, McCann replied, “It would be like telling the Wright Brothers that every other attempt to fly has failed, so you shouldn’t even try.” The engineering pursuit based on scientific principles which made flight possible and attempting to date the end of the world based on biblical numerology are not comparable activities: it is a categorical mistake. The Wright brothers were dealing with tangible science, which is based on experimentation, observation and evidence, whereas McCann and Camping are probing for answers to an impossible question, a question which is shrouded in the deepest metaphysical mysteries known to humankind

So, come October 21st, should we be quaking in our boots? Probably not. We’ll probably wake up the next day to read about Camping’s further revision and get on with our lives; I’ll probably have a hot chocolate in Saddlers.