The inextricable relationship between Christianity and American politics: religion in the inauguration ceremony. 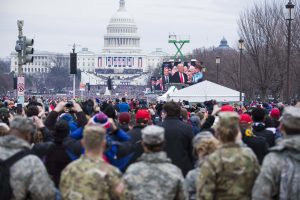 On January 20th, love it or loathe it, Donald Trump was sworn in as the 45th president of the United States of America. His inauguration ceremony featured a number of religious firsts, but Christian themes within American politics is far from a new concept. In fact, almost all US presidents have claimed affiliation to Christianity since George Washington placed his hand on the Bible and was sworn in as the first US president. So why exactly does faith have such a role to play in American politics? The US constitution prohibits any religious requirements to take the presidential office, but this hasn’t stopped the development of a prominent Christian trend. To answer this question, an examination of the voters, the American public, is necessary first and foremost. Indeed a recent survey by Pew Research Centre has revealed that half of American adults see it as important for a Presidential candidate to share their religious beliefs. In addition, the number of people saying that they want to hear more discussion of religious beliefs by candidates far exceeds those saying they want to hear less of it.

Trump has been no exception to this theme, and religious messages were a prominent feature in his electoral campaign. Looking to his upbringing, Trump was raised by Presbyterians and attended Marble Collegiate Church in lower Manhattan. He still considers Marble Collegiate to be his church despite not attending regularly. The church was described by Huffington Post as one of the, ‘oldest continuous Protestant congregations in North America.’ Trump attended the services of Reverend Norman Vincent Peale, which were seen by many as simplistic and generic. Peale was certainly more interested in values and sensibility as opposed to Biblical specifics, which has transferred in to Trump’s attitude to faith today. The Christianity promoted by Marble Collegiate Church is a loose doctrine, evidenced by Trump’s acceptance of his daughter Ivanka’s conversion to Judaism following her marriage to a Jew. So what role did religion play in Trump’s inauguration ceremony?

As previously stated, religious features are not new to presidential inauguration, but Trump’s ceremony was unique in many ways. Firstly the featuring of six religious speakers is more than any of his predecessors chose to feature, as Trump recruited five Christians and one Rabbi to participate in the ceremony. Rabbi Marvin Hier was the first Jewish speaker at an inaugration, and Paula White, the president’s spiritual adviser, is the second ever female religious speaker. These breaks with tradition continue as Cardinal Timothy Dolan was the first Roman Catholic to participate in an inauguration since 1977. In addition Samuel Rodriguez feautred, the first Hispanic and Assemblies of God pastor to play a role in a presidential inauguration, who has praised Trump’s policies on abortion, religious liberty and the Supreme Court. He told voters that having conservative justices restored in the Supreme Court was more important than immigration issues, after previously opposing

Perhaps the most controversial choice made by Trump was his inclusion of Christian speakers who promote the prosperity gospel.  Paula White, who was described by Daily Beast reporter Betsy Woodruff as spending, ‘her life taking money from gullible people in the name of religion,’ is a preacher of the aforementioned prosperity gospel. This gospel is highly controversial, taking the view that God rewards increasing levels of faith with greater amounts of wealth. Trump’s own inauguration speech not only mentioned God, but also made several direct references to Jesus Christ. This kind of celebration of Jesus is the primary reason for his wooing of Evangelicals; in November’s election 81% of Evangelicals voted for Donald Trump. Trump stated that we must, ‘unite the civilised world against Radical Islamic Terrorism, which we will eradicate completely from the face of the Earth,’ and he backed it up with Psalm of David : “The Bible tells us, ‘how good and pleasant it is when God’s people live together in unity.’ The ceremony also featured the singing of two church choirs: The Mormon Tabernacle Choir and the Washington National Cathedral Choir of Men, Boys and Girls.

Whilst many celebrities dodged the inauguration ceremony, perhaps to preserve their reputation or due to a genuine loathing of the new president, many religious leaders clearly felt much more willing to be open about supporting Donald Trump. For such an unpopular and controversial president throughout the world to have such support from the religious sphere raises serious questions about the Christian undertow within American politics.