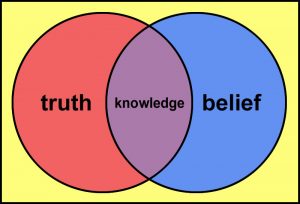 “Can I know anything?” was the question posed to me in one of my first philosophy lectures of this year, and indeed in my life so far. “Discuss it with the person sitting beside you,” he said but I knew from the under the breath “this is f****** ridiculous,” that an open-minded discussion about global scepticism was not going to be on the cards that day. My friend’s pragmatic mind didn’t have the patience for an aspect of philosophy so irreconcilable with everyday life. I remained more optimistic and wondered whether this would be the lecture that changed my life, the professor that challenged me in a way outside of academics. After all I had to have at least one lecture like that right? At least, everyone in the Hollywood coming of age films about going to university did…

As someone studying philosophy for the first time I was excited by Descartes. Upon first reading his work I fell in love with the idea of this man sitting on an arm chair, deciding that he had finally reached a point in life where he was mature enough to reflect upon what he believed. He sits there and realises that he could have a dream in which he was also sitting there; if this dream mirrored real life then how could one differentiate between the two? How could one know that the world that we see around us, the sense data that we take as infallible, is actually all there and not created by a dream, or an evil demon sent to plague us?

Descartes finishes his first meditation fatigued by this idea of global scepticism, which he characterises as a ‘laborious wakefulness’ and ‘excessive darkness.’ As a religious man he cannot stomach the idea that everything in this world might be illusory and therefore without meaning. Predictably he concludes that because of his certainty in the existence of
God and because of the predicates of this God, it simply cannot be that this world is fabricated to trick our senses into a false sense of security. This seemed like a bit of a cop-out to me, it was an anticlimactic ending to my philosophical first love. But I soon realised that, like the mass of philosophers and students who have preceded me, I wasn’t going to be the person to resolve the problem of global scepticism.

The beginning of the university experience was speeding by and after two brief 50 minutes lectures the professor was on to a different topic. I was swept up in first year, where Wiffwaff and choosing a house for next year occupied more space in my mind than the course I was studying. The man in the armchair with his evil demon grew smaller and smaller in the back of my mind. To quote Descartes himself, “this task is a laborious one and insensibly a certain lassitude leads me into the course of my ordinary life.” The excitement of global scepticism, this previously new and wild notion, inevitably wore off. I hadn’t had the life changing experience I’d first naively envisioned; I had a few pages of disjoined notes and a half-hearted essay that I’d coughed up in the last week of term.

Perhaps it’s just timing, perhaps it’s like Descartes said and I need to wait until I’m more mature, until I’ve seen more of the world and gained a better understanding of myself. Maybe then I’ll be less distracted by life, less self-involved and  able to sit back and let philosophy consume my mind in the way I’d hoped it might. But then again maybe it won’t, maybe I’ll just move on and pick modules that seem to be a bit more practically orientated next year, adopting the attitude of my friend sat cynically beside me when I first saw the question, “Can I know anything?” projected on the screen in front of me. In this fast paced, information driven age, philosophy can easily fade in to the back of one’s mind. All the same I hope it doesn’t, because even if I’ll never be able to prove with certainty why I know the things I know, at least I’ve asked myself the question.