Hermeneutics in a Religious Context 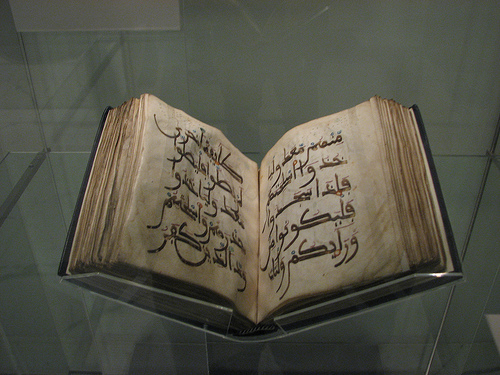 With interpretations affecting millions, how should we approach this?

The celebrated Islamic scholar Hamiduddin Farahi pioneered a school of thought concerning Qur’anic hermeneutics. For him a text is brought to understanding as a whole by relating each individual part to a coherent structure that has its own central theme. Like the famous biblical scholar Matthias Flacius, who played a vital role in working out new theories for biblical interpretation, Farahi laid a new foundation for the development of Qur’anic hermeneutics. He opined that the Qur’an is not a set of discrete verses; instead it is an organic whole wherein the verses are integrally connected. Furthermore, a verse should be interpreted in the nexus of the other verses, that is to say, the Qur’an should be interpreted in the light of its own rather than by any other external authority.

One school of thought regards interpretation as a kind of dialogue between the author and the interpreter, and this dialogue takes place at the spiritual level. The interpreter must have a talent for understanding the mentality of the author, as without it the explanation of the text is not possible. Thus the grasping of a text is characterized by a twofold enterprise: first, the interpreter has to understand the text by a dialogical process at the spiritual level and second, he has to explain his understanding to others.

The celebrated German theologian Friedrich Schleiermacher’s hermeneutical philosophy forms part of the foundation for the study of hermeneutics. He defines hermeneutics as an “art of understanding”, i.e., it is to deal with the process of understanding a text and its modes of interpretation. He considers a text as an utterance whether spoken or written. Furthermore, an act of speaking is only an outer sign of thinking, thus “hermeneutics is a part of the art of thinking”, and is, therefore, philosophical in nature. There are two dimensions of interpretation namely grammatical and psychological; grammatical because the text is an act of speaking that is always expressed through language, and psychological because it is a manifestation of the speaker’s, or the author’s thought.

For Schleiermacher, understanding a speech [text] always involves two moments: to understand what is said in the context of the language and its possibilities, and to understand it as a fact in the thinking of the speaker [the author]. Understanding a text depends upon the coherence of these two moments and neither of the two dimensions is of more importance, rather both are equally crucial; both of the dimensions should be applied simultaneously on the text to understand it. Keeping in mind this task, the interpreter should be competent linguistically, and also able to understand people psychologically.

Schleiermacher’s notion of the grammatical interpretation is based upon the two canons of thought: 1. “A more precise determination of any point in a given text must be decided on the basis of the use of language common to the author and his original public”. 2. “The meaning of each word of a passage must be determined by the context in which it occurs.” The first canon can be grasped by making a distinction between meaning (Bedeutung) and sense (Sinn) of a word. Bedeutung, for Schleiermacher, is something that a word is thought to mean “in and of itself”, while Sinn is something that “the word is thought to mean in a given context”. So a single word could acquire a range (Cyclus) of various meanings. In the interpretation of a text, the meaning of a word should be determined by the sense in which the author used the word in the language shared by him with his original public. In order to achieve the task of the grammatical interpretation, the interpreter should be very well equipped with a comprehensive knowledge of the language shared by the author and his public. This kind of knowledge can be obtained if an interpreter grasps an author’s linguistic “sphere”, which is constituted by the various factors of the author’s life and his age.

According to the second canon, a passage in which a word occurs constitutes a “determinative linguistic sphere”, a context within which the meaning of the word is to be determined. Likewise, the whole of the text is a context in which a passage can be understood. It may be that one moves, in order to decipher an appropriate meaning of a word, from the second canon to the first. When the context of a passage is not sufficient to explain the meaning of a word, “one must turn to other passages where these same words occur, and under certain conditions, to other works of the author or even to works written by others in which these words appear. But one must always remain within the same linguistic sphere”.

As stated earlier a text is, for Schleiermacher, an act of speaking, that is, a linguistic manifestation of an author’s thought. So the meaning of the text is grounded upon the act of a speaking. This speech act of an author amalgamates the two aspects of his personality: the inner system of his thought, and the system of language as its outer expression. Therefore, both grammatical and psychological interpretations are applicable to the text at the same time.

Considering Hermeneutics is perhaps one of the more complex aspects of the interpretation of religious texts. However it is one that can be immensely rewarding.