Gettier Cases and the Problem of Knowledge 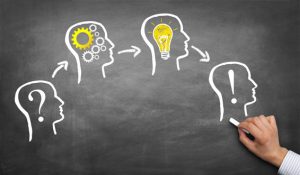 In ancient times, knowledge’s definition as a ‘justified true belief’ was introduced and developed throughout the centuries. The definition states that, for one to say that they have knowledge of something, they must believe that the statement in question is true, they have to be justified in believing that statement, and the statement itself has to be true. However, in 1963 Edmund Gettier showed that even when these three conditions are satisfied, there are cases in which one cannot claim knowledge of a certain statement. The way Gettier presented his case will be analyzed below. I will argue, further, that Gettier cases do not show that knowledge is not justified true belief. However influential Gettier might have been considered in demonstrating that, contrary to the traditional account of knowledge, belief, truth and justification are not sufficient for knowledge, he had based his examples, and subsequently his arguments, on false assumptions on the notion of justification. Namely, that knowledge is nonmonotonic. Gettier’s notion of justification does not regard infallibility as a factor to consider when judging justification, something that is of crucial importance to the notion of justification. Moreover, Gettier’s examples do not share the same degree of locality, something vital to his justificatory attempts. Therefore, not fairly judging justification, Gettier tries to attack the traditional account of knowledge on false grounds. 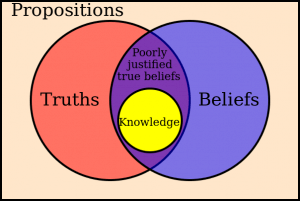 To begin with, Gettier presupposes an account of knowledge which is nonmonotonic (Williams, 2001). According to Gettier’s account, knowledge can come and go in accordance with giving up old facts and acquiring new ones. However, it seems difficult to accept such an unstable notion of knowledge. The case is that p remains constant and consistent all along S’s claim for knowledge and is independent of S’s informational state which can be ever-changing. Gettier, adopting an internalist notion of justification, emphasizes on subjects and not objects, thus making knowledge non-static – as the world of subjects is. He does not question whether objects can be knowable per se but focuses on the individual agents, whose reasoning can be fallible. Gettier considers that justification is present when an agent S believes that she has justificatory reasoning for proposition p. Relying on the subject’s reasoning to define “justification” in every situation, however, is far too subjective for the term. It is questionable, therefore, whether in many circumstances one can be regarded to have justification when that person’s reasoning, is not only unconscious but also implicit. (Williams, 2001). Justification is not to be provided by S but from p, for which S is trying to establish justification for. S can claim to have knowledge that p is true if S’s grounds for believing p are true (Clarke, 1972).

Whether S’s grounds for believing p are true, however, does not depend on S but on p itself. Therefore, S’s knowledge in such cases depends on coincidental factors, as S could just have been lucky in acquiring the belief that p is true. Hence, coincidental factors determine if S has knowledge that p. Coincidental factors do not, however, make knowledge stronger or weaker, as they do not exist on the ever-changing world of S, but on the static nature of p. On these grounds, Steup’s (1998) amended account of knowledge whose fourth condition is: “There is no proposition d that factually defeats S’s evidence for believing that p.”, is plausible as it bases knowledge that p on the external, to S, world and not on S’s internal justification which has the possibility of being fallible. On the barn case (Goldman, 1976), S’s justification for believing that p may make it true beyond reasonable doubt for her that she sees a barn. However, she does not have evidential justification for seeing a barn, as he does not have access to d, thus he cannot claim to have knowledge (Chisholm, 1966). Justification must be both evidentially and factually undefeated to count as knowledge (Steup, 1998). 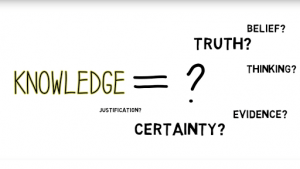 Moreover, justification on the above grounds must also be infallible to count as a factor for knowledge. When S claims that “I know that p, even though I might be wrong” this argument is self-refuting for absolute certainty is required for S to be justified in claiming that he knows that p. If S can accept that his justificatory grounds can be wrong then S will not make the claim that she knows that p. Specifically, on Gettier’s paper (1963) even if Smith’s present informational state could not allow him to think that he could have had 10 coins pocket and get the job, or that Jones did not drive a Ford and Brown was in Barcelona, he could not claim that he possessed knowledge as he acknowledged that his claim for knowledge could be refuted by new information, and it was not infallible and therefore not undefeated.  In such cases, justification that is indefeasible is required to regard p as knowledge.

As Williams(2001) puts it “No one counts as knowing something if there exists a true body of evidence such that if he were aware of it, his original justification would be undermined or defeated”(p.49). S does, or does not, know, that p all along and this is unrelated to S’s informational state. Also, Feldman(2003) argues that S could not be justified in believing a false proposition and that it was just the case that S’s evidential state was insufficient to amount as justification for knowledge. Even when ones reasoning is proper in arguing for the justification of a falsehood, the result is unjustified.

In addition, Gettier (1963) makes the claim that “[..] for any proposition s, if S is justified in believing p, and p entails q, and S deduces q from p and accepts q as a result of this deduction, then S is justified in believing q.” This is the Justified Deduction Principle. This principle seems absurd when one thinks of it in terms of locality of p and q. Taking Gettier’s first case, let’s take p to be “Jones is the man who will get the job, and Jones has ten coins in his pocket”, and q to “The man who will get the job has ten coins in his pocket.” Even if the above claim is correct and q is deduced from p, Smith is not entitled to claim justification, and therefore nor claim knowledge.

This is because q’s locality is much more broad than p’s.  By accepting q, Smith should also accept the possibility that another object other than Jones could be part of the set that q describes. While p is true if and only if Jones has ten coins in his pocket and gets the job, q is true if any person, who could or could not be Jones, has ten coins in his pocket and gets the job. On these grounds, q weakens Smith’s argument because of its broader locality, and p cannot stand on its own to form a Gettier case as then Smith’s claim would just be a justified, on Gettier’s terms, belief that turned out to be false. Similarly, in the “sheep-in-the-field” case (Chisholm, 1966), the proposition q that “That animal in the field is a sheep” has less locality than the proposition p that “There is a sheep in the field”. Even if q is deduced from p, S has no justified reason in believing q, as p and q do not share the same degree of locality. S’s evidence for justification is just inconclusive (Lehrer, 2000). Therefore, Gettier fails to recognize that changing the locality a proposition can affect the strength of the argument. 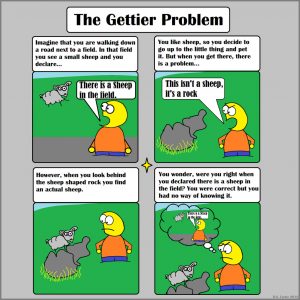 There have been criticisms, on the other hand, that demanding infallible and indefeasible reasoning is a radically skeptic demand and it is impossible to live with (Williams, 2001) as well as that rejecting the notion that it’s possible for a person to be justified in believing a false proposition means that nobody is ever justified in believing anything (Feldman, 2003). However, it can be claimed that knowledge is not about practicality. Knowledge does not require a practical world in order to exist and the two do not go hand in hand. Knowledge is also not about impossibility. Williams’ (2001) claim that it is impossible to establish a “God’s-eye view” and have access to an absolutely true informational state does not imply that knowledge cannot exist in a radical form.