Fearing the fearful; a Christian outlook on the refugee crisis 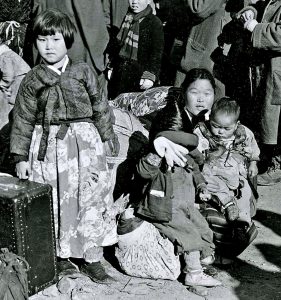 The world today is seeing the largest refugee crisis since the Second World War. The very poorest of humanity are being forced to leave their country due to tragic conflicts within their home countries. They have nothing to support their future, save the distant hope that awaits them in the traditionally Christian west. So why do countries like the UK and the USA turn away these people?

The biblical attitude to refugees is not impossible to determine. Jesus frequently broke down social and racial barriers to love those who no-one else would (the Syrophoenician woman’s daughter, the Samaritan woman by the well, and the Parable of the Good Samaritan to name a few). Paul picks up the racial equality theme for God and Christians when he wrote “there is neither Greek nor Jew” (Galatians 3:28).

So, if Christians cannot be racist biblically, is it because the majority of these refugees are Muslim? Islam was yet to establish itself at the time of Jesus’ ministry and the writing of the New Testament, so surely Jesus would have spoken out against this religion? But not once did Jesus actively speak out against the Roman gods (to whom sacrifices, including some human sacrifices, were made) in the society in which he lived. Why? Maybe because his example of truly “loving your neighbour” was more important (Mark 12:31). He actively involved himself in discussing matters with the centurion (Matthew 5:8-13), and the first Gentile believer was that of a centurion also (Mark 15:39).

So why is the traditionally Christian west so fervently opposed to the idea of accepting those that need it most? David Cameron and others might call the UK a Christian country, but with 5% of the population having membership to a church in 2015, this seems a little far fetched. It seems then that it comes down to the identity that people have of themselves because of the country in which they live. So what is the controlling belief that shapes the majority of British thought?

Well let’s think about which demographic has the majority of these views, according to recent election results. 25% of people 18-24 voted for Brexit, compared to 61% of 65+. Similarly, 37% of 18-24s voted for Donald Trump, compared to 53% of 65+. Yes, one was an election for the President of a nation and the other a referendum concerning Britain’s foreign policy. Granted, there are many other socio-economic features to both campaigns; yet, behind both campaigns is the promise to limit immigration, including that of refugees. So, why do those born before 1950 believe that refugees in their country is such a bad idea?

I believe the answer is this: a belief in or a desire for national superiority.

Rationing in the UK following World War II ended in 1954. The wars remained central to people’s identity for many years later, with people who were born in this period very patriotic about the struggle within the war years. The war had taught British people that Britain was the strongest nation on earth (certainly this was the belief up to the end of the second world war) with a stiff upper lip and a need to carry on through adversity. Then came the superiority of the USA and USSR in the Cold War.The British media tried to portray British strength on the international stage, both with the Americans but also separately, most notably in the Falklands War. There has never been any doubt in the British mind that even through this period, there was no greater nation on the planet.

So, those who grew up in these times have a view that the United Kingdom is a special nation. The things that set this country apart from others in the West (such as the NHS) are seen as unique. Therefore, when refugees seek entry to Britain, older generations believe that they pose a threat to the unique British way. This has led to worry about islamic teachings in schools in Birmingham and London; people are very strongly expected to conform to traditional British culture and to intertwine their own culture with it at the expense of their own.

There aren’t many who would see the dreadful images of refugees drowning in their desperate plight to cross the Mediterranean and genuinely hate them. In fact the root of the issue lies with our perception of their native islamic culture. Some believe so firmly that this country should continue to be (or once again become) the greatest nation on earth, that anything that threatens its culture should be removed, regardless of how desperate the people seem.

So what can Christians do? A selfless love is key, but there must be a respect for national authorities. Therefore, practical ways of ‘loving your neighbour’ in this age of political uncertainty must seek to firstly to stand up politically for those who globally need it most, and to NGOs who work with those who are worst affected by the monstrosities in the Middle East at present. The Bible doesn’t say love your white, British, christian neighbour. It says to love your neighbour: regardless of race, religion, gender, culture, sexuality or any other discriminative category.

In the words of Archbishop Desmond Tutu: “Your ordinary acts of love and hope point to the extraordinary promise that every human life is of inestimable value.” This is what Christianity must look like in relation to refugees.