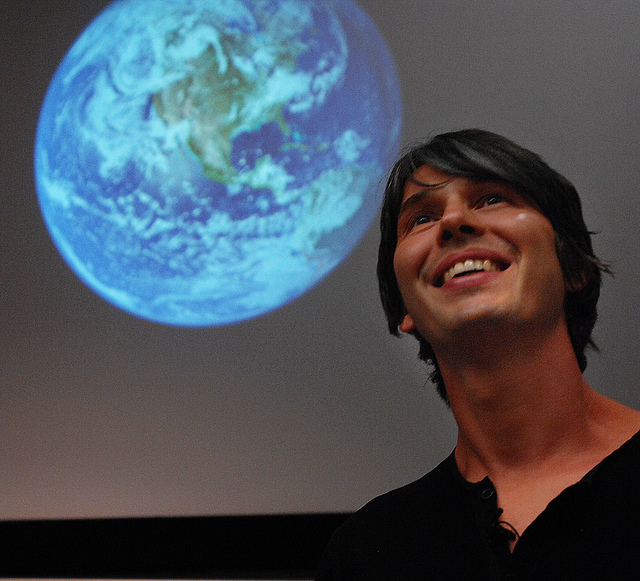 Professor Brian Cox: quite possibly the most powerful man in the Universe.

Whether you find Professor Brian Cox an awe-inspiring guide through the secrets of the Universe, or an annoying oik who keeps harping on about bamboozling and silly-sounding concepts like “imaginary time” and “gravity”, one thing is as clear as basic arithmetic: you just can’t get away from the guy.

Try it. Turn off the TV, and there’ll he be on the radio explaining the Higgs boson particle to Richard Bacon. Turn off the radio, and there he’ll be on TV, explaining the Higgs boson particle to the rest of us dim-witted non-scientists. Turn off both radio and the TV, and there he’ll be in the window of Waterstones, contemplating a purple cosmos on the cover of a magnificently photographed, magnificently priced book. At one point over the Christmas schedule, he was on at least two BBC channels at the same time. Soon there won’t be a programme left that he won’t have done; the Proms, Masterchef (which seems to go on for longer than the current age of the Universe), Dancing on Ice, even Midsomer Murders – the latter having been so utterly ridiculous for so long that, if they did an episode set in outer space, no-one would really think much of it.

Even if you were to climb Everest, ascend into the darkest bowels of the ocean, or plunge into an oozing volcano, still there he would be, having persuaded his producers that he absolutely has to go to Everest on licence-payers’ money, as it’s the only possible way to demonstrate what rock is. And he does all these media appearances and takes all these exotic holidays whilst, presumably, doing some science at some point. Now that he is more ubiquitous than the sky, perhaps it is time physicists put aside for one moment their quest for the Grand Unified Theory and instead address the more immediate question: how does he do it?

He may have cloned himself; somewhere in a dingy Manchester headquarters, the original Professor Brian Cox is running a vast network of clones, sending one off to do the aforementioned Richard Bacon interview, another to appear as one of Harry Hill’s running gags, a third to make him a cup of tea, and a fourth to fetch a biscuit. If this is a disturbing and ethically-troubling vision, comfort may be sought in that it is also highly unlikely. Professor Cox likes order, control, the simplest explanation possible – and a network of clones is anything but simple. They could very quickly run riot, and the deception would be near-impossible to keep from being uncovered. There is no way, for example, to guarantee that one day two clones won’t walk into the same newsagents to buy a copy of The Economist at the exact same time, blowing the whole operation in an instant. Besides, cloning is the twisted work of a biologist, not a physicist. What would a physicist do if he wanted to be in more than one place at the same time?

To me, it is perfectly obvious what has happened: Professor Brian Cox has found a way to move faster than the speed of light itself. Ridiculous though this sounds, it does provide an explanation for all the observable phenomena, including why a supposedly 44-year-old particle physics Professor looks barely old enough to be taking his GCSEs . He may even be moving at infinite speed, which presumably would place him absolutely everywhere in the same instant. Such an experience is surely beyond the human capacity for knowledge, and I fear he may very soon go mad with his own power. And that’s not even to touch upon the sort of Messiah complex that standing around on a mountain preaching the truth can engender. This man must be stopped before he becomes too all-powerful to do anything about. That is, if we aren’t already too late.