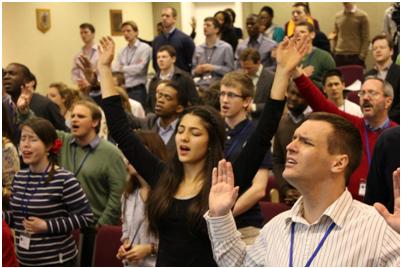 August 2011. Somerset. Among eleven thousand young Christians, I was talking with a girl who had come from Lithuania, I think. She told me of her desperation for God to come into her life again. I didn’t know how to help apart from pray and then she asked me if I’d like to go to the market place. In the market place there were some charity stands with various charity’s interns looking enthusiastic to tell anyone, everyone, about their charity. I started talking to someone from ‘Christian Concern’ – I’d never heard of them. The very articulate and intelligent woman told me about some legal cases where Christians had been marginalised in their workplace because of their Christian faith. Then she told me of a conference called ‘Wilberforce Academy’ which was for young professionals and students like me. I realised that this was the point where I could either become personally involved in the cause or not – normally my cue to politely realise the time and run away. But something kept me listening and I am not embarrassed to say that I believe it was God.

December 2011. London. I walked out of Starbucks, rushed back to get my social psychology reading that I had forgotten, and then made my way to the Christian Concern headquarters near the famous Harley street. I kept saying “this is another world.” There were two other people being interviewed and I was interviewed by three lawyers. We started the interview with a prayer, why not. I already had a headache but this was the deepest interview I had ever done: how would a Christian society be different to a Muslim or other faith society? What do I think are the main challenges to our society? What do I think are the main challenges to Christians in this society? I saw some confusion on their faces when I tried to describe my picture of society as a body with many functions but all working as one. It made sense to me anyway. The questions about myself were easier although I have tried to repress the memory of myself demonstrating the Geordie accent..

March 2012. Oxford. Despite my reasons not to go, somehow I was arriving at the Wilberforce Academy in the beautiful historic Oxford city. Greeting me were some gay activists with banners and boards saying ‘out with this sort of thing’ and ‘homophobes’. To my knowledge I hadn’t had to sign anything to say that I hate homosexuals in order to be at the conference. So I had a lot of anticipation about the week and was keeping my mind open. The barrister Andrea Williams gave a welcoming talk to give us an idea about what to expect from the week and encouraged us to pray that the activists know the love God has for them.

Each morning was a 7.30am start – ouch! Not much of a holiday. The week was a lesson in life. It was broad and rich in information. We were given lectures concerning many areas of life from bioethics, abortion and euthanasia to equality law, Shariah law, and theology. I realised that I was so ignorant about so many things but this week brought me up to date. I felt like I had learnt more than I had in my degree. Considering the recent proposal to redefine marriage, I was challenged to question what was the purpose of marriage? Did I agree with an ‘anything goes’ law? Should law follow personal choice or should personal choice be regulated by law?

Some things shocked me, the statistics about abortions…You may have read the newspaper headline: 1 in 5 abortion clinics breaks the law. At present, for an abortion to occur, two doctors must sign a form to agree that there is substantial risk to the child’s or mother’s physical or mental health. However, doctors break the law by pre-signing forms meaning that they do not have to have met the woman thinking about having an abortion. This seems anti-conscience since, whether you are pro-life like myself or pro-abortion, you would realise that each case is different and should be well considered. For example, a woman who has been raped has a different situation in some respects to a woman who carries a child with a cleft palate or the child is of a sex they don’t desire. I was surprised to hear recent cases involving the latter two reasons as grounds for an abortion and the statistic that one in three women in the UK have an abortion. I can’t comprehend the psychological impact that must entail – there is no happy answer.

I could go into much more detail about, for example, the 2,800 honour killings that occur in the UK every year, or the nurse Shirley Chaplain whose liberty to wear a Christian cross necklace while on a work shift is her liberty to resign. But, what I found so remarkable about the week was the people I met. There were around ninety people from various places such as America, Singapore, Croatia, Nigeria (an eye-opening opportunity to hear about the persecution of Christians in Northern Nigeria that the media doesn’t seem to be reporting). There were many students and world experts in their fields. Some people came to give speeches. Baroness Cox gave a welcoming speech to a formal dinner (like Durham but sadly no gowns) and the business man next to me, who tithes many £1000s a year, informed me that the Baroness co-founded the charity Christian Solidarity Worldwide that my sister works for. There were also some MPs, including Nadine Dorries, who has been in the public’s eye for proposing a change of the abortion limit from 23 weeks to 20 weeks. A seemingly unpopular challenge to pursue but courage is the flower of conviction and she follows her conviction.

There were people from all walks of life. I became friends with some individuals there who had previously had a life of drug addiction and gang violence. But we all shared in the fact that we had been freed from our past because of Jesus Christ and now I was talking to changed people. Their life ambition is to be a faithful servant of the Holy Trinity God. I consider them as brothers and sisters

It was a life-changing experience. I can’t do my experience justice in any word limit. However, I can assure you that I was not brain washed by these ‘fundamental extremists’. In contrast, I was blown away by their humility, generosity and sincere love they showed to everyone they met. It is a shame that people so compassionate in what they believe have been so misrepresented in the media and in general discussion. I realised that everyone has a viewpoint and secularism has its own viewpoint as well as the Christian faith. Everyone can’t be pleased.