December is here. But do we still look forward to Christmas for the right reasons? 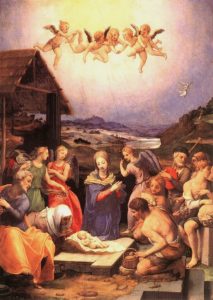 Worship of the Shepherds, Bronzino.

When December comes around, two things will be heard without fail. The first is the cacophony of different Christmas songs fusing together as you rush around the local charity shops, trying to purchase last minute presents. The second is more negative: the standard grumpy remark that Christmas has lost its meaning. And although no one likes to admit it, we can all see their point. Christmas adverts are coming out earlier every year, with a plethora of companies trying to outdo one another, as more and more famous singers such as Tom Odell and Lily Allen perform the backing tracks and more elaborate, bizarre storylines appear. It can seem that Christmas, from early November until the day itself, has become less of a celebration and more a cog in a large corporate machine, building on the red Santa look brought about by Coca Cola’s Christmas adverts. Indeed even the idea of spending time with one’s family has become distorted in to a mad panic to find the ideal gift, rather than valuing one another’s presence. It would seem that particularly the religious origins of Christmas have been well and truly submerged in the deluge of commercialism which adorns this time of year.

Beyond the traditional value associated to Christmas: the sentiments of togetherness and merriness, we must look back to the religious origins to question whether or not the true meaning of Christmas has been lost. Christmas is a religious festival created to commemorate the birth of Jesus Christ. ‘Christmas’ is an abbreviated form of ‘The Mass of Christ’, Mass being a service where Christians actively and collectively embrace the self-sacrifice of Jesus. Going to mass would not even be part of many people’s Christmas period in the modern day. Many believers would adamantly suggest that Christmas is worthless once you stray from the religious meaning. Indeed what do you cling to about this Holiday if you have no family to connect with? What is it about Christmas that can light up the eyes of someone who has very little in life? This is why it could be argued that we must not forget religion as we enter the final month of 2016, otherwise we are clinging to a concept with little to no substance. The very fact that the festive period is ,for many, a time of intense stress, demonstrates that we have lost our way to a frightful extent.

However you can point out positive aspects of Christmas beyond this commercialism, without turning to religion. It is fair to say that when the day itself arrives, glimpses of true Christmas magic shine through. Yes, we may have had to sit through weeks of early Christmas songs and lovesick penguins on our screens, but the contented looks exchanged across the dinner table as for a rare moment you are united with family. Looking back to my school days, the chapel would often be silent as many found the hymns unimportant. But come December, the whole school erupted into voice as one in a way that it otherwise would not.This may not be joy evoked from the religious power of the words in, ‘O Come All Ye Faithful,’ but simply a nostalgic fondness for carol-singing, however does this not have value in itself? The meaning may have been changed over time, but it does not mean that it is now without value. In a world where we wake up each morning to increasingly depressing news, perhaps we need festivity to brighten our lives and this is as credible a reason to celebrate Christmas as a religious motive.

Therefore whilst our first thought on Christmas Eve may be the last of our advent chocolates as opposed to the impending birth of baby Jesus, we ought to appreciate this as the mark of a diverse world celebrating a national holiday in a multitude of different ways. There will always be the grandparents who moan that it, ‘wasn’t like this in their day,’ but of course it wasn’t; society is constantly progressing. We shouldn’t always look backwards but instead take a subjective approach and appreciate that Christmas can mean a multitude of things to a multitude of people- there is no right way to celebrate.