Can We Justify War? 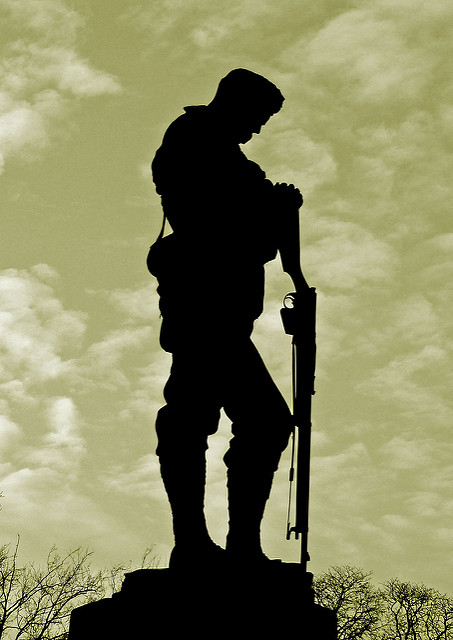 The influence of violence and bloodshed across the ages of humanity is profound and indelible. Modern society is forged from the blood and sweat of countless men, of innumerable lives in the continual competition for dominance. Even in the seemingly peaceful and progressive image with which the West perceives itself, the atrocities of the World Wars still exist in living memory, the nuclear stalemate of the Cold War is still recalled with horror, and the most recent wars against terrorism in the Middle East remain a very real threat today. As civilised, rational human beings, can we ever justify war? With the ability to reason, to compromise and understand, should disputes ever be allowed to escalate towards conflict and death? I will explain some of my thinking on this matter in this article.

It is often thought that within every human is the capacity for violence, for aggression and retaliation. Freud seminally identified this as ‘thanatos’, the self-destructive death-drive, which, in opposition to ‘eros’, manifests in the world through violence and destruction. This is to say that whilst humans have the capacity to love, prosper and propagate (‘eros’), they can equally desire to kill, destroy and ruin (‘thanatos’). This ‘death-drive’, ingrained into our very psyche, is, in many respects, a natural stimulus for war. As humans we are born to fight and compete on both a domestic and national level in order to endure and thrive: our primal ancestry necessitates that there is a beast within us all, which lingers at the edges of our rational consciousness.

To illustrate, hearing the great words of Shakespeare’s Henry V will invariably rouse an audience and rally them for war, despite being self-consciously performed in the confines of the ‘wooden O’ (I. Prologue. 13) of a theatre:

‘But when the blast of war blows in our ears,

Then imitate the action of the tiger:

Stiffen the sinews, conjure up the blood,

Such language, such passion, evokes the animal within us all. Perhaps rather than ‘disguise’ (8) the ‘modest stillness and humility’ (4) of our natures, as Henry suggests, he would rather that we yield to our animal selves, the ‘thanatos’ within each of us. Henry V exhibits the ease with which man’s blood can run hot with the thrill of battle, and that war is only able to exist because it has a natural potential in humanity. I believe, therefore, that we naturally want to fight, that war is an inevitable manifestation of human nature. This may sound like an excuse for humanity when we know that co-operation and negotiation will always result in a less costly outcome than conflict, but the point remains: our natural desires often overcome our rational thinking. As a result, I would suggest that to progress – as Freud recognised – we must suppress our natural selves and embrace our rationality, our means of negotiation; war is only a means of regression in modern society.

Despite being aware of this, the question remains how does war continue to exist today? How can a self-identified modern and progressive society justify military action? To a large degree, ideology, whether religious or secular, gives such meaning to war. Religion, once labelled the ‘opium of the masses’ by Karl Marx, is an attractive justification. Meaning derived from the supernal needs little explanation, just as the soldiers on both sides of the First World War, mutually drawing morale from the belief that God was on their side, ironically exhibit. Similarly, Nazism, though not a religious ideology, was still able to not only give meaning to another World War for the Germans, but also mass genocide, through its invasive and pervasive doctrine. Thus, I would suggest, ideology rationally permits and gives meaning to those natural, irrational desires of ‘thanatos’. So attractive is the potential for meaning in ideology that potentates for centuries have been able to indoctrinate society and bend them to their will. As humans we desire meaning; the existence of that meaning, however tenuous, can lead a man to war.

In a truly advanced society, in which rationality and morality reign over antagonism and hostility, war would remain a shameful memory of the past. Thomas More’s idealistic Utopian society – a unified civilisation where each man strives for the betterment of the whole society – avoided war at all costs. Although appreciating the need to fight when conflict was instigated, the Utopians preferred negotiation and compromise. They were prepared for foreign antagonists who would resort to conflict – perhaps understanding that humans are naturally liable to make such decisions – but they pursued with far greater determination the betterment of all, irrespective of the few. More understood human nature and the need to overcome it five hundred years ago; the continuation and escalation of war since then is, arguably, testament to the ability for ‘thanatos’ in humanity to eclipse our unique rationality.

This may seem a particularly simple argument, but it is simply difficult to argue that war is justified today when we have the rational means of negotiation. Perhaps only in the ideal Utopian vision of war, in which they defend themselves from others, and in no way incite war, can militant action be truly justified. However, in most other instances, war is the result of xenophobic nationalism and hostility. Capitalism remains one of the most widespread forms of government because it allows individuals to look after their own regardless of others. As with other ideologies, it gives meaning to war as the defence of ‘capitalist freedom’. In light of this, I don’t think we will ever reach a point where there will be no need for military forces – for instance David Cameron’s desire to renew the Trident nuclear deterrent programme, costing £25 billion, whilst Jeremy Corbyn would rather disarm the submarines – for there will always be selfishness and ‘thanatos’ in humanity. Therefore, despite our incredibly advanced understanding of ourselves, we are still unable to rationally overcome human nature. We continue to be intolerant to diversity, to shut our borders to others, as evidenced by the recent ‘Brexit’ vote and the shockingly rapid rise in support for Donald Trump. We have the capacity and understanding to progress, but we remain resolutely static, prone to regression, with the Utopian dream remaining just that, a dream.