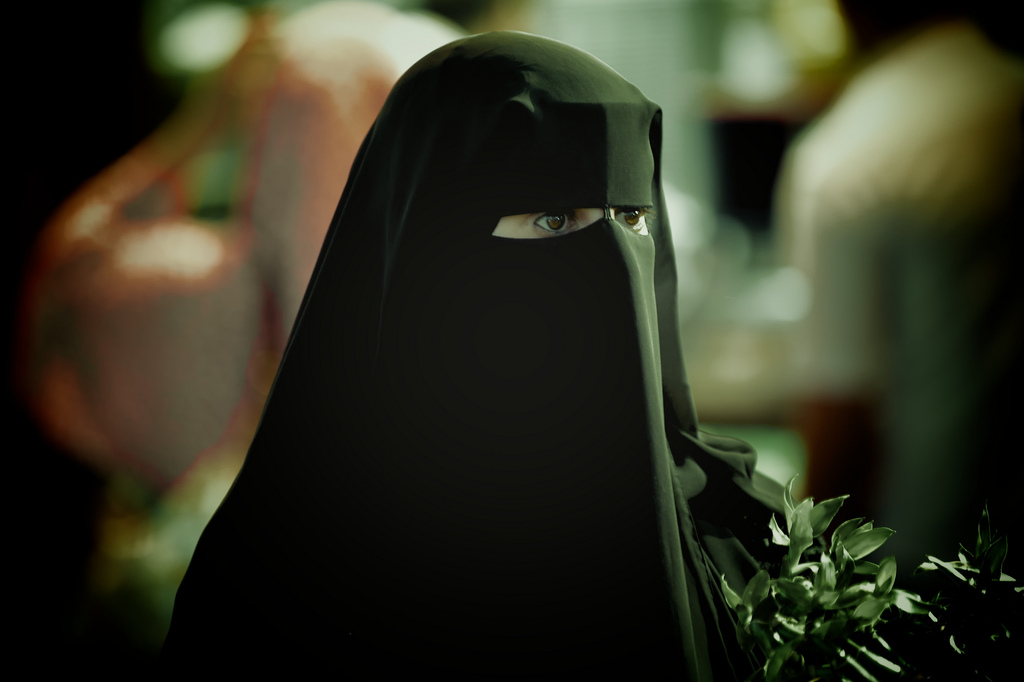 A symbol of modesty, oppression, fear or liberty?

“Cameron Unveils Burkha Ban” would be a sensational newspaper headline. Those accustomed to the more multicultural parts of 21st Century Britain would be shocked and incredulous in the face of such a decision by our government; yet according to a 2011 YouGov poll, a whopping 66% of our population would warmly welcome such a motion. The question of whether to ban face-covering Muslim veils has been asked by a number of European governments in the past few years, with some answering in the affirmative, just like our apparent majority; since April 11th 2011, any woman wearing the veil four miles southwest of Dover (that’s Calais to any dyslexic-geographers among us) now faces a fine of €150 (£130)…and the rosy prospect of lessons in French citizenship.

The burkha and niqab are among a variety of headdresses worn by Muslim women that cover the entire face except for a slit or hole for the eyes, and although this is done in accordance with hijab, the principle of dressing modestly, the veil (the term I shall be using for simplicity’s sake) is seen by many as an abhorrent symbol of oppression against the unfortunate women who are forced to wear it; ‘modesty’ is merely subjugation in disguise. The question of whether women wear a veil out of choice is definitely situational; one cannot deny the veil its connotations with oppression in some situations, but can in many.

It is certainly not a religious obligation; the vast majority of Muslims in this country obviously do not cover their faces in public. The Qur’an merely instructs men and women to dress and behave modestly in society (24:31). If that instruction is understood by some as a command to cover the face, then to ban the veil is to infringe upon their interpretation, assuming command over their personal religious and cultural beliefs.

I imagine that many people have no qualms with that infringement, however. Preventing the subjugation of women serves the ‘greater good’. But the cosmetic industry makes its billions from pampering the insecurities generated by the objectification of women in the Western world – surely that too is a form of oppression in a certain light. But to ban cosmetics would do absolutely nothing against the objectification of women. So too would banning the veil do little for any oppression there may be; it would only make these spiteful men imprison their wives in their homes.

This perceived subjugation of women is hardly specific to Islam among religions on British shores. Christianity in this country sometimes has a tendency to take St. Paul a little too literally and not allow women a role of leadership within the church. That is crystal clear subjugation and yet those particular churches are not shut down in this war against oppression. No, it is their religious and personal liberty to perceive gender differences as they choose. But the wearing of a veil goes too far, so 66% think, so that liberty is to be suspended.

The real reason behind the results of that poll is surely islamophobia, an irrational fear of Muslim extremists which is triggered by the sight of somebody wearing a veil. It makes us uncomfortable, not being able to see underneath that veil. We are all terribly afraid; that is nothing short of pathetic. Obviously a face-covering veil does not exactly do a CCTV system any favours, and so there are some places and circumstances where a ban makes a lot of sense. But a wholesale ban as a result of a decade of learning to fear Islam (due to the media and press which disguise the real reason as a righteous crusade against the oppression of women) is nothing short of a hollow sham. At least be honest about the real reason – that fear that some feel when they see somebody wearing a veil board a train. Irrational fear does not constitute sufficient reason to suspend religious liberties, it only serves to illuminate the paranoia that threatens the tolerance and plurality of our nation; if anybody could actually remind me of an instance of a criminal running rampage under the protection of a veil – a story which would undoubtedly be publicised to the highest level, the Daily Mail aside – I would happily eat one.

Ultimately, I am firmly on the side of tolerance. Interpreting a loose verse in the Qur’an as a command to cover every inch of flesh, head to toe, seems extreme to say the least; it’s modesty taken a bit too far. But to actually outlaw such an interpretation is a huge suspension of personal liberty, which seems far more ‘un-British’ than the object of the ban itself! The individual should have the right to wear whatever he or she chooses. We tolerate all sorts of behaviour because ours is a country that embraces the pluralism of a post-Christendom world. We do not have to respect the personal (religious or not) decisions of others, but we are to tolerate them at the very least. I do not respect the opinion of the 66% of advocate the ban, but I certainly tolerate it. It’s their free choice.

To fight ‘oppression’ by banning an item of clothing is, if nothing else, really rather silly.