A Brief Tribute to Bill Hicks 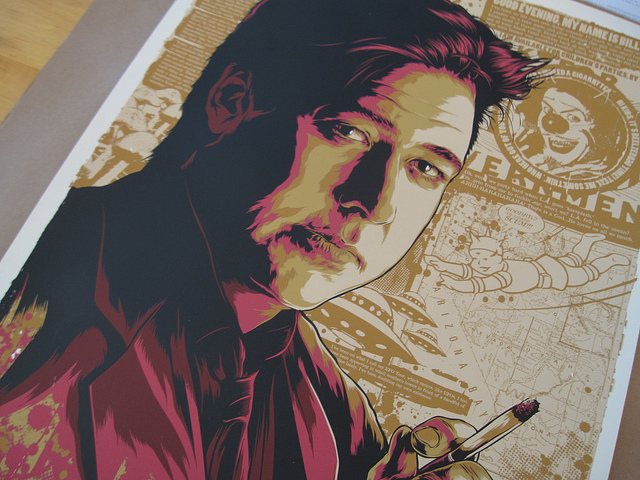 The comedian Bill Hicks would have been 51 today. Had he still been alive, it is possible that he would have been involved in a career-ruining scandal by now, or no longer have had anything socially relevant to say today, or be barely remembered as an obscure also-ran, or have become an obscene self-parody, or even sold out his own principles and appeared in a commercial. Somehow, I sincerely doubt all these (especially the last one). It is more likely we would have gotten his thoughts on those subjects that we never will get to hear him talk about: George Bush Jr. and Tony Blair, 9/11 and Osama Bin Laden, Barack Obama, X Factor and American Idol, Reality TV and global warming, to suggest but a few. It is dangerous to write a tribute to him; the temptation to romanticise who he was and what he did, given his early death, is great, as is the temptation to dismiss any eulogies for doing just that. However, just because Jimi Hendrix died before the star could fade, it did not mean that he couldn’t play the guitar. And, for my money, Bill Hicks really was a great comedian.

Nearly all, if not all, comedy has at its heart a contradiction, whether this is promising the audience one punch-line and delivering another, or providing a caricature that both does and does not resemble real-life simultaneously. But Bill Hicks did not build absurdity into the structure of his comedy, so much as point out the absurdities that already exist in life, whether they be in politics, sex, drugs, commercialism, war, art, religion… nevertheless there was, fundamentally, a deeper contradiction at work in his routines. For all his crudities, obscenities, vitriolic insults and seemingly insensitive attacks, whether they be aimed at entire regimes or just crap musicians, he was ultimately a philanthropist.

I believe that he believed that human beings, basically, are good, that the world is supposed to be a good place. If his words were shocking, they were not shocking for the sake of it, but to jolt people into recognising this fact, realising the discrepancies between what we could be if we put our minds to it, and what we really are. Bill Hicks had a brilliant mind, and he put it to the task of sharing this vision with others. I get a sense, watching his routines, that this was even more important than the comedy; it was never simply about getting a laugh. It was more honest and sincere than that. To get on stage in this post-modern, cynical age and articulate such a vision is a difficult thing to do. To do it and be as funny as Bill Hicks was doing it, is even harder. That he also managed to be post-modern and cynical, is miraculous. There have been many clever comedians, many shocking comedians, and possibly some that were straightforwardly funnier than Bill Hicks. But I cannot think of one who demonstrated the same largesse of vision.

By way of illustration, I quote words with which he often concluded his own shows. How many comedians today would say something like this as part of a comedy routine?

“The world is like a ride at an amusement park, and when you choose to go on it, you think it’s real because that’s how powerful our minds are. And the ride goes up and down and round and round; it has thrills and chills and it’s very brightly coloured and it’s very loud and it’s fun… for a while. Some people have been on the ride for a long time, and they begin to question: “Is this real, or is this just a ride?” And other people have remembered, and they come back to us, and they say, “Hey – don’t worry, don’t be afraid -EVER- because, this is just a ride.” And we… KILL those people HAHAHA! “Shut him up! We have a lot invested in this ride – SHUT HIM UP! Look at my furrows of worry! Look at my big bank account, and my family! This just HAS to be real!”… But it’s just a ride. And we always kill those good guys who try and tell us that, you ever notice that? And let the demons run amok? Jesus – murdered; Martin Luther King – murdered; Malcolm X – murdered; Gandhi – murdered; John Lennon – murdered; Reagan… wounded HAHA! But it doesn’t matter because: It’s just a ride. And we can change it anytime we want. It’s only a choice. No effort, no work, no job, no savings of money. A choice, right now, between fear and love. The eyes of fear want you to put bigger locks on your doors, buy guns, close yourself off. The eyes of love, instead, see all of us as one. Here’s what we can do to change the world, right now, to a better ride: Take all that money that we spend on weapons and defense each year and instead spend it feeding and clothing and educating the poor of the world, which it would many times over, NOT ONE HUMAN BEING EXCLUDED, and we could explore space, together, both inner and outer, forever, in peace.”