A Barcelona Roamer’s Guide to Churches 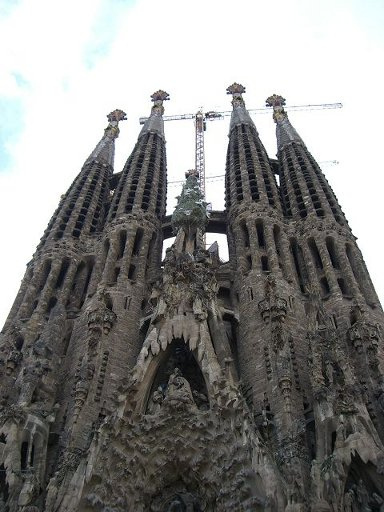 The Basilica de la Sagrada Familia: unfinished, but already arguably the most distinctive building in the world.

I recently spent a week in Barcelona, which gave me the chance to experience the Catholicism of Catalonia. Obviously, the point of the Church is that it’s more or less the same wherever you are, but each church I went into provided something very different, both from each other and from the generally less outwardly expressive sort of Catholicism that I have grown up with.

The Basilica i Temple Expiatori de la Sagrada Familia – This is the thing you most have to see if you’re ever fortunate enough to find yourself in Barcelona, and it certainly doesn’t feel like your average Church. Even as a secular experience, the sheer scale and wonder of the thing is fantastic, and in its half-finished state it already may well be the most distinctive building in the world. When finished, whenever that will be (current estimate is around 2025–2030), it will be about twice the height it currently is, and it is currently enormous. If it was built in the Old Testament, the project would be stopped by God on the grounds of sheer folly; certainly, I can’t believe they can actually build it as high as they say they will. But presumably someone, somewhere, knows what they are doing.

But for all its modern-ness and unusuality there is, I think, a supremely religious heart beating behind its construction. Certainly its architect, Gaudi (nicknamed “God’s architect”), was a devout Catholic who wanted to build a monument of devotion to dominate the city. Gaudi’s quirky architecture is famously inspired by nature, giving it its unique, distinctive look. The impression one gets of walking into the nave is that of a forest, its columns like trees jutting off at different angles. This feels innovative and almost futuristic but it is, in fact, rather close to Medieval Christian thought, which saw no bridge between the secular study of nature, and the worship of God – nature was, rather, part of revelation. It also means that the building, for all that it is over-the-top, doesn’t feel over the top. It feels genuinely organic, as if it is growing out of the ground. If you believe in God or Nature, it is hard not feel a sense of the construction being under some sort of higher guidance, and that is something truly remarkable for Gaudi to have achieved.

Barcelona Cathedral – Going into the old part of town we find an elaborate gothic façade that is nowhere near as old as it purports to be (the central spire was only completed in the early 20th Century), but is as compact and fantastically gothic as you could want inside. Whilst nowhere near as impressive or as fresh as the Sagrada Familia, it has some truly beautiful architecture adorned with some of the ugliest Church decoration you will ever see. Here is where the stereotypical Mediterranean Catholicism shines through, literally: no statue is too painted, no tabernacle too ornately gilded, no icon too gruesome. There’s alcoves all along the inside, and one of these over-egged puddings inside every one. The cloisters, however, are supremely cool, highly stylized medieval cloisters that caricature the narrow, pointed arches of gothic architecture. There are also trees in the middle, with a fountain and, bizarrely, a live flock of geese.

The most offensive item is the tabernacle on display in a room just off from the cloisters, which looks a bit like every room in Versailles melted down into the helmet worn by Sauron at the start of The Lord of Rings. A crucified Palestinian who preached giving all you have to the poor, somehow got translated as “build the biggest, most ornate, fabulously gold thing you can to house me, your Lord.” Something has gone very wrong somewhere.

Basilica di Santa Maria del Mar – Not far from the Cathedral, this is quite similar on the inside, but it’s somehow airier, calmer, more leisurely, a place where I just wanted to sit and zone-out and feel calm. It’s not pointed and crammed like churches; it’s squarer in shape, which creates a breathtaking openness and an atmosphere all of its own.

It too has icons of devotion in its many alcoves, many of them gruesome, but they somehow feel more moving and sincere, even if the statues themselves are not particularly pleasing from an aesthetic point-of-view. They represent different Saints, and each Saint has candles of devotion lit to them, which effectively acts as a tally for determining the most popular. Unsurprisingly, the Crucified Christ and the Virgin Mary are way out in front. Poor St. Ignatius of Loyola had only the one candle when I was there, no doubt lit by a loyal Jesuit. The Sagrada is an amazing place to see, the Cathedral is a good place to compare, but the Basilica of Santa Maria del Mar is like peace in a big stone box.

So there you have it, three rather different experiences of Catholic-inspired architecture, in a city that makes difference one of its defining characteristics.