Whenyoung are an Indie-rock trio from Limerick that fit neatly into the Irish Indie cannon. They are stylish and cool and their music packs one hell of a punch. Having only been on the music scene for a few short years, Whenyoung have successfully realised a number of popular records such as the witty song ‘Actor’ and most recently the throwback indie song ‘Heaven on Earth’ which showcases interesting guitar riffs.   The up and coming band has already toured with big names such as Superfood, the Vaccines and Nick Cave and the Bad Seeds, and have just finished a hit tour with Peace. I was given the privilege of interviewing the band on the 24th of May in Birmingham before their final show supporting Peace.

When I met Whenyoung, they were chatting amongst each other in the 02 Academy’s backstage smoking area. The band were dressed in typical trendy, artistry attire. Lead singer and bass player Aoife Power was wearing an old fashioned grey pantsuit and guitarist Niall Burns was draped in a weathered green jacket with his gold earring shinning in the warm evening sun. There’s no denying it: these guys are cool. As I approached the trio, I was bricking it. After being introduced by their tour manager, I was greeted with warmth and smiles and was quickly made to feel comfortable by the down to earth band.  I commenced the interview, but it quickly became more of a friendly conversation.  The short chat covered a range of topics such as the band’s love of French cinema, with Aoife expressing an interest in the works of Goddard, a clearly influential figure on the band’s aesthetic.  Drummer Andrew Floors also mentioned his motorcycling hobby, which should come as no surprise considering his rock’n’roll appearance of long hair and leather trousers.  I questioned the band on the clear influence of Irish popular music on their sound, to which the knowledgeable guitarist Niall listed Enya, Whipping Boy, Girl Band and others as key influential Irish artists. The guys professed to me that their favourite city to gig in is Sheffield and told me of Whenyoung’s future plans, which includes playing a sleuth of festivals this summer and even a headline tour! They are playing in Newcastle on the 28th of September, so I highly recommend taking the quick train from Durham to go and check them out: you won’t be disappointed. The band was laid back and collected, puffing away on their cigarettes, despite being mere minutes away from playing in front of a large lively audience, all eager to experience the final homing show of the popular band Peace. I left the band to relax before their big show and got ready to enjoy the event. All in all, I found the trio to be friendly, palatable and clearly passionate about their music. 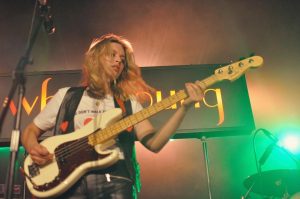 Singer and bass player Aoifie during the show

The show was a great success. They enthusiastically bounced onto the set in a new on-stage attire and Aoife announced to all ‘We’re from Limerick’ and then jumped straight into ‘Actor’. The tune is energetic, and its witty lyrics are sung through a heavy Irish accent with extreme personality. It has quickly become a personal favourite tune of mine.  Next, the audience was introduced to an unreleased track named ‘The Others’ which was explained to be about the 2017 Grenfell tower disaster. The audience cheered in response to the bands politically aware song and the catchy chorus and backing singing was a pleasure to listen too. The band played the jangle-pop song ‘Pretty Pure’ with a driving drum beat provided by boiler suit wearing drummer Andrew Floor. At one point during the show the stage was invaded by the members of Peace, who jumped around and provided backing for the Irish trio.  The audience were pleased with the band and so was I. Its rare that the support band outshine the headliner, but in this case, I believe Whenyoung did just that. I thought they held the stage well and their guitar and bass filled songs were inoffensive and conductive to a solid time.

Thanks to Whenyoung and tour manager Dan for giving me the opportunity to conduct the interview and enjoy a great show.  Whenyoung have released a number of songs on Spotify and you can check out their Facebook page here. They are due to commence a headline tour this September also.