The Start of Something Big? 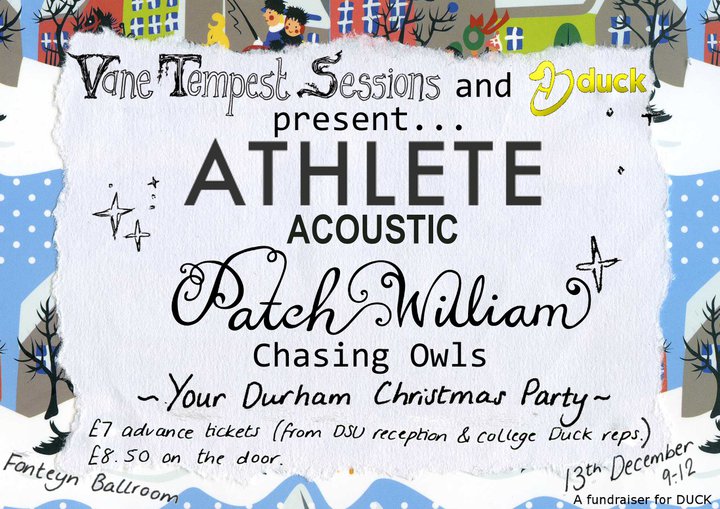 The DSU played host to a festive feast of music

The briefly renowned Athlete are one of numerous bands with the unfortunate mantle of falling from grace as fast as they rose to it. A number one album and Ivor Novello award in 2005 beckoned towards big things, following their Mercury Music prize winning debut offering, “Vehicles and Animals” 3 years previously. However, despite achieving two top 20 hits, Athlete have yet to repeat those highs again, with a string of more recent releases falling outside the top 40 altogether. It would be harsh to call them a one-hit wonder, with various singles being featured on well known compilation discs and having sold two platinum albums, but their best selling hit, “Wires”, a heartfelt and emotional dedication to lead singer Joel Pott’s prematurely born daughter and the song which won them the Novello award, is as much as many will remember of their brief stint in the limelight.

That said, the band have recently embarked on a headline tour of O2 Academies around the UK to promote their latest album, “The Singles”, of which there are numerous, regardless of chart acclaim. With that in mind, the idea of them playing at Durham Students’ Union may have seemed somewhat out of place. But thanks to the tireless efforts of Jake Wanstall and the “Vane Tempest” team, names such as these may soon grow to take a more regular appearance in Durham.

A lack of professional live music has been a familiar problem in Durham, but one few have successfully tackled, something not unnoticed by Wanstall. Recently appointed EWO officer at the DSU, he immediately pinpointed the Vane Tempest room as an ideal live setting, and with the help of an artistically minded friend, the Vane Tempest Sessions was soon born. “From the outset, this was never a money-making venture,” says Jake. “The prime objective was always to showcase quality bands, which we’re able to do by putting all of our profits from those who come back into the line-ups and the sound equipment.”

Wanstall cites “being dragged” to a “crappy little pub” to see a then unknown band called Mumford and Sons as an inspiration for creating the Vane Tempest Sessions. “Some of the bands we’ve had, a year down the line, will have much bigger gigs on their calendar, but that’s the idea.” One such band to feature, Dry the River, have already been showcased this year at Glastonbury’s BBC Introducing tent, a sure sign of the levels the Sessions are already.

For this end of term gig, the largest of the Sessions so far, the Vane Tempest room was overlooked for the more spacious Fonteyn Ballroom, and filled with a capacity 700 crowd. Christmas-themed decoration adorned the front of the stage and walls, the Union dressing in its best in anticipation of what was to follow. Edinburgh indie-folk offering Chasing Owls, already nominated for an Ivor Novello award in 2010, opened the evening with a catchy, light blend which in many ways seemed familiar, but at the same time refreshingly original, and perfect for the setting. There are audible folk influences from Mumford & Sons and Belle & Sebastian to the band, but with an indie-edge that sets them apart from both genres. For a band with as yet remote following, their audience interaction was very good, the receptive crowd joining in with the ever-catchy “Hunter”. With their numerous memorable writings and consistently tight live performance, it’s no surprise Chasing Owls are tipped for bigger things.

Patch William, the main support, had a tough act to follow and entered the stage looking something akin to a Libertines tribute-act, sporting “don’t look back into the sun”-esque military red jackets and the customary skinny jean look from Topman’s finest. They opened with a dull, monotone tune with minimal tune of any sort, a strange choice considering how their set picked up from the moment it finished, and after immediately launching into an Elvis-style rock’n’roll second effort, they never looked back. From the start, they delivered a more conventional indie sound to Chasing Owls, but oddly with a near equal measure of inherently catchy songs to those which went nowhere and seemed to force themselves together, rather than flow. “Lines of Jealousy” signalled the highlight of their set, the creative juices finally flowing with a technically and artistically superb guitar solo, and perhaps enough alone to make it worthwhile looking out for them in years to come.

Athlete’s arrival warranted understandably the largest cheer thus far, although for the acoustic session only frontman Joel Pott and regular bassist Carey Willetts made an appearance. Opening with Superhuman Touch, one of the many from the night that seemed familiar without being clearly recognisable, the number of “die-hards” became clear as many joined in with a song that never reached higher than 71. Despite missing half the band, the line-up worked well, Pott remained on guitar for the entirety of the set, with Willetts interchanging between guitar, keyboard and tambourine. Pott continued his perpetual good humour between any sly hecklers, and interacted with the audience regularly, to give the gig an even further intimate feel, at one point even taking requests over which song should come next. The room was his oyster, and the crowd obediently stamped & clapped in time with “Wild Wolf”, which worked well and helped to include anyone unfamiliar with part of the setlist. Pott is a songwriter inspired from the heart, and both “Ghost” and “Black Swan Song” were clearly heartfelt on the night, the latter, a memoriam of his late grandfather, providing chilling harmonies that brought the best out of the band and setting. Though these couldn’t compare to “Wires”, Pott fittingly performing solo as the room joined in as one, which unsurprisingly received by far the most rapturous applause of the evening. The quality of their performance merited the encore that followed, and “Half Light”, their other top 20 song, was a fitting ending to a superb set.

Personally, and I suspect along with many others, I went to this gig with the sole intention of seeing Athlete, but left with an appreciation for two very up-and-coming bands I would otherwise have overlooked. I think the latter part of that is not dissimilar to Wanstall’s vision for the Vane Tempest Sessions. As a concept of showcasing bands on the cusp of success it appears a hugely attractive idea, and on all the evidence so far, delivers on it. And any plans for more Mercury Award winners to headline? “I’m confident there’s something in the pipeline.” Watch this space.