The Sound and the Fury 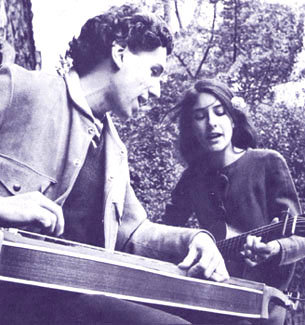 For a brief period in the mid-1960s folk music in the United States stood at the dual forefronts of popular taste and political dissent. Dominated by Pete Seeger, Joan Baez and Bob Dylan, the folk revival unwaveringly tackled the issues of civil rights, nuclear disarmament and, of course, the bête noire of sixties’ activists – the war in Vietnam. Through assorted techniques and with varying success, these artists harnessed their frustration with the failings of contemporary society to leave a distinct legacy – the manifestation of anger through the medium of song.

Although Seeger, Baez and Dylan were the folk movement’s figureheads, there was a whole raft of followers that enjoyed less widespread appeal, including the likes of Peter LaFarge, Tom Paxton and Eric Andersen. Of these songwriters it was Paxton, with his disarming honesty and straightforward melodies, who took up the mantle of social protest most fervently. The 1964 hit “What Did You Learn in School Today?” stands as an exemplar of his uncomplicated style: a cynical song of innocence that betrays the gravity of its meaning. His antipathy towards state manipulation of the channels of education is masked by an outward buoyancy that leaves the song tending towards ditty. Yet the simplicity and repetitiveness of many of Paxton’s protest songs were often their most valuable attributes. These were songs that were intended to be sung, not merely listened to. Paxton was one of a number of singer-songwriters who contributed to magazines such as Broadside and Sing Out! that published the lyrics and musical notation of contemporary folk songs. Being straightforward and memorable were key assets in the dissemination of his political message. Nevertheless, the nursery tone of Paxton’s songs never detracted from the sincerity of his emotion, and he demonstrated an unusual willingness to tackle the establishment head on. Although the threat of being blacklisted had significantly diminished since the late fifties, his unswerving assault on the incumbent president’s dishonesty in “Lyndon Johnson Told the Nation” was far from risk-free. Paxton, though, was never subjected to the zealous red-baiting that had plagued the careers of Communist sympathisers such as Seeger and Paul Robeson. His impression on the mainstream radio channels may have been limited, but his impact at smaller venues and college campuses far outweighed his commercial achievements.

Another Broadside contributor, Patrick Sky, was equally content to confront key figures in the US administration directly. Having released successful records at the height of the folk revival in 1965, Sky’s disaffection with American politics had intensified by the turn of the decade, when he recorded the highly controversial Songs That Made America Famous. His assertion in “Under All Flags” that he’d “like to screw [Vice President] Spiro Agnew with a dildo made of brass on” is particularly conspicuous among an abundance of insults, expletives and ass-wiping. Sky’s message was clear enough, but his brutality lessened its power. Notwithstanding its distastefulness to many at the time, the record failed to merge its social consciousness with any real aesthetic merit, and its shock-factor would only ever be ephemeral. Under the weight of its own comedy the record itself became the joke, marginalized as a mere oddity that only a hardcore of fans could appreciate.

Humour, however, was by no means an insignificant tool in the armoury of the topical singer, as the often-satirical compositions of Phil Ochs testify to. As a critique of the capriciousness of Middle America, Ochs’ “Love Me, I’m A Liberal” showcases his wit and heightened sense of irony, belying a disaffection that ran deeper than in any of his contemporaries. In the more stark and sarcastic “Cops of the World“, Ochs again adopted the persona of his target in order to vehemently denounce what he perceived as his nation’s self-righteous crusade across the globe. Like Paxton, Ochs saw the benefit of repetition and catchy lyrics. It was the message that was important, not the medium through which it was delivered. The singer had his slogans just as protesters had their placards. Ochs was a self-styled reporter with a guitar, a journalist that conveyed his rage through his music, his embittered commentaries leaving little doubt as to where he stood on a vast array of social issues.

Yet regardless of the forceful clarity of Ochs and Paxton, it was the frequently ambiguous and image-laden output from Dylan’s early albums that reached the widest audience. His 1963 release “A Hard Rain’s a-Gonna Fall”, for instance, rapidly became anthemic in the campaign against nuclear weaponry in spite of its lyrical complexity. Similarly abstruse was Townes van Zandt’s 1969 “Fare Thee Well, Miss Carousel“, a metaphorical assault on the hypocrisy and machismo inherent in American foreign policy. In a whirlwind tour of draft-dodging, wartime economics and the injuries sustained by Vietnam veterans, the soldier is reduced to “a blind man with his knife in hand” and the cold detachment of government signalled by the line “the teardrop couldn’t find your eye”. It may not possess the arresting candour of the works of Sky or Paxton, but in its subtlety and poetic beauty finds a force that leans towards poignancy rather than abruptness. Having caught only the tail of the folk revival, however, van Zandt would never create anywhere close to the same impact as his predecessors of only a few years earlier. His understated storytelling and sorrowful tenderness was lost in a world being wowed by the advent of proto-punk and heavy metal, where emotion found expression through the barrage of sound rather than the nuances of voice.

Although, like Ochs and Paxton, van Zandt was unafraid to put his music at the service of an ideal, he avoided the apparently pejorative tag of “protest singer” by offsetting the political with the more personal and introspective. The two albums released by Richard Fariña and Mimi Baez, before the former’s untimely death in 1966, also reflected this seemingly dichotomous divergence in subject matter. Whereas Celebrations For A Grey Day represented a more joyous affirmation of mutual adoration, Reflections in a Crystal Wind slotted into the Greenwich Village traditions of protest and dissent. Their appearance on Pete Seeger’s short-lived TV series Rainbow Quest saw the pair perform selections from both albums, and the incongruity is easily noticeable. For all Fariña’s anti-imperialist rhetoric in the “Bold Marauder” shanty and his talk of “blind mother justice on a pile of manure” in “House Un-American Blues Activity Dream“, his political disquiet is muted by the affection and optimism of older songs such as “Pack Up Your Sorrows“. The songwriter’s anger was far from a façade, but it was tempered by a hope that would make even the most sanguine of protesters appear a pillar of resignation. For Seeger, the communication of this hope was considered essential in the maintenance of morale:

“the reason I feel you’ve got to have joyous songs is you start seeing that the world is going to the devil and there’s no hope in everything and pretty soon people might feel like giving up. And I feel that the main job of the musician in this world is to give people the feeling of fight, to keep on going, not give up, no matter what happens“

By Seeger’s own implication, it is love that acts as the “epitaph for all our endeavours”. The final episode of his Rainbow Quest series, however, ending with Buffy Sainte-Marie’s chilling rendition of “My Country, ’Tis of Thy People You’re Dying“, emitted no such positivity. Invoking Samuel Francis Smith’s patriotic hymn “My Country, ’Tis Of Thee”, Sainte-Marie’s impassioned condemnation of the mass murder and displacement of Native Americans could scarcely have been more glacial. Here, the “sweet land of liberty” of Smith’s original becomes one forged by “a nation of leeches” through deceit, coercion and ethnic cleansing. Sainte-Marie’s performance displays a rawness of emotion and almost feverish rage that ought to eclipse any objections to the oscillating nature of her voice. This was protest singing at its most personal, most ardent, and, ultimately, most powerful.

Sainte-Marie, along with the 91-year-old Seeger, continues to actively protest. Tom Paxton, too, has been known to merely change the names in some of his songs from the sixties, such is the cyclical nature of his material. History, though, has failed to recognise the true importance of their early influence, and it remains the Summer of Love that has widely been viewed as the high watermark of the American protest song. But by the time of Woodstock, public opinion over the Vietnam conflict had shifted to the degree that dissenting musicians were largely preaching to the converted. The mid-sixties folk scene is evidence of something very different – the willingness to adopt causes that were radical, unpopular, or both. Localised or specific events were responded to with an immediacy that enhanced the resonance of the artist’s reaction. Whether Ochs’ “Santo Domingo“, Thom Parrott’s “The Aberfan Coal Tip Tragedy” or Dylan’s “The Lonesome Death of Hattie Carroll”, these were songs serving a fixed ideal. This wasn’t the vague pacifism and formless philosophy that would later take hold. This was a collection of musicians declaring that “this is wrong”, “this is unjust”, and “this is what needs changing”. Where potency was allied to urgency, longevity was unattainable. Causes changed, and songs, even musicians, found themselves consigned to the irrelevance of retrospect. But these brief candles could never be fully extinguished, and the embers of dissent have been sporadically re-ignited by artists with new and diverse agendas. In an era where (rightfully or not) the relative dearth of protest singing has been a frequent complaint, the legacy of these musicians is as pertinent as ever. What they accomplished, and the inheritance they bequeathed, was the compelling expression of an earnest and socially conscious sentiment – the uncommon feat of signifying something.