The Magic Gang have been described as one of the most exiting bands on the planet by the online magazine Dork.  The boys from Brighton have been steadily realising their fine-tuned guitar rock EPs for a number of years now but finally they have bitten the bullet and, that’s right, made a full length, self-titled debut album. And its one hell of an indie rock record in case you were wondering.

I remember going to a Magic Gang gig in Birmingham late 2016. They played the top floor of the 02 institute and gave a slick performance to an energetic crowd. I was blown away by how tight the band’s chemistry was and how much of a unit they were. Their electric guitar dominated sound and beautiful harmonies reminded me of the great bands from the 1960s like the Rolling Stones or the Beatles. The Beatles influence is clearly heard on their album in songs like ‘Getting Alone’: its first tangy, drive heavy chord sounds like it came straight from George Harrison’s Rickenbacker.  NME described the band’s sound as the British take on the slacker pop sound of Mac Demarco. The band’s music is certainly as interesting and bright as Demarco’s cult tunes, but defiantly retains a certain uniquely British sound that fits into the British rock cannon. 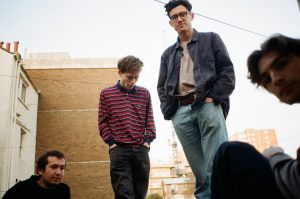 The album packs quite the punch with it’s 12 tracks. It includes all the fan favourites, such as ‘Jasmine’, ‘All This Way’ and ‘Alright’. However, the album also provides us with new material that will get the fans going. The opening track kicks off with ‘Oh Saki’, another energetic banger now part of their every increasing repertoire. The highlight of the track, for me, is guitarist Kristian Smith’s interesting guitar lick that has a country kind of twang to it. The 7th track, ‘Take Care’, displays a moodier sound that the band are capable of, incorporating a rather sullen sounding piano into the mix. The proceeding track ‘Slippin’ is interesting dynamically, starting with a delicately plucked guitar and soft vocal harmonies which leads into a crashing full chorus, even including a skilfully plucked guitar solo. The harmonic interplay between the singers is reminiscent of Flyte’s sound.

Track number 2, ‘All this Way’, is perhaps my favourite song on the album, which is full of many exquisite bangers. Its rhythmic drums make your bones just want to get up and dance. It’s lyrics are catchy and are just asking to been sung along with. The optimistic and lively sound of this song goes to show why the Magic Gang attract such large crowds at their shows these days. ‘Getting Alone’ is another gem worth mentioning. It’s catchy bassline and squelchy guitar crescendo into a strong chorus that will inevitably get the crowd moshing during their upcoming tour.  ‘Jasmine’ is also a contender for my personal favourite song. It’s a typically optimistic and pleasant little love song with a very listenable guitar motif and great driving drums: what a tune!

The Magic Gang are set to realise their first album on March the 16th, accompanied with a nation-wide tour. Do yourself a favour and check out their fab record!