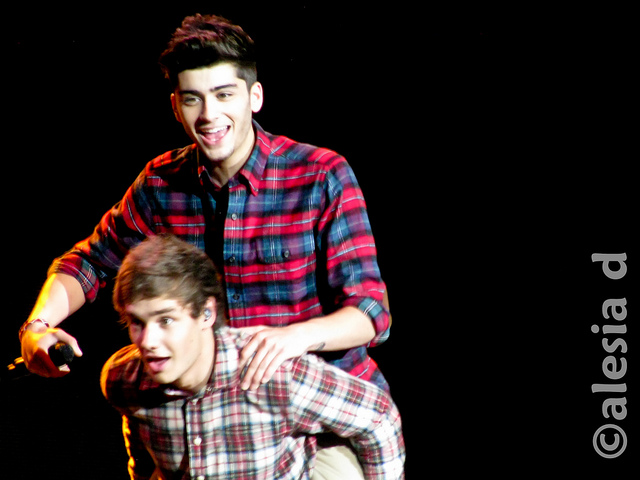 The one that provoked a patronizing shake of my head: Reading about the great troubles and turmoil of One Direction members always gives me great pleasure in laughing at how ridiculously seriously they take themselves. This week, a whole news story was dedicated on music-news.com to how member Zayn Malik “wants to prove he can be the man his girlfriend wants him to be” (girlfriend Perrie Edwards is in the equally-as-annoying girl group Little Mix, so in a way it’s a perfect match, apart from arguments over who gets more time practicing emotional-singing faces in the mirror in the morning). Aside from the fact that I’m not sure he had enough candles on his last Thomas the Tank Engine birthday cake to technically be classed as a man yet, it does make you realise the pettiness of stories taking the place of actual interesting news related to the music of artists rather than their love-lives in publications these days.

The one that made me want to high-five someone: News of Rita Ora has been announced this week on music-news.com, as being the first headline artists for a new LGBT music festival in London, ‘As One in the Park’. To be held in Victoria Park, Hackney, on Sunday 26th May, the new festival will be London’s first large-scale gay festival in over a decade. Having lagged behind the success and importance of gay festivals in many other European capitals such as Berlin, Barcelona and Paris, London is finally catching up and I hope further announcements of the line-up will generate more publicity and enthusiasm for the new festival.

The one that made me surprisingly proud of Parliament: Apart from the brief encounter of Hugh Grant’s rendition of Girls Aloud’s ‘Jump’ in ‘Love Actually’, politicians and music have never fully blended in my mind. However Mike Weatherley, Conservative MP for Hove and Portslade announced this week that DJ Fatboy Slim will play a set on the House of Commons Terrace in March (music-news.com)! The gig is in aid of a competition run by the MP entitled ‘House the House’ in liaison with the Foundation ‘Last Night a DJ Saved My Life’ which endeavors to encourage 16–25 year old to get more involved with their community through music projects- something that I believe to be an incredibly important example of music as a means of bringing people together. The world-renowned DJ boldly claimed that this will be the ‘most unique [venue] to date’, trumping gigs at the Great Wall of China and one in an igloo. At least it won’t be as chilly.

The one that made me feel sick, and the one that remedied it: I never dare to read any music websites on Valentine’s Day in fear of coming across numerous sickening, sugar-coated articles on the subject of ‘Greatest Love Songs ever’, ‘Special Songs for your Special Lady’, or ‘Serenades for a Sweetheart’: enough to make anyone bring up the evening’s consolation wine-and-ice-cream-for-one. I sadly came across the perfect example on NME.com, ’29 Beautiful Lyrics about Love’, which, after hastily skipping through, actually provided the wonderful irony of examples such as ‘Suck it and See’ and therefore greatly appealed to be Valentine’s-Scrooge tendencies. The article I enjoyed even more however, was the oppositional ’You’re an Idiot, Babe- 10 songs of Spite and Revulsion’. As someone in a relationship with someone at a different University, this list provided the satisfaction I was envisioning from the mental image of punching one of the smarmy couples in Bella Italia in the face. Well worth a read for any fellow Scrooges.

The one that I thought made an important point: My argumentative nature is always a sucker for any article with ‘controversial’ or ‘criticism’ in the title, but this story on NME.com spurred a fervent support of one side of the argument in me. Rapper Lil’Wayne, who let’s be honest, has never been one for subtle lyrics (‘B*****s love me’ and ‘Spit in your face’), has been criticised by Stevie Wonder and many others for crudely referencing civil rights hero Emmett Till in his recent song ‘Karate Chop’. The young 14-year-old had reportedly flirted with a white woman in Mississippi and was subsequently brutally tortured and murdered in 1955, attracting much media attention and support for the US civil rights movement. Till’s family have rightly voiced their disapproval with the lyrics and are understandably very hurt and offended. Hopefully the rapper will learn that he’s not the only one who matters in the world and that being a ‘gritty’ rapper doesn’t mean being plain rude.