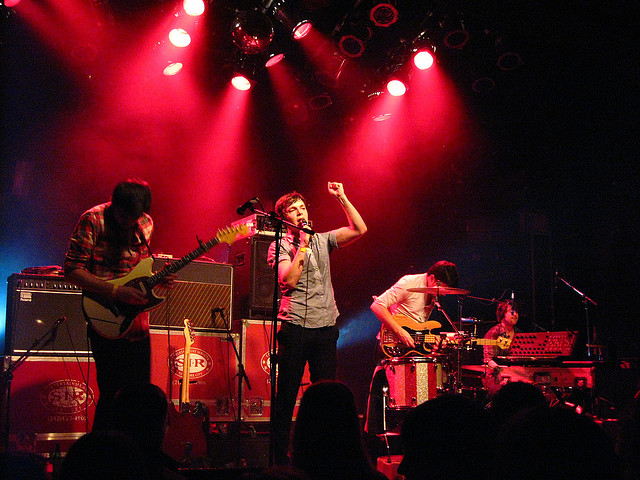 Friendly Fires stand up against suicide.

The one I thought deserved to be heard: Friendly Fires have announced a concert at XOYO in London on December 12th in aid of suicide awareness, publicised in an article on NME. The concert is in memory of a close friend of the band’s, Adam Connolly, who committed suicide early this month. Many other great musicians such as the band Cheatahs, Holy Trinity DJ and Chapel Club are coming together to ‘raise funds and awareness to prevent suicide amongst young men’. I think it’s fair to say that everyone is hoping the gig makes a massive difference and raises as much awareness as possible.

The one that made me say, ‘ohh Susan…’: Susie, Susie. With reference to an article in the Sun, NME have covered news of the exciting up-coming blockbuster; the film of Susan Boyle’s life. Quoted to have been a ‘megabucks’ deal, I am slightly sceptical as to how ‘megabucks’ the return will be. Is it a film for the first-daters out there, smooching in the back row to ‘I dreamed a dream’; or for those girly nights out when all you want to do is… watch Susan Boyle? I was very sad to hear however that lovely Susan had been caught up in a slight Twitter mishap, where her publicists were very keen to send the tweet about Susan’s ‘Album Party’, which unfortunately then blurred to form the somewhat ambiguous; ‘#susananalbumparty’.

The one that made me scream ‘wahoo!’: I was so happy to read on the Guardian that the English National Opera are launching new efforts to entice ‘newbies’ through the doors of the Coliseum in London. This new scheme called ‘Undress the Opera’ presented each newcomer with a ticket tied with a bright red ribbon, with “I’m a virgin” doodled on the front. They were given an amazing price for the best seats, a synopsis of the opera to make the plot more accessible, a chance to talk to the cast and director, as well as the familiarity of a post-performance cocktail. I am totally in agreement with the artistic director, John Berry, who said: “Undress the Opera is a fun title for a subject we are very serious about. We want to change the perception that ‘opera is not for me’”. It sounds like the new scheme is really reaching its aim of expanding the audience, with 92% of tickets sold for last week’s ‘Don Giovanni’ performance being first-timers. Definitely one to keep an eye out for.

The one I thought was ‘so, so, so scandalous’: Also on NME, an article on Chris Moyles, Radio 1 DJ, who has been caught out trying to hide his tax avoidance scandal from the public, where the Times had reported that the Radio host was paying a nominal amount of tax. Claiming it would be detrimental to his income and damage his career due to bad publicity, Moyles’ lawyer filed a report to silence the press, which was subsequently rejected by a high court judge on the grounds that “the fact that a taxpayer is rich, or that he is in the public eye, does not seem to me to dictate a different approach. On the contrary, it may be that hearing the appeal of such a person in private would give rise to the suspicion that riches or fame can buy anonymity, and protection from the scrutiny which others cannot avoid”. A very valid justification, I reckon.

The one that made me think, ‘durr’: I still think it’s stupid when people try to get away with scissors and 500ml bottles of creams or sprays in their hand luggage at the airport check-in; but a hand grenade? I suppose it’s not specified on the ‘sharp items’ poster on the check-in table so maybe it’s okay? Wayne Coyne (The Flaming Lips) was quoted on the Guardian to have ‘not quite thought’ about it being a shady thing to have in his luggage. He’d picked it up at a party (not exactly a normal party-bag gift, but then again I have never been to a star-studded party full of famous bands) but said it was ‘non-explodable’ (technical term), but Oklahoma airport security still took it very seriously, shutting everything down and causing many people to miss flights. So if you’re thinking about it- don’t put the grenade in your luggage; just leave it safely at home.