The Composer Who Ignored Gravity 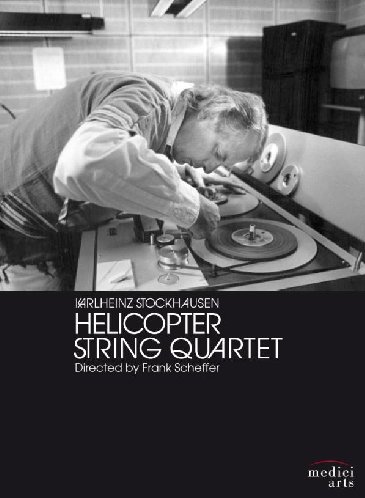 “Stockhausen, the composer with a mind best described as complex”

Karlheinz Stockhausen was one of the greats. Not that you would obviously think of him alongside the trinity of Bach, Mozart and Beethoven, but I assure you he was one of the greats. Even if you can’t name one of his works you will have seen a picture of him – he was on The Beatles’ “Sergeant Pepper’s” . Stockhausen had one of the most varied outputs of any composer. He didn’t shy away from new genres or new technology and was not perturbed by what was considered physically possible. So where to start with a contemporary composer who explored everything?

I first grew to love Stockhausen whilst watching the on his Helicopter String Quartet. It was not a piece that I had set out to explore, and at the time I was only what could be described as wary of contemporary music. This was the point where my interested was sparked by a composer who ignored gravity. In the documentary he describes recurring dreams of flying; over mountains or as the ultimate way of enlivening a boring dinner party.

Written for the Arditti String Quartet the piece realises this dream. The quartet is one scene from his Licht cycle of operas; seven operas each named after a day of the week, the Helicopter Quartet is part of Wednesday. In the quartet four string players circle the concert hall in separate helicopters. Their playing is streamed into the hall mixed with the sounds of the machines. The quartet isn’t melodic and is a challenge to listen to, but I promise it’s worth it. The strings are scratchy and brash to sound like the vehicles they fly in, and this is interspersed by stylised counting in German. If you let yourself just listen to the piece you’ll discover how the strings bring out a musicality in the engines and, I think, find links between sounds of nature and sounds of technology.

There is no point just listening to this piece, you need to see it; luckily, a popular video streaming site has footage of part of the performance. You won’t get the multi-speaker experience that the live performance provided, but due to the nature of the performance the chances are that you never will. What you will get is a snapshot of what was a revolutionary moment in contemporary music.

While researching this quartet I came across a book where it was suggested that the performance didn’t need to be entirely live as Stockhausen was mixing the sounds within the concert hall. Well maybe it wasn’t a necessity but it was magnificent and should the arts be about necessity? Even people in the local area not present at the performance would have been aware of it. Four helicopters circling, what a sight. I think a performance of this piece would still create the same feeling of wonder even in today’s modern, jaded society.

What does the documentary add to this piece? I think the first thing that it brings is a greater insight into the inner-workings of Stockhausen, the composer with a mind that is best described as complex. He was a perfectionist. He had a vision for this quartet and at that that time there was nothing more important for him that to see it realised. He attended nearly all the rehearsals and made the players repeat the numbers in the intonations of his choosing until he was entirely satisfied that they were pronouncing them right. As a composer he could not let go of his work and, although this is admirable, he must have been a nightmare to work with. You cannot deny that this work ethic produced the most fantastic result in the final performance.

The documentary brings another level to the music to a newcomer to the avant garde – the composer is able to explain his intentions in detail and we are able to view the compositional process. This level of access is the only way to begin to . The film also provides a comeback to any one who has ever said “contemporary composition takes no skill; it’s all just a bunch of weird sounds”. The hours of planning, tweaking and rehearsing that goes into a grand performance such as this, as documented in the film, shows as much skill as any traditional symphony. I must say now that I am not looking to make direct comparisons between contemporary and traditional composers, but these comparisons are made by people who aren’t fans of the contemporary.

I have to admit that one of my absolute favourite things about this quartet is not actually related to the music. The score is colour coded. This in itself brings pure joy to my being which is heightened when watching the final performance where each player wears a shirt matching their colour on the score. What power this composer had to dictate the way his performers dressed!

What Stockhausen created with this string quartet was pure theatricality and a feeling of escapism. The order of composition was ideas first and reality when it really needed to be considered, which created a purely fantastical work. So if you want a piece that will change your perception of what is possible in music, listen to Stockhausen’s Helicopter String Quartet or, even better, watch the documentary.