The Bubble Playlist No. 25: Afrobeats 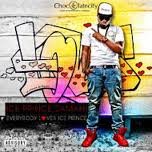 Ice Prince – ‘one of the biggest names in Afrobeats’

Being a true musicphile, I am constantly propelled to look out for new music. Understandably the UK music charts, with odd exceptions such as ‘Jai Ho’ and ‘Gangnam Style’, are usually dominated by artists from Europe and America. Thus, the Afrobeats artist D’Banj, with his 2012 hit song ‘Oliver Twist’, has been a refreshing and welcome addition to our sometimes predictable charts. Afrobeat originated in the 1960s with West African artists such as Fela Kuti and Tony Allen. This musical style is largely instrumental, characterized by large bands playing a number of instruments. It is the tinker pan drumming style made famous by Tony Allen which really made Afrobeat though, and without it “there would be no Afrobeat”. In its current form Afrobeats is a relatively recent phenomenon: a perfect blend of funky house, hip-hop, jazz and traditional Yoruba music. This exciting compilation has produced a sound which is vibrant, fresh and sensual to the ears.

Western artists have also recognized the raw talent and potential of Afrobeats stars: Kanye West has a signed on D’Banj and Akon has snapped up P- Square, Wiz Kid and 2Face. These homegrown artists have flourished in their own countries and in the London underground music scene; however, they have yet to make a significant impact on the general UK music scene.

Whether or not Afrobeats is West Africa’s best export is of course hugely debatable. Few, however, could argue the transcending power music can hold: its ability to melt the sometimes rigid barriers of language, gender and culture. The genre may have been made to be danced to in scorching hot weather with minimal clothing, but that it can be enjoyed in even the dreariest settings is a testament to Afrobeats and all that it stands for. Who knows, there may come a time when hearing Afrobeats in clubs and house parties across the UK will be the norm. So is the UK ready for Afrobeats? D’Banj certainly believes so and I am with him on this one.

Here, D’Banj offers us a humorous insight into the girls he likes using a mix of Nigerian pidgin with standard English. Though this is not my favourite, it deserves a mention for opening up the genre to the West and for its well-deserved commercial success.

Ice Prince is one of the biggest names in Afrobeats and is certainly one to look out for. Despite the fast beat, there is something a little mellow about the artist’s voice in this song. This combination has given the song an almost ethereal-like feeling: it’s so easy to get lost in the rhythm, and for that, I love it.

‘Oleku’ was an instant hit with my hip-hop, jazz, and indie loving housemates. There is just something so enchanting about Ice Prince’s voice and the slow rhythm is incredibly provocative, commanding one’s instant attention.

‘Aboki’ means ‘friend’ in Hausa and this one is one of Ice Prince’s catchiest songs. The song is so uplifting and conjures up tantalizing images of dancing afternoons away under a blazing sun.

It’s the beat in Afrobeats that I find so alluring, and it really comes into its own in ‘Alingo’. It really does race through my veins, in an almost hypnotic fashion, whenever I have a listen.

2Face eases the listener into ‘African Queen’ by beginning slowly, allowing us to absorb the melodic quality of his voice. It is a love song, as well as an ode to his love’s physical beauty, which is referred to as being specifically African.

Last but not least, Olu Maintain’s ‘Nawti’ is easily my favourite. The artist’s voice oozes with undisguised sexuality and I challenge anyone who hears this song not to want to move to it. Listening to this never fails to bring a smile to my face even when in the worst of moods, and I can unashamedly listen to this on repeat.