Sounding Out the Manobo Mountains of Mindanao 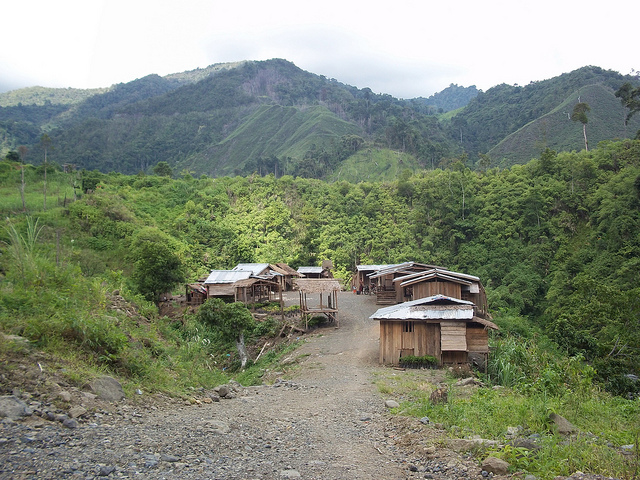 A mountain village where the sounds of Lady Gaga may resonate.

I remember well the first time I heard Travie McCoy’s “Billionaire“. I had unwittingly paid extra for the air-conditioned bus, but I didn’t mind. After all, this was to be a six-hour journey from deep in the Bukidnon mountains of Mindanao in the Philippines to the urban maze of the city of Davao. This was the end of my few weeks working as a missionary and ethnomusicologist amongst remote Christians of the Manobo tribes. With a broken watch and a broken phone, time stood still. The twin boys sitting on their father’s lap a few seats down kept making faces at me. I had overcome the shock of being stared at long ago, and was content to smile back. When a lady boarded with bags of durian, I was not alone in my amusement at her anti-social conduct. Durian on a long hot coach journey? Really? Believe me, they smell awful.

We stopped at a town which must have been about half-way. Street vendors with big platters of confectionery raised above their heads bid for our custom as passengers bought their merienda from the comfort of their own seats by leaning out of the coach windows. And then it happened. Blaring out from the coach radio across the unintelligible mayhem, came a gently poised reggae beat, a great tune and… the first profanity I had heard in over a month! No wonder “Billionaire” caught my attention! Even here, life was not immune from prosperity ideologies communicated through expletively formulated lyrics set to a catchy tune.

That all sounds very serious. But with my ethnomusicologist’s hat on, I can’t help but look back and see that World Music has become Global Music. Just as our own musical culture has increasingly sought after “ethnic” sounds from all over the world, whether in explicit borrowings or obscure sampling, I don’t think we realise just how much the rest of the world wants to have a piece of what is perceived as “Western Music”. Even back in the villages I would wake up in the morning on a hard bamboo bed, stumble to the outdoor C.R. (comfort room) to wash myself using the freshly collected bucket of water, and use my fingers to eat a breakfast of rice and pungent dried fish, all to the accompaniment of Dido, Elvis Presley and Lady Gaga. Yes, even Lady Gaga has made it onto the karaoke machines which resound throughout the Manobo villages. 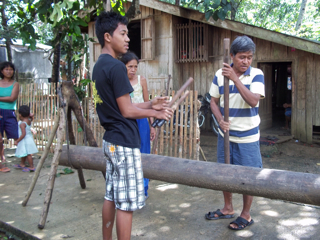 My work and dissertation research had been about worship music amongst the indigenous Manobo Christians, looking especially at the growing revival of their traditional music, “redeeming” it for use in Christian worship. Of course, as a westerner, I was most excited about watching a suspended log getting pounded with sticks, and a man chanting a prayer while dancing and playing a two-string lute. We can’t help but be attracted to different forms of music making, just as they are fascinated by our dull foursquare tunes and harmonic progressions. Those first hymns introduced by the missionaries live on, and if you could see a Manobo church singing “How Great Thou Art” at the tops of their voices you might agree with me that they do it better than us. For a start, they know all the words and guitar chords by heart. They add extra beats, they bend the rhythms and they can really dance. New worship songs have been composed and memorised by their own people, but they sound strangely similar to the “modern hymns” introduced by the missionaries in the 1980s. Their traditions continue, in the instruments, the chanting and the dancing, but so do their newly embraced traditions of guitars and songs which sound so much like our own. They have made it Manobo, and they love it.

Should we be worried? How can we expect remote communities to stay that way if our own culture is so eager to use and have access to all the sounds of the world? I’m sure I’m not alone in my Spotify addiction, with a world of music at my fingertips. Imagine my amazement when I found “Music of the Magindanao in the Philippines”, the recordings that formed part of an obscure PhD thesis of 1963 which has become one of my primary dissertation sources. Other “World Music” gems such as Solomon Linda’s Mbube and the Brazilian triangle music of Zé Preá Dos Teclados are waiting to take to your stage in Spotify’s vast library. Look them up and see where they take you.

Whether we are possessed with a greediness for musical variety, or a healthy “balanced diet” of a range of music, it would appear that this synchronous diversity is just as prevalent at home as it is in places as remote as a Manobo village. I think this is something to be celebrated, as we can engage in an appreciation of each other’s music. Rather than leading to fundamental change or cultural erosion, this simply increases the diversity of our musical experience. As soon as we recognise that we are not the only ones who like to discover new sounds, our attitude to the global enthusiasm for western pop music and hymns will change. Yes, the indigenous traditions must be nurtured, and our own music cannot be imposed. But if it is accepted, who are we to stop it? We will have realised the power of music to transcend economic, geographical and political divides. Contrary to what Mr McCoy might think, you don’t need to be a billionaire to understand the situations of people in other parts of the world. Sometimes it just takes a listening ear.