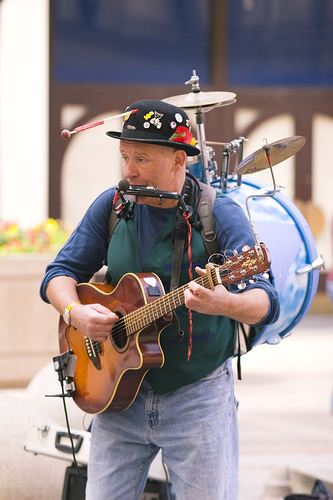 What does the future hold for the one-man band?

Drum strapped on back, guitar in hand, and never without the indispensable harmonica – the archetypal one-man band has been rambling through the streets for well over a century. Characterised by a mishmash of equipment and an abundance of mysterious appendages, such performers can still be seen playing for pounds and pennies all over the world. Let’s not forget though, that the so-called “king of the buskers” Don Partridge, did achieve notable UK chart success in the 1960s as a one-man band outfit. After reaching no.4 with “Rosie” in 1968, Partridge went one place higher with “Blue Eyes” later on in the same year. Whilst commercial success for this genre of performers might now be even more improbable, the tradition is being well and truly kept alive. Durham’s very own one-man band, Nick, can still be seen on Elvet Bridge striking out his infuriatingly catchy tunes on numerous acoustic instruments. Elsewhere, the quintessential player has been updated by electronic augmentation, as shown by Croatian YouTube hit Cigo Man Band, who uses an amplifier alongside the traditional set of instruments in order to increase his volume. Still, though, the emphasis remains very much on warmth and good cheer. It’s all kazoos, bells and comedy horns, and the performer retains the homespun joviality that Partridge radiated more than forty years ago.

But electronic amplification is the least of the changes that technology has wrought upon the one-man band. The ability to record sounds in real time and play them back has massively altered the scope of the multi-instrumentalist’s capabilities. Looping and overdubbing has long been possible – as testified by this 1953 episode of Omnibus, in which Les Paul and Mary Ford explain and demonstrate the possibilities of multitrack recording. At that stage though, adding components was a time-consuming process, and the real-time potential of overdubbing had yet to be realised. The advent of “live looping”, however, greatly enhanced the possibilities of multitrack recording outside of the studio. Once again it was guitarist Paul who was at the forefront of this technological advance, creating his “little black box” that, as he joked, would put the drummer out of business. Able to instantly record and play back short musical phrases without the need for cumbersome equipment, the one-man band no longer had to play all instruments at once, but could create such an effect at the touch of a button.

Although the technology pioneered by Paul has altered little to this day, the introduction of pedal loops and longer delay times has enhanced the scope of the musician’s control. It’s a technique that has been embraced by some inside of the mainstream, too. KT Tunstall’s performance of “Black Horse and the Cherry Tree” on Later with Jools Holland, for instance, uses live looping to build layers and achieve a noticeable climactic crescendo. Naturally, there is a heavier emphasis on repetition and fewer dimensions than there might be on a studio-recorded version – such is the upshot of adding layer upon layer. This limiting factor can, though, be countered to a degree by the use of multiple pedal loops, allowing individual layers, or “tracks”, to be removed as well as added. Andrew Bird’s rendition of “Tenuousness” for From The Basement, illustrates that the process need not merely be one of linear accumulation, but that independent elements can be selected and muted with a much greater degree of flexibility. As there is no pre-recording and the music is all generated live, the performance still retains a large amount of the spontaneity and unpredictability that it would possess if being played by several musicians.

The live aspect is not always successfully achieved by live-loopers, however. In Keller Wiliams’ “Breathe” at All Good Festival, for example, too much time is spent switching between instruments and fiddling with electronic controls, with the performance element diminished as a result. Although none of the music is pre-recorded, at times it might as well be a backing track. There are moments when the audience is unable to see any music being created, and the complexity of looping multiple instruments and managing them acts as a constraint to the musician. But even if the looping technique is mastered, at what point does proficiency cross over into showmanship and self-indulgence? Elliot Cheng’s video of “Standing on Tables” demonstrates his remarkable talent on a number of different instruments, but it also highlights both the practical limitations inherent in looping technology and the relative strengths of collective performance. It’s a massively impressive routine, of course, but is this a case of a musician being a jack-of-all-trades and master of none? It’s no mere coincidence that the more critically acclaimed and commercially successful multi-instrumentalists have a tendency to perform with at least one other band member. Patrick Wolf, despite being proficient on both the violin and keyboard, performs his song “Magic Position” with outside accompaniment, allowing for greater attention to be focused on individual instruments. Andrew Bird, too, tends to play with a percussionist, as in this performance of “A Nervous Tic Motion of the Head to the Left” at Bonnaroo. Both artists could have played these songs solo with the aid of pedal loops, but the variations and nuances that different performers give each instrument could well have been lost.

Is this then the future of the one-man-band? Controlling endless instruments and infinite tracks through the use of the pedal loop? It’s doubtful. Instead, it’s far more likely that musicians that make extensive use of MIDI (Musical Instrument Digital Interface) technology will increasingly dominate the field of solo performance. Exclusively reliant upon electronic triggers to generate notes, MIDI enhanced instruments can artificially produce a multitude of sounds without the need to mimic their acoustic counterparts. A drum machine can thus become a saxophone, just as keyboards can be configured to sound like cellos. The imitative nature of electric guitars or violins, that had previously lent a certain authenticity to such instruments, no longer applies. Just as the widespread use of synthesizers during the 1980s showed, conformity to such principles is no hindrance. Now, though, the endless banks of keyboard synths have been replaced by much more portable multi-function electronic instruments such as OrbVroomer’s customised apparatus that makes use of foot pedals, striking implements and a whole host of other bizarre gadgetry. His performance of “On the Verge” makes no use of looping technology, and his peculiar and improvised contraption has striking parallels with his more ramshackle busking predecessors. It’s a far cry from Partridge, but perhaps these kind of resourceful musicians represent the closest modern equivalent to those performers jauntily roaming the streets with what seem to be an array of modified kitchen utensils attached to various body parts.

Despite the technological innovation of these modern appliances, such instruments may still be seen as being hindered by the acoustic tradition due to their reliance on percussive striking, keyboard playing or string plucking. Other electric instruments such as the Tenori-On have dispensed with such formalities, utilising a touch screen control through which sounds can be selected and manipulated. This particular instrument, used by Little Boots on her UK no.6 hit “Remedy“, appears to hold almost limitless potential for musical manipulation. Loops can be created, sound samples pre-loaded on, and distorting effects added. Nevertheless, in performance, the use of the Tenori-On is, ultimately, just somebody pressing buttons on a screen. Its LED display provides some distraction, but hardly has the same visual impression as a live violin solo or Townshendian windmill. Realistically, the Tenori-On and its competitors such as the Monome appear destined to become state-of-the-art musical toys for mass consumption rather than instruments for use in live solo concerts.

Of more significance for the future of the one-man-band are those instruments that dispense with hardware altogether. Laser technology, for instance, has already been put to use by artists such as Jean Michel Jarre in his live rendition of “Third Rendezvous“. Further advances in 3D projection could mean that the spectres of keyboards could be played in thin air. But perhaps the most significant technological advance is in the field of motion capture. Catalysed by developments in computer gaming, most importantly through Microsoft’s Kinect and Sony’s PlayStation Move, motion-sensing technology could be manipulated to the point where the body itself could become the instrument. This is beyond even the technology of “bodysynths” that require hardware to be attached to the skin, and instead relies on a 3D imaging process that can recognise and interpret movements and muscle contractions. Suddenly Rowan Atkinson’s “The Piano Player” and “Invisible Drum Kit” sketches might not seem so absurd. Just as the stamping of a foot causes a drum beat for the Cigo Man Band, so too could any gesture – the shrug of a shoulder, a smile or a wink – be programmed to produce a specific sound. Add to that the effects and looping technologies that have been available for decades, and the possibilities multiply even further. The body could become the ultimate instrument, able to generate any sound, to manipulate that sound and also to layer it. How long will it be before we can conduct entire, invisible orchestras with the definitively portable instrument – the human body? How long before the one man is his band?