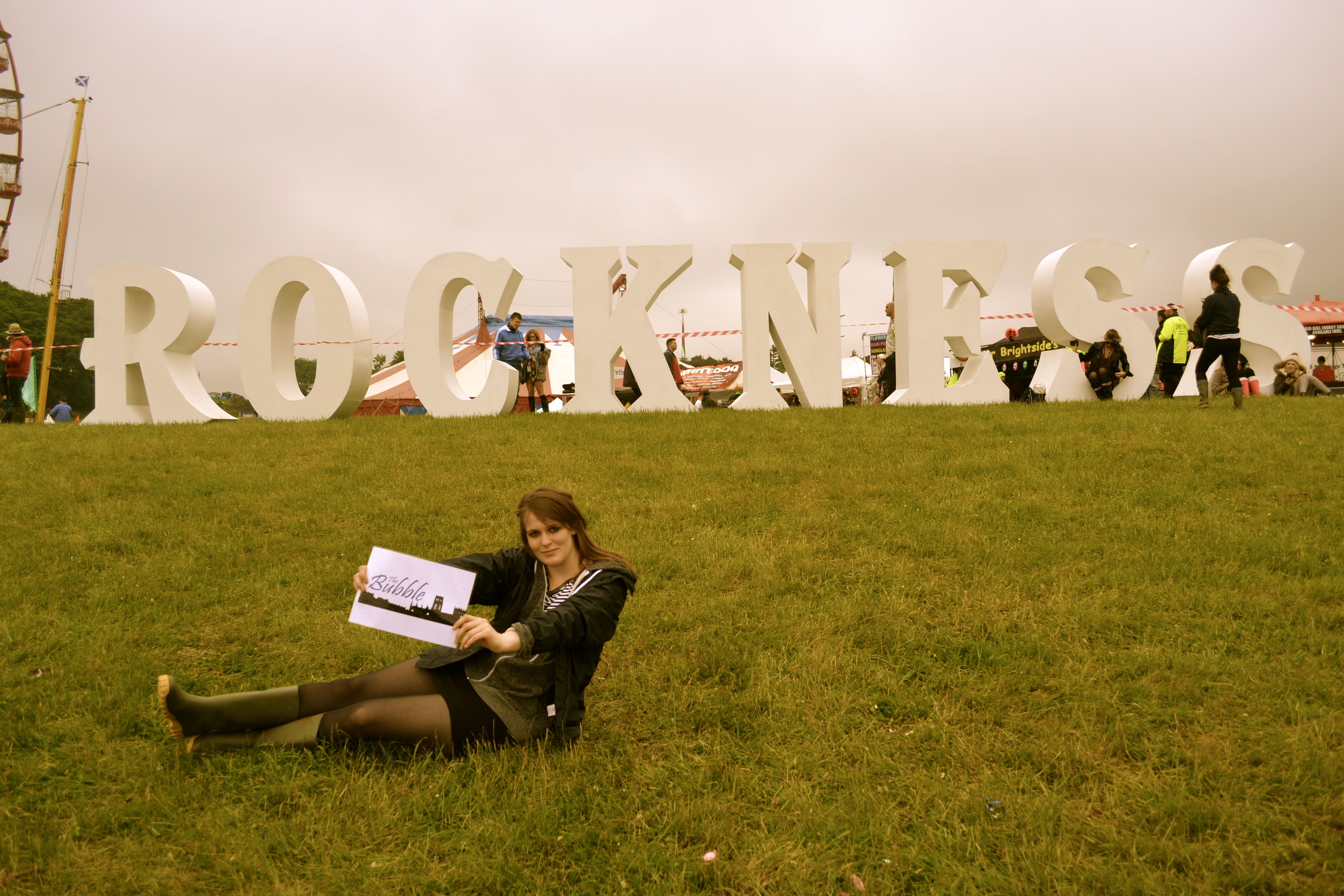 Reporting at RockNess for The Bubble

Being someone who gets queasy from travelling, I am not looking forward to the next five hours. Especially when the train guard at Durham Station glances at my ticket saying, “Another one with a long journey ahead”… But once aboard the carriage, the lush green fields and glistening sea I whizz past pleasantly surprise me.

I chat my way through most of the ride with my two best buds and wind up at Inverness in north Scotland at 8pm. The town centre is super-cute and the river that weaves through it is stunning. We check in to a dainty little B&B and after a good night’s sleep (and a quick booze trip to Tesco) we hop in a taxi to the festival site.

Once there, I’m amazed to be pitching my tent a two minute dawdle from a view of Loch Ness, surrounded by mountains. It might be foggy but this is marvellous. The afternoon draws on and I’m gallivanting around the festival site. I wander past a huge inflatable church where I’m greeted by a hyper middle-aged nutter. She invites me to get married in full bridal threads (at a price). I decline but six men dressed as monkeys are gathered at a nearby picnic bench awaiting entry to the disco-charged place of worship.

Onwards I potter and I’m seeing blindfolded space-hopping competitions hosted by twenty-somethings in pink boiler suits. “I only want to see you fanny bashing that space hopper” the lass with the fluorescent mic exclaims. Perhaps placed strategically nearby in case of Tigger-type injuries is a Welfare tent. Free condoms, tea, drug advice and even beds to nap on are available inside this haven. I bear this in mind and head off to catch some music.

­Realising it’s two minutes from Mystery Jets’ slot on main stage I hurry over and manage to get a comfy spot close to the front. The bass is so powerful it makes my nose vibrate. They play a mix of old and new songs and I catch up with them afterwards in their dressing room. The boys tell me they’d be “a lighter shade of pale” if they were a colour and when they get writer’s block they “smash it with a sledge hammer”. 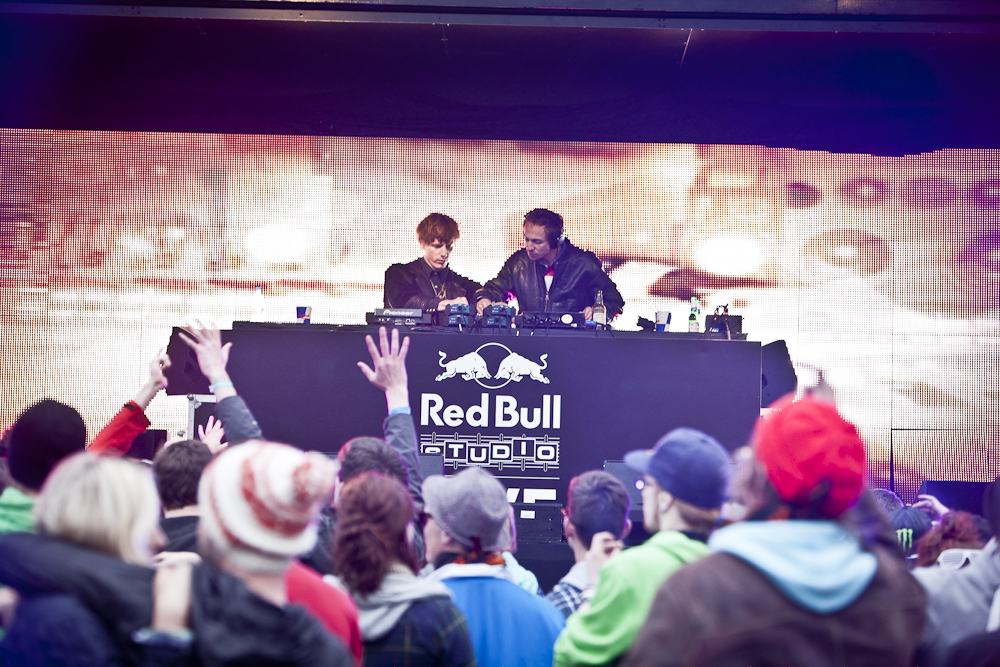 I spend the rest of my day at the Red Bull Studios Live festival stage, where DJ sets from Mystery Jets, Hudson Mohawk, Friendly Fires and Kobi Onyame (amongst others) will take place over the weekend. Carefree and cocktail in hand, I dance the afternoon away with my chums. Passers-by are beckoned in by feel-good remixes of numbers like Outkast’s ‘Hey Ya’ as well as gritty hip-hop mixes and drum & bass. I catch Mumford & Sons on the main stage, head back to my tent and nod off feeling content.

I’m awoken in the early hours, heart racing, by a clamour at the foyer of my tent followed by a ‘Sorry’ in a thick Scottish accent. A minute later the chap, who’s clearly had one too many, is struggling to eject his bottom from my now crumpled porch. The next morning I wake to find that Loch Ness has effectively leaked into our dwelling. I double-take and the puddles are a pinkish red… The Skittles vodka I carefully concocted two days ago has seeped onto my mate’s bag. The poor thing is so drenched it’s paralytic! But it’s all in the festival spirit and after a swift cleanse of the tent we head off to the GoldenVoice Arena.

Comedian Daniel Sloss performs his usual spiel about being bad in bed and is followed by the man we’ve all been waiting for: Tim Minchin. I’m right at the front and his devilish eyes twinkle in the darkness. As he spits out his lyrics and pounds his right leg up and down we are gobsmacked by his talent. He’s seemingly smug with himself when he conducts the crowd to repeat the phrase ‘moose semen’ after him. “Ed f****** Sheeran didn’t say f****** moose semen did he!?” Minchin bellows. Fittingly he goes on to sing Prejudice, his slapstick tune about anti-gingerism. By the end of his set we’re full of cheer. 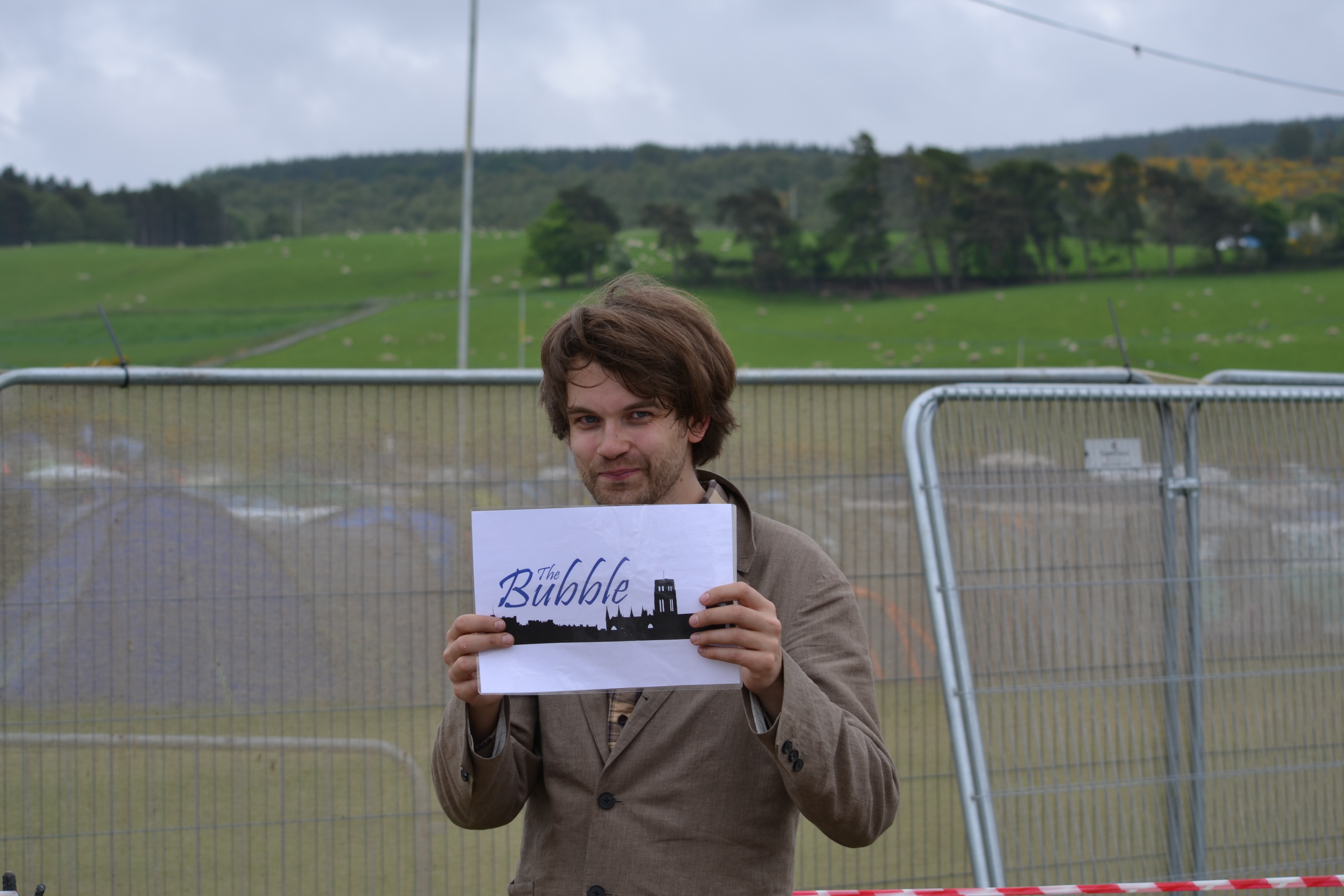 The adorable Fyfe Dangerfield from Guillemots

Guillemots are next on my to-see list and Fyfe Dangerfield’s singing is expressive as ever. The multi-national group play some wonderful tracks from new album Hello Land! – the first of four albums to be released this year. When Fyfe exits the stage he tells me they haven’t played on stage for a while so he’s not confident it went well but I assure him they went down a treat. We have a lovely conversation and it’s clear he’s a really nice guy. “You can’t pay too much attention to thinking about what people want from you ‘cos you get lost”, he tells me.

I’m now a very hungry caterpillar so I nosh some noodles on the hillside looking down at the main stage. DJ Fresh Live is playing – prime background music for a chilled pit stop. A cover of Coldplay’s ‘Paradise’ wildly stimulates the crowd. As darkness falls, a sea of glow-in-the-dark mouse ears makes its way to the main stage. Deadmau5 appears on a tall podium and for two hours he orchestrates an explosive rave.

Sunday morning, and the final day of RockNess has arrived to my dismay. Little Comets are on main stage and they really impress the fans and first-time listeners with their upbeat indie ear-pleasers like One Night In October and Joanna. “We’re guna play quite a soft sad song (Violence Is Out Tonight) now but it’s Sunday afternoon so it should work” lead singer Robert utters. It’s beautiful and gets a big thumbs up from me for its catchy beat. Today is already a winner as far as I’m concerned. 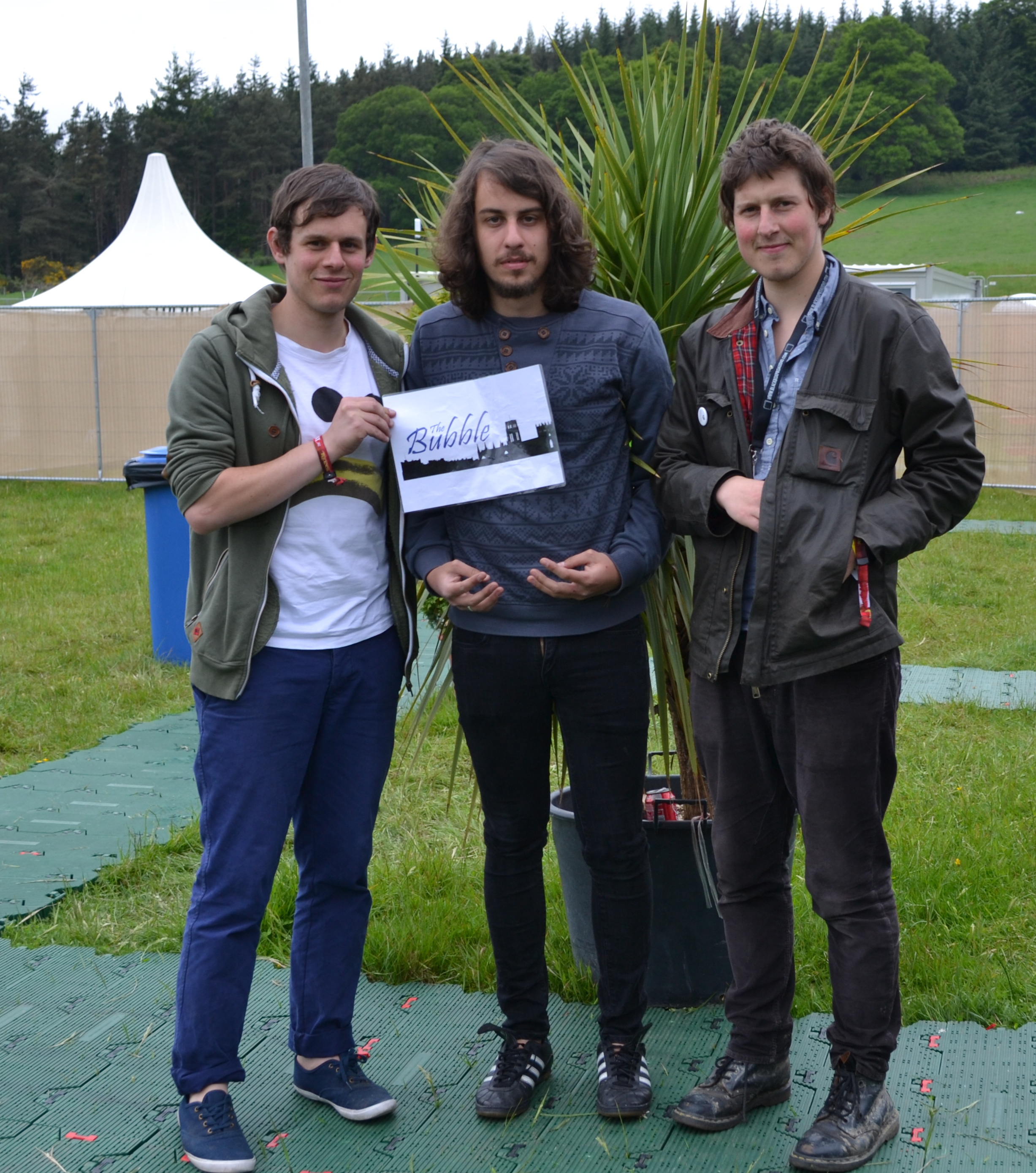 I lead my mates to see Totally Enormous Extinct Dinosaurs. The laid back yet electrifying feel to Orlando Higginbottom’s dance music is killer. We’re in a trance, helped by the flickering strobe lights and on-stage robotic dancers. And that’s not the only dancing of the day – we find ourselves grooving to a different genre of music with Chic feat. Nile Rodgers on main stage. “Do you feel like freaking out?” we’re asked. Yes we do. The disco legends really get us going with big hits Le Freak, Good Times and Everybody Dance. This is the best live performance I’ve ever seen and I’m sure most other on-lookers are thinking the same.

I’m wowed by the weekend. I leave the campsite the following day ready to return next year.