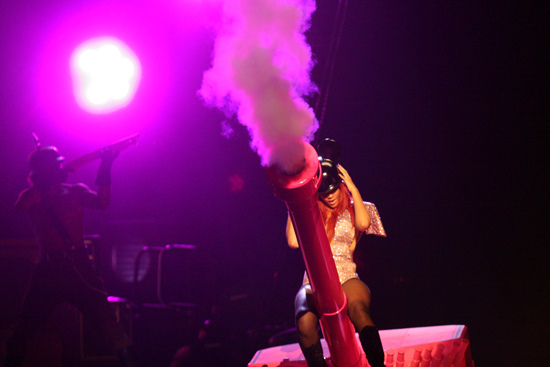 Rihanna and her sexual liberalism has always provoked controversy

Everyone knows Rihanna is one of the biggest sex symbols of our generation. Song titles such as ‘S&M’ and lyrics to songs such as ‘Birthday Cake’, ‘Cockiness’ and ‘Rude Boy’ leave little to the imagination. An avid fan of Rihanna and her music, I find it a great shame that her talent is seemingly sacrificed by her public persona. She is adamant not to be a role model for young girls, evidenced, for example, by recently being spotted donning a T-shirt plastered with an image of a girl pleasuring herself, captioned ‘DIY’. In Rihanna’s defence, why should she be expected to be a role model? Her job is to make music and money, which she certainly does well; she has sold over 30 million albums and 120 million singles worldwide, which makes her one of the best-selling artists of all time. In 2012, Forbes ranked her the fourth most powerful celebrity of the year, with earnings of 53 million between May 2011 and May 2012. However; what’s most important, is that in the same year, TIME named Rihanna one of the 100 Most Influential People in the World.

Which is why when recently scrolling through her Instagram photos this week, coming across a photo shoot outside a mosque in Abu Dhabi, I have to say I was shocked and nervous about how it would go down in the Middle East. The star performed in the capital of the United Arab Emirates as part of her ‘Diamonds’ world tour. Having lived in Oman, a stone’s throw from Abu Dhabi, as a British ex-patriot for two years between the ages of 11–13, it was no surprise to me to find that according to the BBC, Rihanna was asked to leave the famous Abu Dhabi mosque complex after posing outside the building for an unauthorised photo shoot.

A statement from the Sheikh Zayed Grand Mosque Centre said she was asked to leave after “inappropriate pictures” were taken. The photos “did not comply with terms and conditions” of organised visits. The singer was completely covered in an all-black jumpsuit, but nevertheless, several of the photos were shot in suggestive poses, as she reclined across the mosque’s sacred courtyard.

It gets worse. In true diva fashion, Rihanna first arrived “at an entrance that was not designated for visitors”. Without launching a debate over celebrity superiority, there is a line; a mosque is a sanctified, beautiful place of worship. It is a requirement as a woman to be fully covered on visiting mosques in the Middle East; female guards would frantically arrange my hijab (headscarf) to ensure every thread of hair was completely covered. Therefore, naturally, a certain level of decorum and respect is expected. The captions of the photos don’t help: one of her ‘sun bathing’ by a pool of water outside the mosque with the hashtag ‘NoTanLines’, and another of her scowling intimidatingly at other Arab women at the mosque entitled “Bitch Stole My Look” are simply provocative and insulting.

Rihanna unsurprisingly has a colossal impact on her millions of fans. The influence of her promiscuity and rebelliousness on her younger female fans is a source of much scorn, and without belittling that in the slightest, there is a greater issue here. Rihanna’s behaviour in this situation, due to her popstar status, will go completely unpunished. Rihanna’s publicity team has yet to make a comment, and the photos were still uploaded.

Rihanna, you can wear a T-shirt emblazoned with a woman pleasuring herself in America and (almost) get away with it, but you can’t so openly disrespect the people of a country in which you are visitor.