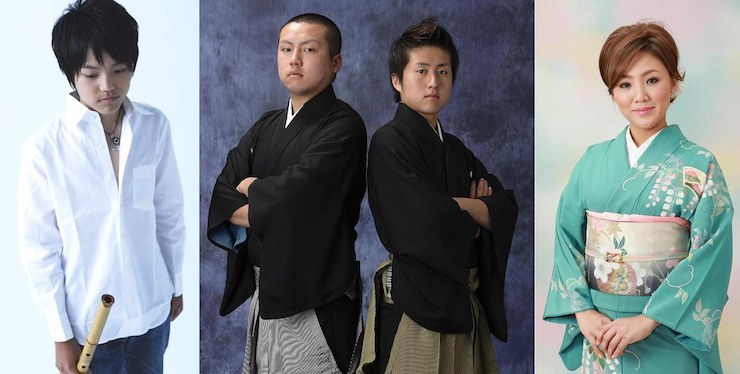 Musicon’s East Asian Music Festival (12th-14th March 2013) was the latest in a long line of groundbreaking events at Durham University which have been happening regularly since the late 1970s. After the success of last year’s bamboo- themed festival it was interesting to see where the festival would place its focus, and with this festival of song traditions they certainly lived up to expectations. There was something quite surreal about sitting in one of the historic buildings of Durham with a view of the cathedral through a crack in the curtains and watching musicians from East Asia transform the atmosphere ways that seemed impossible. The festival included performances from leading musicians from Korea, Mongolia and Japan, as well as some fascinating scholars and even free workshops by the performers. This was a festival not only about performers presenting their music; it was about understanding that music too.

The scene was set concisely by one of the festival organisers Dr. David Hughes. An expert in the field of Japanese music, Hughes gave a fascinating talk on vocal music from all three of the countries represented in the festival, touching on issues such as the different uses of song and singing techniques. The traditions heard over these three days in Durham seem to be to some extent still living traditions in their own countries and Hughes posed the interesting question of what is the ‘natural voice’? These traditions that were so captivatingly new to Durham University Music Department are alternative ways of musical life transmitted from person to person; how much have they changed over their history? Another, and possibly the most alarming, issue brought up in the talk was how recording technology has and will affect aural traditions; how recording for ‘preservation’ of art forms may in fact mummify traditions which have never before been recorded in any form.

The concerts themselves were musical pictures of perfection. The opening evening concert ‘Korean Songs of Restraint and Release’ by Moon Hyun and Lee Joo-Eun featured two Korean song traditions. The first half included a variety of gagok (a classical Korean form of short song) which exploited the huge range in sonorities that can be produced by flute and voice, and indeed the musicians seemed to communicate through timbral changes and react to the subtlest of signals. Traditional Korean costumes were worn throughout the concert which, combined with the white panels behind the ensemble, made for a convincing if temporary transportation to their world.

The second half of the concert, performed by singer Lee Joo-Eun and Kim In Soo playing Buk (barrel drum), was particularly impressive. It was a performance of ‘The Tale of Chunhyang’, one of the moral tales often performed in the storytelling Pansori genre. Pansori performances can go on for as much as eight hours, so on Tuesday evening Durham saw just a snapshot of the tale in Korean with English translation projected onto a screen and I was captivated by it from start to finish. Joo-Eun’s use of gesture and her skill as an actress matched her impressive vocal control, allowing a British audience, with the aid of the translation, to fully appreciate the Korean values expressed by the tale as well as its comedic twists.

The next day a breathtaking performance by Urna Chahar-Tugghi of Inner Mongolian songs was a privilege to witness. Urna Chahar-Tugghi entered and immediately had the attention of everyone in the room as she swept into a beautiful performance of a collection of songs, some of which were her own, and some of which had been learnt from her community. As with the Korean musicians it was easy to understand why she is a leader of her field and a star at home; she had total control, mastery of her voice and the art of performance, but also an ease and airiness that made the performance personal and engaging, particularly for the young girl in the front row who was enchanted by the idea of ‘a song for horses.’

Sadly I could not be at the final concert of the festival, ‘Songs to Energise and Enchant’, a concert of Japanese folk songs performed by the group ‘Abeya’ (meaning ‘House/ Family of Abe’), but in the taster they gave in the talk by Dr. Hughes they proved themselves to be excellent. Along with all the performers in the festival, they are an example of young musicians who grew up in their country and chose to dedicate their life to learning their community’s traditional music. The fact that they have all been able to perform in Durham has been a wonderful opportunity for a new audience to learn of their traditions.

This festival of East Asian Music has shown that East Asian as a label does not imply one style; even splitting into countries does not label separate homologous styles. The music we are used to, although it may seem like enough, is a tiny fraction of the music available in the world. What seems to be common to the performance of all the traditions represented here is the requirement of the artist to dedicate their life to music, to truthfully express something, and a requirement of the audience to listen with an open mind. This Musicon festival, supported by Durham University, Arts Council Korea, the Sasakawa Foundation, and Daiwa Anglo-Japanese Foundation, could not have happened without the work of a great many people and I for one am thankful for what they have done.