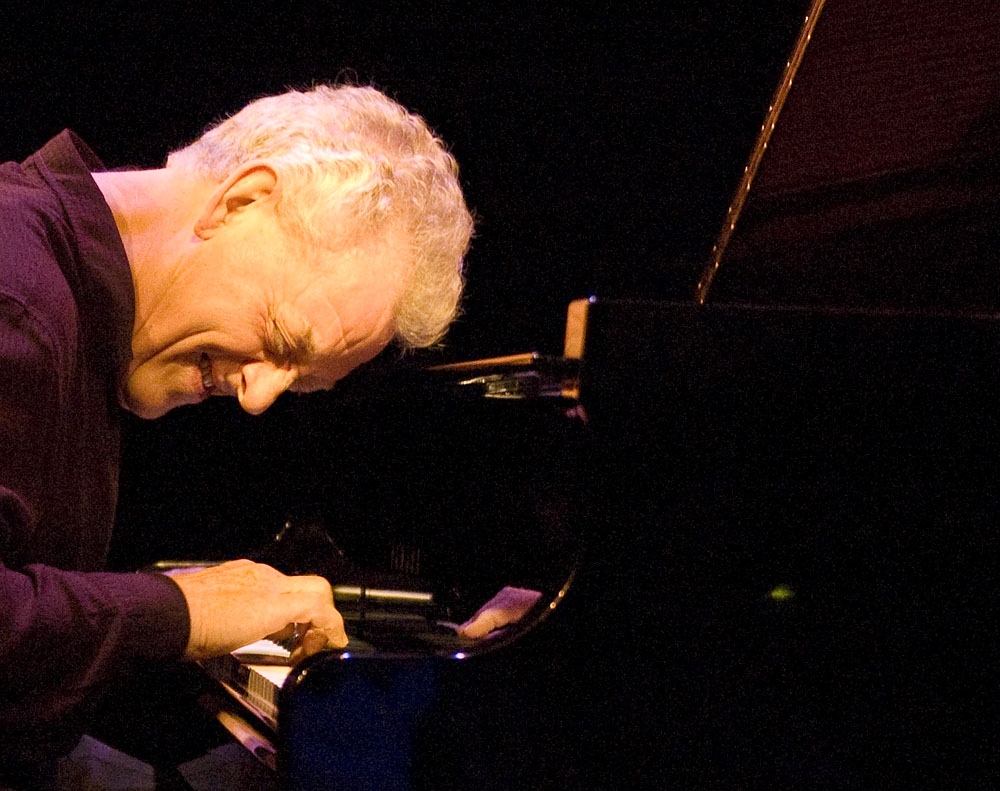 For three days the Quad in Chad’s was transformed into an intimate live music setting to host the second Musicon Jazz Festival. With ambient lighting and the bar open throughout, all that was missing was a layer of cigarette smoke for it to be a fully-fledged jazz club.

John Taylor is undoubtedly one of contemporary jazz’s greatest exponents, both in performing and composing, and this concert showed the kind of effortless expression and harmonic resource which has cemented his worthy reputation. Opening with a pair of originals, Taylor made the most of the subtle swing rhythms of Pure and Simple before moving onto the almost tango-like Between Moons, which had a spiky and percussive edge. A composition by the American bassist Steve Swallow next: Vaguely Asian, which was nothing short of amazing. Taylor utilised ‘under-the-lid’ techniques with precision and beauty – strumming the piano’s strings and using its frame to emulate the sounds of bass, guitar and drums.

Then, an imaginative re-imagination of the standard, How Deep is the Ocean? The audience was even treated to suitable sound effects from the plumbing lining the walls of the Quad. Taylor played another original, The Larder, which used sparse textures and fragmented ideas to create a very reflective atmosphere before closing the set with Ambleside. Taylor wrote this tune as part of a suite for friend and restaurateur, Derek Hook, as a tribute to that part of the Lake District. For me, this was occasionally reminiscent of Errol Garner with its thundering chords.

The second half opened with a Kenny Wheeler tune, Consolation. Taylor has been working with the trumpeter-composer since the ‘80s, and this piece is taking from their album ‘Music for Large & Small Ensembles’. Its slow, hymn-like introduction was complemented by the Cathedral’s bells and the tune gently rocked throughout, gaining in momentum and intensity before a fragile conclusion. A very impressionistic and unashamedly romantic reading of Spring is Here (Rodgers & Hart) next, which hinted at modal jazz, before Taylor’s tribute to a city which he knows very well: In Cologne. Having taught at the Köln Hochscule für Musik since the early ‘90s, this was a touching dedication to his memories of the city. Its dreamy and child-like opening led to some richly inventive harmonic writing (Bill Evans-esque), before picking up the pace and allowing Taylor to show off his agility.

Taylor really delved into the lush harmonies of Staffan Linton’s Liten Visa Till Karin – a magically lyrical performance – before returning to Kenny Wheeler for the popular Everybody’s Song But My Own. The introduction used thick voicings and created a real sense of melancholy, before relaxing and becoming much freer. The encore was Duke Ellington’s Reflections in D, a suitably introverted closing piece for this modest genius. A beautiful concert by a pianist who is showing no signs of slowing up as he approaches his 70th year.