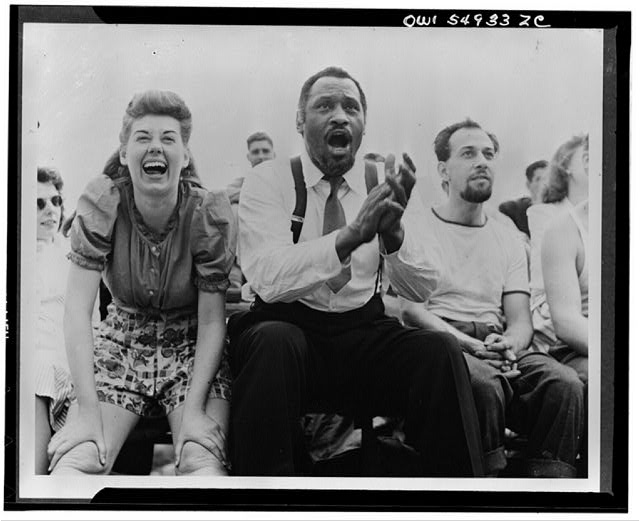 Robeson with his Othello co-stars Uta Hagen and Jose Ferrer

Again
the cities grieved
and silence was great,
hard
as a tombstone
upon a living heart,
as a dead hand
on a child’s voice.
Then
Paul Robeson,
You sang.

The words of Pablo Neruda in the Freedomways journal, late 1971. An actor, lawyer, athlete and activist – not to mention a singer blessed with a rich and resonant baritone voice – Paul Robeson was a rare black presence in the media spotlight during the second quarter of the twentieth century. The son of an emancipated slave, he rose above the overwhelming prejudice and injustice of Jim Crow America to become one of the era’s most popular performers of the concert hall and stage. It was, though, a career marked by tension between artistic integrity and political responsibility; a tension that would ultimately precipitate his demise as a public entertainer.

Robeson’s early career can be broadly defined as a renunciation of the political platform in favour of his work as an artist, both as vocalist and as dramatic actor. Despite being an erudite speaker, it was through the medium of song that he felt he could make the biggest difference in the plight against racial discrimination. In 1930, at the beginning of his decade-long stay in Britain, he told W. R. Titterton in an interview that:

“Man shall not live by bread alone, and what the farmer does I must do; I must feed the people with my songs… I would do all that I can to help [the Negroes] shed the last rags and tatters of old oppression. But I help them best of all by being an artist. It would be foolish, wrong, of me to be a propagandist and make speeches and write articles about what they call the Colour Question while I can sing”

Art meant hope – the elevation of humanity above the trough of subjugation. Robeson’s prime concern was with inequality and the struggle to re-establish a sense of historical identity among African Americans. To restore the Negro culture that had been ravaged, consumed and spat out over the centuries of servitude and colonial rule. To remember the names that had been overwritten, the ancestors forgotten, and all the links to an African past that had been so thoroughly severed. But the obliteration of the Negro roots and contemporary racial injustice became, for Robeson, intrinsically bound up with other issues that he encountered on his travels during the 1930s. By the middle of the decade, Robeson had made the connection between black freedom and the wider development of labour movements, developing a steadfast opposition to Europe’s burgeoning fascist regimes in the process. This exposure to different cultures, particularly that of Soviet Russia, served to appreciably awaken his political consciousness and endow Robeson with a more cogent socialist worldview.

The outbreak of the Spanish Civil War marked a significant turning point in the performer’s political vigour, as he became increasingly active in speaking at rallies and denouncing German and Italian aggression. As such Robeson was issuing a partial disavowal of his earlier insistence on the distinction between the artistic and political creature. In giving speeches and writing articles for socialist magazines, he was blurring the lines between the two apparently incompatible beings. As the Irish poet Tom Paulin, writing at the time of the Troubles, found; the artist has not only a right but also a duty to engage with the social climate of the time. In the way that, for Paulin, “the poet and rioter share an occult identity”, Robeson’s sensitivity to the plight of the oppressed rendered his entry into the political debate unavoidable. His choice had been made for him, whether he liked it or not. And so, just as Picasso’s Guernica had been described by its creator as “an instrument of war”, Robeson’s voice, too, had become a weapon in the ceaseless struggle for liberty:

“The challenge must be taken up. Fascism fights to destroy the culture which society has created; created through pain and suffering, through desperate toil, but with unconquerable will and lofty vision. Progressive and democratic mankind fight not alone to save this cultural heritage accumulated through the ages, but also fight today to prevent war of unimaginable atrocity from engulfing the world… The artist must take sides. He must elect to fight for freedom or slavery. I have made my choice. I had no alternative. The history of the capitalist era is characterized by the degradation of my people: despoiled of their lands, their culture destroyed, they are … denied equal protection of the law, and deprived of their rightful place in respect of their fellows… Not through blind faith or coercion, but conscious of my course, I take my place with you. I stand with you in unalterable support of the Government of Spain, duly and regularly chosen by its lawful sons and daughters.”

Despite his transformation into an overtly political artist, Robeson did still insist on keeping his musical concerts and political oratory separate. But although he refrained from making speeches at his concerts, the very nature of his material meant that these performances would effectively be rhetoric-free demonstrations. Songs of protest from the German resistance and hymns of solidarity from Republican Spain stood alongside Negro spirituals, all in front of a defiantly de-segregated audience. Far from being detrimental to his career, Robeson’s politicisation actually widened his audience during the early forties, and he found himself recording broadcasts for troops and performing at military bases and war bond rallies. As he advocated the government’s own antifascist stance, his popularity reached heights that black performers in America had rarely, if ever, attained.

Once the war was over, however, Robeson’s outspoken criticism of the lack of progress on civil rights issues under President Truman only managed to damage his reputation. His leftist radicalism and clamours for socialist union and solidarity between oppressed peoples now ran at odds, rather than parallel, with the official establishment line. With the rise of Senator Joe McCarthy, Robeson’s popular appeal plummeted and his role as a civil rights figurehead left him frozen out of mainstream culture. Even his wife Eslanda complained of Robeson’s “Moses complex” and its impact on his artistic career. Robeson’s retort that “Moses sure beats Uncle Tom” underlined his rebirth as an artist with an agenda. Unlike during the 1920s, Robeson was now unwilling to take on the caricatured theatrical roles that portrayed his black character as subservient or backward. The cause had begun to dominate the success, resulting in the very estrangement from the public realm that he had predicted in 1937:

“Today I am more than resigned to losing my individual status as an artist; I am happy and proud to be of some little use to my people.”

Indeed, Robeson’s criticism of U.S. imperialism and his affiliations with Communist Party leaders eventually led to the revocation of his passport in 1950, leaving him unable to travel beyond US borders. Like many left-wing performers, Robeson was called before the House Un-American Activities Committee in 1956 in order to incriminate other CPUSA members. His testimony not only highlights the level of concern the Eisenhower administration felt over the red threat, but also provides evidence of the immense racial prejudice that existed even at the highest levels of the American judiciary. However, international support did arrive in protest against Robeson’s travel restrictions, and a phone line connection was even set up in order to allow Robeson to sing to a London audience. His songs remained as necessary and as relevant as ever, and there still lingered the remnants of his old audience. As Tony Benn would later say: “You could take away his passport, but you couldn’t take away his voice.”

Nevertheless, the American networks and radio stations certainly tried, and Robeson found himself blocked off from reaching the mass audiences that the expansion of new media had created. NBC refused to allow him to give an interview on Eleanor Roosevelt’s embryonic television programme, whilst his records ceased to be distributed and sold. Driven by profit and under the shadow of J. Edgar Hoover, the media institutions did their best to block Robeson’s access to their viewers and listeners. Their apathy to civic issues meant that socially significant art remained marginal and unable to thrive – the very concern that Robeson himself had raised in regard to the English theatre over a decade earlier:

“The theatre is one of the organs of society. It will always be found that the vitality of the theatre is derived directly from the closeness of its connection to the society in which it operates. This premise is an obvious one, yet it is surprising how little it is recognized… No matter where you look you will find many painters, poets, dancers, singers, actors and writers convinced that they are a race apart, that their art is a question solely of the individual, that they give their wonderful gifts to the common herd because of the need for the artistic expression of their genius. The falsity of this dictum in the theatre is immediately obvious… English theatre appears to bear no relation whatsoever to your present society; the English people may have won part of their fight for democracy, but the theatre reflects the social relations of a feudalistic or liberal oligarchic society. The only problems which are presented in the English theatre now are those of a very tiny section of the English community.”

For Robeson, art was not meant to conform to a paternalistic notion of didactic elitism. His songs belonged to the people, not to the Leavisites. In this way he had more in common with the Leninist ideal of art as a tool for social unity. But Soviet cinema, for instance, had broadly failed to promote this cohesion, and even its most celebrated director, Sergei Eisenstein, had not succeeded in winning over his mass audience from the glamour and excitement of Hollywood imports. His works were innovative and expressionistic, but were the result of a top-down approach that separated him from his public. For, as Lunacharskii maintained, “boring agitation is counter-agitation”. Robeson, on the other hand, wasn’t seeking a new aesthetic, but revisiting the old and the already meaningful – infusing traditional songs from across the world with a new and pertinent vitality.

By the mid-1950s Robeson’s career had been finished by a political commitment that ran at odds with the establishment. With his prominence inextricably tied to his artistic success, he would gradually fade into obscurity, and like his African ancestors before him, be largely written out of the historical narrative.

Tayo Aluko’s critically acclaimed one-man show, Call Mr Robeson, seeks to help restore this forgotten character to life and features songs and speeches from the performer’s career. He can be seen tonight at Darlington Arts Centre at 8pm, and in a variety of other locations over the coming months. Further details can be found at http://cmr.tayoalukoandfriends.com/performances/