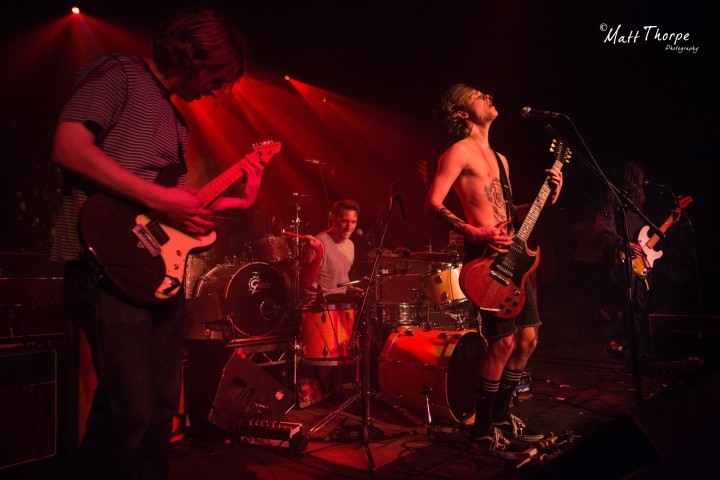 First to take to the stage at Cambridge’s premier live music venue (The Corn Exchange, whilst bigger, lacks the same beery-pissy-dodgy-club-night vibe) are local legends Bloody Knees. The crowd is understandably bigger at this early stage than it would be for an out of town support, and they give the 4-piece grunge-pop outfit a vociferous reception. In return they are granted with a new slice of their trademark distorted guitars x snarling vocals formula, with the dedicated hardcore’s wasting no time in starting the mosh pits in the centre of the crowd.

Second up is another new track. Whilst opening with a single new one would be an understandable decision, to go for two is bold, but Bloody Knees have the chops to just pull it off. That being said, it is a relief for the amiable atmosphere that recent single ‘Day Dream’ is wheeled out, to the majority of the crowd’s delight.

One issue throughout the set is the muddiness in the sound, particularly affecting the catchy lead guitar lines that are prevalent throughout their music. This is most noticeable on penultimate song and signature tune ‘Ears Eyes Ohs and Yous’- the track that broke them, and the one song that anyone who has heard of this band is likely to know. To that end, the loss of the main riff isn’t disastrous, as most just sing it along in their head, or even out loud, anyway. The anthemic yet melodic ‘whaoaoaoaoa’’s of the chorus, combined with the dramatically increased mosh pit, are the first of many roof lifting moments of the night. The refrain of last track Stitches (ironically written about an incident on BK’s last tour with Wolf Alice), “I’m covered in blood, but at least I’m having fun” is an apposite mantra for the boisterous and carefree crowd. No doubt some of those in attendance will be requiring stiches by the end.

As a final aside, it seem churlish to quibble over set lists when the band only get half an hour to perform but there was a feeling that the group did leave some sparkle out. ‘Luckless’ and ‘Bury Me’ would’ve been more dynamic cuts to include from the Stitches EP, as opposed to ‘Never Change’ and ‘Garbage Brain’. Further to this, the aforementioned ‘Ears eyes…’ was the single track from their debut release played, and stand-alone tunes ‘Bones’ and ‘Bed tomb’ were also avoided. It is totally reasonable that they wanted to try some new ones, and these were sounding promising, but still, in what is likely to be one of their biggest shows yet, a more longtime-fan friendly set would’ve been appreciated. On the flip-side, if they had played more recognisable songs, others may have bemoaned their lack of evolution. What’re you gonna do? Overall, a very enjoyable set, if not quite as incendiary as past performances in more intimate venues. 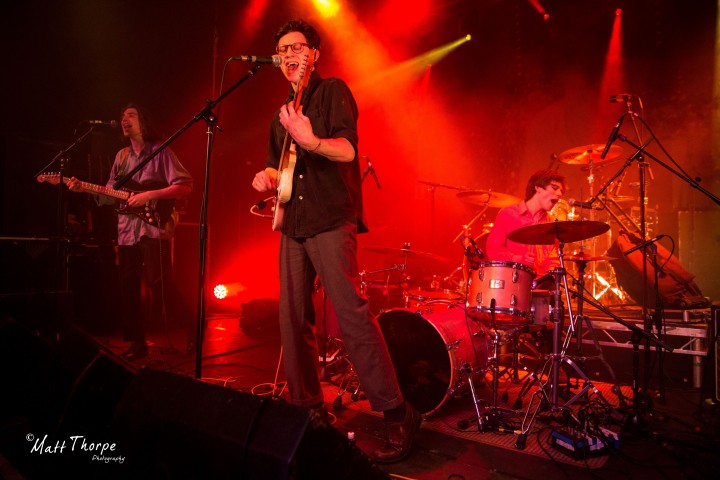 Much hyped Brighton four-piece are the second act to slide onto the Cambridge stage. Crisply and concisely cracking into their opening number, the first of many charming and effervescent retro-modern guitar indie tunes gets the capacity crowd dancing again. If Bloody Knees dealt in punky angst, The Magic Gang are all smiles and cheerful bouncing, much like the Weezer incarnation that appears in the Happy Days inspired video for ‘90s guitar-pop paragon ‘Buddy Holly’. Second up is the song that first brought the gangsters to the spotlight, ‘She Won’t Ghost’- again there is nothing complicated about this song, but the vintage production and pained way the vocalists sing it give it that extra lift. On vocalists, I’ll confess, having slacked on research, I thought they had just the one lead singer, owing to the almost imperceptible difference in the sound of the voices. Turns out, the three guys out the front of the stage are all capable of harmonising delectably, a highlight apparent throughout the set.

A girl behind me says “I know its cheesy… but I love a bit of cheese!”- this is perhaps not the description these guys are longing after, but it does however highlight one strong asset they, an ability to appeal to all sorts of music fan. To this end, there musical career, which is headed in only one direction at the moment, following being made track of the week on BBC Radio 1 Introducing, should show no sign of slowing. There is something extremely balanced about this band, from the subtle yet infectious sound, to the mirroring way the two guitarists stand next to each other on stage (one of them is a lefty!).

‘Jasmine’, played midway through the set, stands out as a stunningly well-crafted track, before the trio of crowd-pleasers (chiefly by virtue of actually being available on the internet) ‘Alright’, ‘Shallow’ and ‘No fun’ are dispatched towards the end of their time on stage. ‘No fun’, one of the best songs released so far in 2015, is in fact the set-closer, and an apt one at that. The cooler kids in the crowd already know all of the words to it, and it is by no means a stretch of the imagination to say that this tune could become a real festival favourite in no time at all. The Magic Gang’s set here is exactly the opposite to the title of their latest single, and its brilliant than in these austere times there is a band simply unafraid of just making things fun. 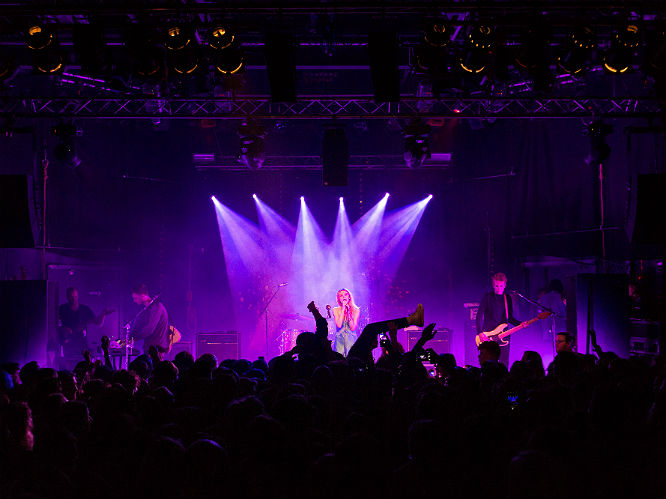 All that’s left now is for Wolf Alice to take to the stage. Walking on to the sound effects heavy intro track which seems all the rage these days, Wolf Alice do not mess about. Opening with old classic ‘Fluffy’ and plunging straight into the menacing and manic former single ‘She’ gets the entire capacity crowd bouncing. Ellie Rowsell’s vocals disconcertingly flit between sickly sweet and psychotic, but always hit the right spot for excitement. Wolf Alice are hyped to an almost debilitating extent, but from this performance it’s easy to see why. Each side they show off throughout the set, from the riff-tastic main-set closer ‘Giant Peach’, to the warm oldie (and new single!) ‘Bros’, the epic ballad ‘Blush’ and shoegazing ‘Storms’ is immaculately paced and performed.

The electricity and energy flowing between band and crowd is intense, and lead guitarist Joff seems sincere, when it could be seen as stale stage talk, as he proclaims ‘what a way to go out Cambridge!’- highlighting the fact this is the last night of their UK tour. The pleasant unassuming nature of the group, exemplified by their frontwoman’s shy/coy on stage presence, remains, but the nerves that gave a slight awkward edge to past performances is totally gone. No more are they the group opening their Glastonbury set by yelling “we’re so nervous!”- they walk on like they own the place. This is most apparent as they return to the stage for an encore- there is tangible excitement, as the crowd know exactly what they’re about to play. The soft opening strums of ‘Moaning Lisa Smile’ signal the loudest screams of the night, and as the main riff kicks in it is impossible not to pogo to the perfect arena rock rhythm. All 900 attendees collectively lose their shit, especially for the massive ‘AaAaAaAaAaAaAaAsss’ of the chorus. Once this, their final song, finishes, all that remains is the unshakeable feeling that you’re lucky to have caught one of the most exciting young groups in the country at a relatively intimate venue.

All three acts return to the stage for West End style bows with a rock-star edge- high fiving, hugging and back clapping are prominent. Tonight has been a great affirmation of the safety of the future of exciting live music in the UK.