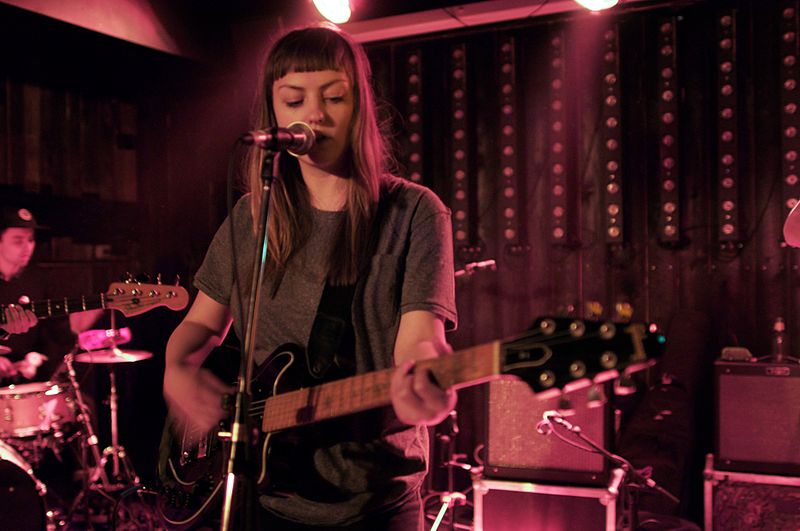 So I’d spent the day plodding around Newcastle with not much to do. Drank some spiced tea, watched a jellyfish float down the Tyne, and secretly listened to a band practice that sounded a lot like Smashing Pumpkins. Not a bad day at all. But I’d come to see Angel Olsen, a weird blend of American folk and pop, tinged with a country style voice. Having played with country singer Bonnie Prince Billie, and collaborated with the eccentric Tim Kinsella (Joan of Arc, Owls, Cap N Jazz), she’s decided to up sticks and follow her own sound.

But first up was Rodrigo Amarante, A Brazilian with a rich warm sound. Just add a crackle through the mix and it’s the perfect fireplace scene. He plays a guitar slightly shrunk and higher in pitch (still 6 strings!), singing softly and deeply with a classical folk style. That being if I can understand. He seemed to play songs in some Portugese, some French, some English. Through my lack of language skill I focus on the melodies, floaty and light against finger picked and raked chords… “He’s very green isn’t he?” my friend mutters. “Green shirt, green mic, green guitar…” Not only that, he’s lost in the music. It wasn’t till a bald bloke at the front introduced himself that Rodrigo remembered to introduce himself! Though I’m drawn in by his whispery style, the songs tend to mesh into each other. A nice sounding guy who plays nice folk for long winter nights.

Then comes on Angel and her band, straight into her new album, Burn Your Witnesses. They all look a bit grumpy, not a single smile, or even glimpse at the audience as they rattle through the first few songs. There’s two guitars, both heavy on phaser, raw and sharp like Mac DeMarco. Angel has that classic country wobble on her voice, a tone my friend called “that warm apple-pie voice, something from a simpler time”. Maybe he has a point, the melodies really capture the audience. But from a simpler time she looks so… sharp. Her back’s turned as she starts the songs, and even though her guitar cable looks coiled to a huge reach, she barely moves from her spot.

This seems to affect the audience. Silently focussed, they look tense, arms crossed tightly as she played. But when she finished, they’re explosive in their applause and cheers. Maybe she just needed to warm up. After about 6 or 7 songs she finally pauses to speak into the mic. “I’m just happy for [the band] to have me on their stage”.

From here they play a few faster songs, the single “Forgiven/Forgotten” which hides the vocals slightly but gets the audience nodding. She whimpers into the mic for a haunting effect on “Unfucktheworld”, and her lyrics are earthly yet chilling. Her eyes are so quietly intense, her gaze angry and very sensual. Even though familiar chords begin to blur the songs, she’s definitely warmed the hearts of the crowd.

The band rush off stage, and she plays an intimate encore: “It’s hard to play this when you’re feeling happy. I still get nervous every day.” The crowd leans in to the first words to a moody chord… “Everything is tragic.” And they gush out with laughter. And then she smiles, breaking into “White Fire”, a slow and mesmerising folk story. She then rushes off the stage, almost blushing. The bassist stands near the bar as we walk out, blended into the crowd, which kind of sums up the evening. Though she doesn’t make the biggest of impressions, there’s definitely more to Angel Olsen than meets the eye.