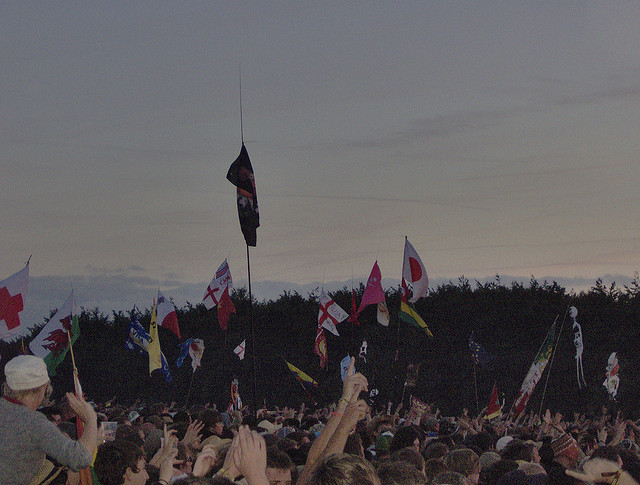 Perhaps it was due to the rapid maturing of our generation, or maybe the undeniably stagnant state of rock music; whatever the reason, the release of this year’s Leeds Festival line-up was instantly deemed underwhelming by a very vocal bunch. They may have had a point. Segments of the Main Stage schedule read like a typical NME Tent listing; much of the NME Tent read like the Festival Republic Stage, and so on. Confounding the misery was a set of headliners committing a trio of cardinal sins: “not big enough”, “past it”, and “being Eminem” respectively. As such, Leeds was decidedly not the place to be on August bank holiday weekend. Those staying at home were relieved of the annual pang of jealousy, while friends going to Creamfields were cooed at with far greater envy than their grubby, NME-reading counterparts.

In short, this year’s Leeds needed to be a cracker, and Friday lived up to its end of the bargain in spades. Hadouken! were the first act to truly spark the Main Stage crowd into life, proving that their dip in popularity has done nothing to dampen their raucous live capability. Material from newest album Every Weekend was well received, although the greatest energy was of course reserved for ‘That Boy, That Girl’. Californian sisters Haim impressed in the NME Tent with their dreamlike, folky sound, reminiscent of Fleetwood Mac and Black Kids in equal measure, while Fall Out Boy delivered only an average set, general consensus being that not enough songs from beloved breakthrough album ‘From Under The Cork Tree’ were included. Their hits went down very well, though, a sentiment which can be applied tenfold to the currently massive Disclosure. To focus particularly on one song is perhaps an injustice to the pair, as their whole set really was a triumph, but the energy generated by ‘White Noise’ was nothing short of astounding.

The rounding-off of a largely fantastic day was tasked to Biffy Clyro, a band questioned by many as not being ready for a headline spot. That notion was put firmly to bed by the Kilmarnock trio, whose versatile arsenal of rocky bangers and slow sing-alongs elevated them beyond the loftiest of expectations. It is fitting (and a shade hopeful) to assume that a very excited Radio 1 caller’s nicknaming of the band as “Biffy Pyro” was a reference to the raw power of their set, rather than the actual fireworks sent spewing from the top of the main stage.

As always at Leeds, everybody’s optimism was quite literally dampened on Saturday by relentless rainfall. It resulted in a great many Saturday afternoon acts receiving reduced audiences, especially those on the washed-out Main Stage (although who would really have enjoyed inexplicable mainstays Bring Me The Horizon and Deftones anyway?). Bastille benefitted both from playing in a tent and possessing two of 2013’s biggest tracks in ‘Flaws’ and ‘Pompeii’, and duly delivered a wonderful set. Slightly less radio-friendly veterans System Of A Down utterly tore into the Main Stage, reminding everybody that beneath their anger and oddity lies a bedrock of incredibly accomplished musicianship.

Finally, as the sun dimmed over a shortened washout of a day, rabidly anticipated headliners Green Day roared onto the stage…and proceeded to disappoint. The first few songs were barely-known cuts from recent underwhelming triple-album iUno!, iDos!, iTre! and seemed to utterly deflate the crowd. Then the Dookie album cover was raised slowly behind the flagging trio. “We’re going to play the whole thing, front to back.” explained Billie Joe Armstrong nonchalantly. From that moment the hits were relentless, each serving as a timely reminder of Green Day’s pedigree. Even after ‘Dookie’ they kept coming, all topped off by the heartwrenching ‘Good Riddance’. Show saved, band redeemed. They even stopped the rain.

Sunday was kicked off in decidedly less epic fashion by Welsh hardcore outfit The Blackout, whose enthusiasm outstripped their ability by a fair margin. It was down to Earlwolf – Tyler, The Creator and Earl Sweatshirt from controversial hip-hop outfit Odd Future – to shock the crowd into life. Their flagrantly offensive, often disgusting lyrics did enough to draw attention to an unquestionable rapping ability. Next, an oversized crowd shifted with single-minded intent to the Festival Republic Stage to see ‘Chocolate’…sorry, The 1975. To their credit, the band delivered an excellent performance which should prove them to be anything but one-hit-wonders. Foals lived up to their fantastic live credentials back at the Main Stage, their tracks shimmering with reverb and indie cool. Chase and Status were less impressive. Although their set possessed an undeniable energy it was sadly lacking in innovation, resulting in a performance which amounted to little more than piping the act’s Spotify page through incredibly loud speakers.

It was down to Eminem to complete the hat-trick of fantastic headliners, no mean feat amidst allegations of miming at Reading the previous day. Judging by this performance, he wasn’t; he was merely using the benefit of an overpowering backing vocal track, something which sadly diluted many of the otherwise mammoth tracks performed. For every negative, however, there seemed a redeeming factor. Bringing out surprise guest Dido to sing ‘Stan’ was a masterstroke, for example. The overall performance was solidified as good – although not to the standard of Biffy and Green Day – by a raucously received encore of ‘Lose Yourself’, and a happy crowd departed to continue the party at one of the many campsite DJ stages.

Eminem’s headline slot can be seen as a microcosm of the festival as a whole, both events which threatened to disappoint but largely came good in the end. More than ever, this was a festival of proving doubters wrong. Biffy Clyro proved themselves more than worthy of a headline slot, while Green Day made us feel foolish for believing their live abilities to be waning. Nobody who attended one of the more star-studded line-ups in recent memory (such as 2009 or 2010) could argue that this was their favourite Leeds Festival, but it was certainly worlds ahead of the disaster predicted by many.