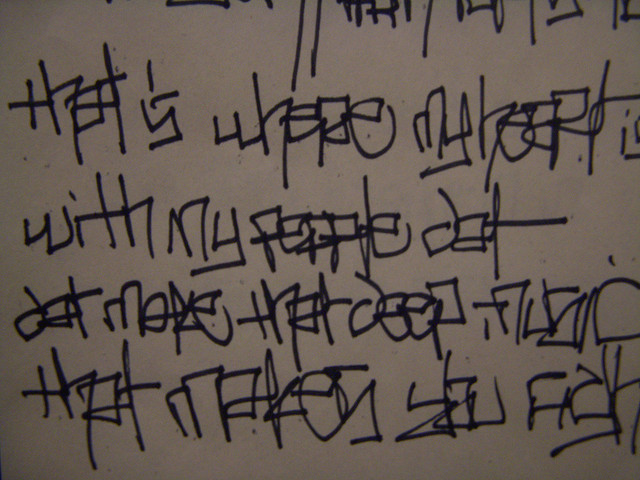 Hip-hop, more than any other genre of music, has developed into a medium of its own, that terms such as poetry and music cannot comprehensively capture. As an art form, it is still very much in its infancy, but has grown at an astonishing speed since its beginnings in the sixties and seventies. Today, it has dominated mainstream pop music, with its influence in many instances if not its actual presence, and created a culture and rich history that is obsessively followed by millions. Yet, despite this and the huge amount of discussion and debate on hip-hop, we still struggle to come to terms with it and find a way to understand what it means. The only other artistic medium in a similar position is comic books, which are still largely identified with a single genre, (superheroes for comics and gangsta rap for hip-hop), and formed through a combination of two components to produce something new. In comics, this is the blending of illustration and text, whereas for hip-hop its the mix of poetry and music, but commentators on both are still struggling to discuss the mediums without focusing on one component and neglecting the other.

Part of the problem lies in the reasons behind hip-hop’s success and popularity, which is usually centered on the cultural image or music. The ‘hip-pop’ songs, which are seen as the mainstream examples of hip-hop, largely consist only of the image and the music. The words component, essential to hip-hop, is neglected to the point of filling in the gaps between the chorus or hook. So, what most people see as hip-hop or think of as hip-hop is more an off-shoot of the thing itself.

Eminem in particular, ideally placed having experienced hip-hop both as an underground and mainstream rapper, often comments on this. At the far end of his career, in the opening track of Recovery, he seems to have resigned himself to mocking just how little attention most of the words will receive: “Shorty dance while I diss you to the beat, **** the words / You don’t listen to them anyway.” Earlier in his career, the tone is much more sincere. The 2002 album, The Eminem Show, opens with the appeal “I want everybody to listen to the words in this song.” Kendrick Lamar, a young, new rapper, made a similar plea at a recent Newcastle gig for the audience to “pay attention to the words”, as reported for The Bubble by Oliver White. This might not sound like an important point, but imagine a novel opening with an author’s note, pointing out that we should read the text. This is the position hip-hop is in with the majority of its listeners, and it has not changed in over a decade.Nonetheless, even if they are in the minority, there are plenty of people paying a lot of attention to the words of hip-hop. The best way there seems to be at the moment of talking about it accurately, is to treat it like poetry. This is the position Jay-Z takes in discussing his book Decoded, which dissects rap lyrics and their history, on the Letterman show. However, we can surely only mean this in a figurative, complimentary sense, about the words’ lyricism, complexity and depth of meaning. Jay-Z is not a poet in the sense that T.S. Eliot is a poet, simply because they are working in two different mediums.

Poetry is static, and exists purely on the page. While we may have poetry readings, it is still written to be read on the page and we lose nothing in experiencing it this way. Rap, on the other hand, is written to be rapped and be part of a hip-hop track. It demands constant momentum. We lose many crucial aspects of it if we restrict it to the page, such as vocal delivery, accents and character acting to name a few. Not to mention that the music is a necessary part of the overall hip-hop track, rather than one we can ignore. Jay-Z’s ‘Dead Presidents II’ needs the melancholy beat, creating a world weary tone of wisdom learnt through suffering, to give the lyrics their full power.

In this way, hip-hop is more comparable to drama than poetry. In drama as well, we effectively have to kill it in order to study it. We dissect and read the play script as a substitute for seeing the intended live performance, just as we have to confine rap’s lyrics to the page, rather than hear the intended song. Both mediums exist purely in the moment, and we lose their essence when we have to try and freeze them so we can study their art.

The question of its being art remains another controversy and obstacle to understanding hip-hop as a medium. However, many of the criticisms given are ones people happily ignore in the context of literature. It would be impossible to discuss them all here, but a common complaint is disgust or simply apathy towards a rapper’s work. This is then used as an excuse to dismiss hip-hop as a whole because of one or a few artists. Such an attitude is reserved solely for hip-hop, however. The most outraged or disgusted reader of Fifty Shades of Grey would not throw away all the rest of their novels in protest (although they may have thrown out E.L. James’). Moreover, if we are to dismiss hip-hop on accusations of homophobia or misogyny, then we will have to dismiss much of literature as well.As a point of comparison, the poetry of John Donne provides some of the best reasons for considering hip-hop alongside literature. Donne’s preoccupations as a poet match many of the elements that rappers are obsessed with. Use of wordplay, creating a smoothly flowing rhythm, exploring masculinity and sexuality, creating compelling first person voices and even instances of punning on his own name are all present in Donne, and much of rap. Donne’s ‘The Flea’, with its creation of a self-obsessed, sexually threatening masculine voice, could even be said to have found a modern day successor in Tyler the Creator’s ‘She’, albeit a much more overtly dark and intimidating one.

Yet, for all the problems hip-hop is facing in recognition, and in being discussed and defined by those who do recognise it, it is important to repeat that it is a baby compared to other mediums, like the novel or play and even comic books. The unique position it holds now is of being old enough to have a complex history and traditions, but also young enough to still not be definitively formed. The development alone, from a hip-hop group like N.W.A at the start of the nineties, to a group like Odd Future today, is massive and incredibly exciting. The speed at which it moves looks only set to increase, with more alternative areas of hip-hop being paid greater attention as the mainstream gangsta rap image becomes increasingly stale and less popular. In a sense, this cycle has already happened before, with groups like Black Star reacting against the violence of the West Coast/East Coast feud of the nineties. However, there is definitely a greater taste for new directions now, and alternative acts like Kid Cudi, and indeed Odd Future, are probably going to be brought much more into the mainstream. But, whatever the future will hold for hip-hop, it is a fascinating prospect. The last question we should be asking is whether it’s worth paying attention.