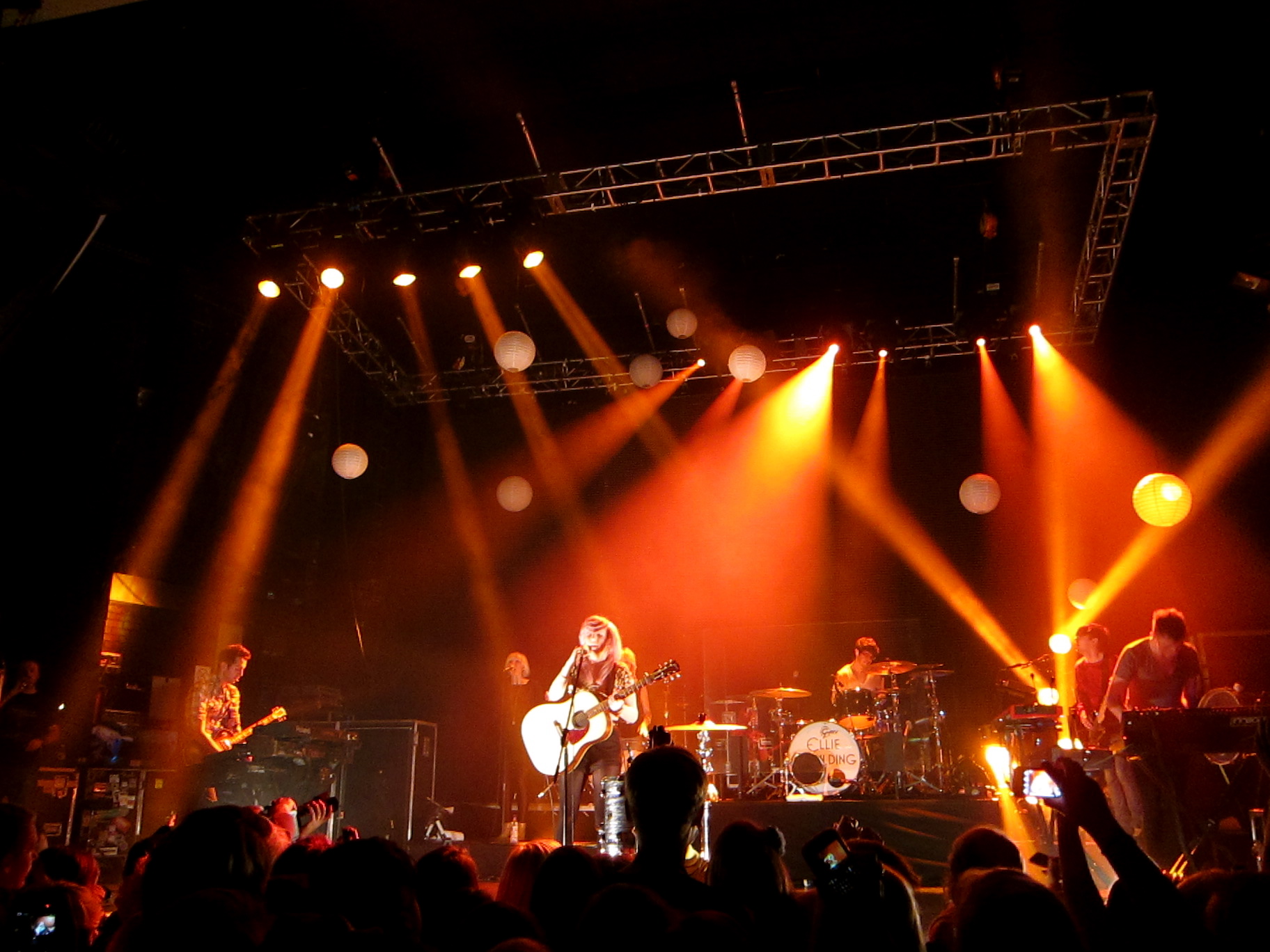 In December 2009, the BBC released its Sound of 2010 list featuring the most promising musical talents for the year to come. Eleven months on, the artist who topped that list, Ellie Goulding, is cementing her hard-earned place as one of the most exciting British artists following her meteoric rise to fame. After performing at various festivals over the summer, including Glastonbury, V and Bestival, she shows no sign of slowing down as she embarks on her second UK tour of the year.

When the Lights tour kicked off at Newcastle’s O2 Academy on 28th October, the anticipation and excitement were palpable from the moment I set eyes on the queue forming outside the venue. Doors were set to open at 7.00pm, yet by 5.30pm, about 50 die-hard fans were already huddled together out in the cold, reading magazines and wrapped in a blanket emblazoned with “WE LOVE ELLIE GOULDING”. When I joined the queue at 6.30pm, it was already snaking its way around the entire block. So there I was, shivering and taking baby steps towards the front doors with a hundred other people, unable to even imagine how the 14-year-olds in front of me were coping with the cold, in their denim miniskirts and excessively tight tank tops. Let alone how their parents let them out of the house dressed like that.

Once inside, the usual concert routine began. Check coats in at the cloakroom, enter the huge hall and push your way past people (enduring verbal abuse for doing so) to get as close as possible to the stage and try to enjoy the supporting acts. Only after all those compulsory steps were completed could I finally focus on my expectations for the show. Was Ellie Goulding, Britain’s musical hope for 2010, going to deliver? Was she any good live? Which songs would she open and close the show with?

A huge cascade of lights – a reference to the tour’s name – served as a backdrop and lit up with the instantly recognisable opening drumbeats of Goulding’s first hit, “Under The Sheets“. With all the band members shrouded in obscurity, it would only be a matter of seconds before Goulding would come bouncing out on stage to launch into the song, right? Wrong. Instead, she discreetly emerged from behind one of the drum kits where she’d been contributing to the song’s intro for about a minute, virtually unnoticed. Within the first moments of opening her tour, she had already set the tone for the show by establishing herself to the audience as a multi-talented but humble artist, full of surprises.

Throughout the evening, she took the time to introduce all her band members and backing vocalists to the audience, a sign that she acknowledges and appreciates the way that they have lent their talents to hers in order to produce that unique “folktronic” sound. Goulding’s admirable attitude towards her newfound fame shone through in a short interlude in which she expressed her gratitude to her fans. Then came the acoustic set…

The subsequent 20 minutes were an absolute treat for both loyal fans and people who have just been introduced to Goulding’s music. In addition to two covers – Midlake’s “Roscoe” and the hauntingly beautiful “Sweet Disposition” by The Temper Trap – she performed “The End”, a song that doesn’t figure on Lights, her debut album, as well as an acoustic version of “Wish I Stayed“. The intimate comfort of the acoustic set, created partly by the brutally personal nature of her lyrics, transcended the fact that the concert was sold out and that the audience mainly comprised of overexcited, squealing teenage girls in their GCSE years. But, armed with an acoustic guitar and her breathy voice, Goulding possesses that ultimate skill of knowing exactly how to connect with every member of the public.

Still under the spell of her acoustic set, the audience was jolted back to life when lights flashed in the background in time with the introduction of “The Writer“, the fourth single from Lights. In this final segment of the show, Goulding once again surprised us by announcing an exclusive rendition of “Human”, a song she’d never performed before and that is set to feature on Bright Lights, a re-release of her debut album due out on 29th November. Closing with undoubtedly her biggest hit yet, “Starry Eyed“, Goulding took to the drums again and gave it her all, while the crowd sang along with her, hoping that the show would never end.

One of the things that made the tour’s opening night so special was the amount of surprises Goulding had in store for her audience. It doesn’t get much better than hearing a brand new song being performed for the first time. However, as I was retrieving my coat from the cloakroom, I realised that what stood out for me was Ellie Goulding’s close relationship with her band and, most importantly, with her fans. It is clear that fame has not gone straight to her head, and she credits her fans with keeping her grounded. Now we can only wish that her talent and charming personality will carry her through the rest of the Lights tour and into 2011 with the hopes of producing another mesmerising album.