From New York to Durham: views on busking 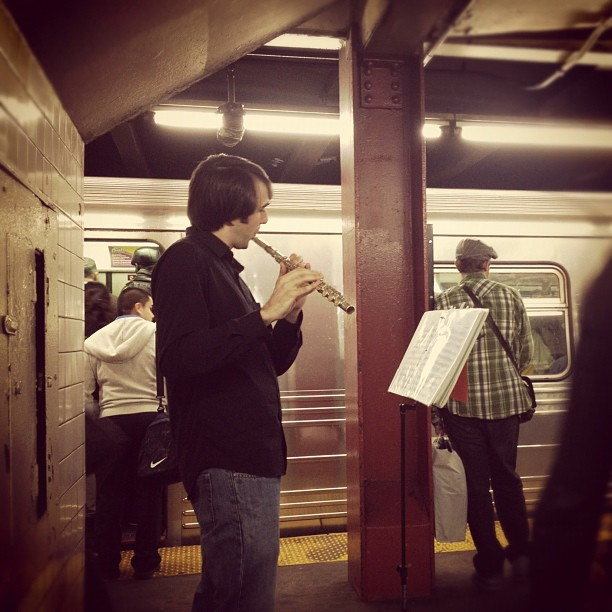 Busking on the New York subway

Until recently, I must admit that I hadn’t given the profession of busking much thought. However, experiencing the wealth of buskers on the New York subway during a trip to the USA last month really made me stop and consider this form of music-making more carefully.

What struck me most in New York was the sheer diversity of the buskers’ musical styles and genres, reflecting the multi-culturalism of the city. Particularly memorable were two elderly Chinese men, one at Belvedere Castle in Central Park and one in Times Square subway station, playing traditional Chinese music on what I believe was a gijik, a bowed stringed instrument played in a manner similar to a cello, but much daintier in construction and possessing of a curious spherical sound-box. It was rather warming to hear these men using the traditional instruments of their homeland.

Another memorable experience was the black man playing a set of African drums on the subway platform. His infectious energy had drawn a semicircle of onlookers around him, with a young black boy standing slightly forward from the rest, completely enthralled. Call me idealistic, but in those few minutes it was as if the drummer had mesmerised the boy and transported him back to his African roots. I was touched.

In total contrast were the two violinists – one black and one white boy, probably aged about thirteen – playing a rendition of Mozart’s Eine Kleine Nachtmusik. Admittedly it sounded a little rushed and nervous, but there’s no way I could have busked in a busy subway station at that age! They were clearly serious about their music, as was the black lady singing soul-inspired numbers. She was in fact using busking as an opportunity to promote her CDs, and this has become more and more prevalent in recent years. Up and coming artists busk not only in order to earn some extra cash, but also to showcase and promote their talent.

I imagine, too, that busking is a fantastic way of building confidence and overcoming performance ‘barriers’. I remember watching a BBC programme called Classical Star a few years ago, in which classically trained student musicians competed to win a top recording contract. One of their tasks was to busk in a busy London shopping centre, which threw many of the competitors far outside of their comfort zone. But by the end of the session, their confidence had grown in bounds. Indeed, it seems that the public are usually appreciative of talented student buskers. Last year a colleague of mine said that he earned far more per hour by playing the violin in Market Square than by working at his college bar, for instance.

Inevitably, though, not all busking induces positive reactions. It would seem that the Eastern European men who play the accordion on Framwellgate Bridge don’t exactly have a huge fan club, and an article in The Northern Echo revealed that a group of Romanian accordion players, hailing from Newcastle, who “play a tuneless version of ‘When the saints go marching in’ for eight hours a day” (Ring any bells?) have been causing great disturbance in Richmond, North Yorkshire – to the extent that the town was thinking of making the buskers “audition” before they were allowed back on to the streets. I don’t think the Durham accordionists are quite that awful, but when busking reaches a level of unpleasantness warranting a public outcry, I agree that something should be done about it!

On the whole, my preconceptions about buskers have vastly changed in the past month. Take, for instance, the pop/opera guy who sings power ballads in Durham’s Market Square: he has always irritated me, simply because I personally dislike his singing style and choice of music (‘You raise me up’ being a particular pet-hate). However, an article in The Journal informs me that this young man – nicknamed “the Voice of Durham” – was using his busking savings to fund a charity single for The Children’s Heart Unit at the Freeman Hospital in Newcastle. So, in fact, he is a real asset to the local area, and I take back my disparaging view.

And then there’s the old man who plays the recorder on a regular basis in Saddler Street and the town centre. Judging by his appearance, I presumed he was another Eastern European, but having plucked up the courage to go and speak to him the other day, it transpires he’s from Tyneside. He told me that he’s played the recorder since the age of ten, and also plays the Northumbrian pipes (on Framwellgate Bridge every so often, I believe). He plays Northumbrian and Scottish folk music, and I think it’s fantastic that he’s keeping this local, traditional music alive. When I asked him if he played every day, he replied, “not every day, but when needs must”. I’ve got to admit that I have respect for this guy. I’ve seen him playing in all manner of weather conditions – in the freezing cold late at night, in the heavy rain – and nothing seems to put him off. His intonation is always crisp and clear, and he never hits a bum note. Equally, I have respect for the guys who were busking right down on the hot, stuffy, airless platforms of the New York subway. One evening there was a trumpeter belting out some solo jazz, and I just don’t know how he did it in that airless atmosphere. To me, this implies that there is a real need on the part of these buskers – they are prepared to play in such horrible conditions because they really do need the cash.

So the next time you come across a busker, I entreat you to think before walking on by. People busk for a reason, and normally it’s a genuine, worthy one.