Encounters during “The Republic of Heaven” 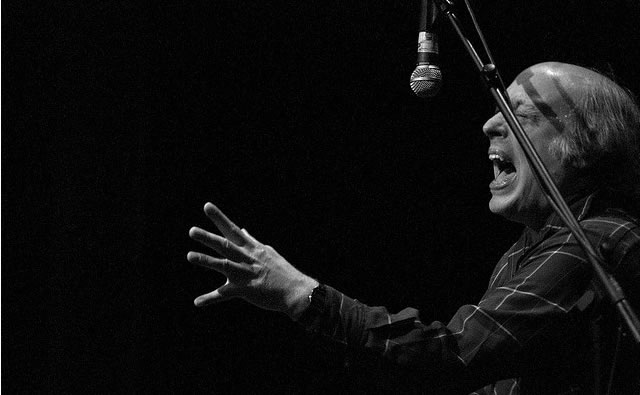 For most people, the name Trevor Wishart unfortunately does not really mean anything. Readers may be interested to know that he is one of the leading lights in electroacoustic composition, and was Composer-in-Residence here at Durham from 2006 to 2009. Granted, his field of specialism is nothing like mainstream; but for those in the know, Dr Wishart is one of the pioneers of electroacoustic music, and some would say the finest “sonic arts” composer around today.

And so on 4th May, a group of dedicated first-year music students set out to find out what all the fuss was about. The premiere was taking place at The Sage Gateshead, one of the North East’s most striking venues, and consisted of a piece made up entirely of human speech. The pre-concert talk introduced us to some of Dr Wishart’s ideas and methods, as well as the concept of the piece; he had spent a long time recording different dialects and speech patterns in and around the region, before weaving them into a four-movement tapestry of sound – broadcast in eight-channel surround sound. Encounters in the Republic of Heaven is the result of years of recording and manipulation, and Dr Wishart even built and programmed his own computer software to ensure that the simulated speech sounds were as natural as possible.

Sounds all well and good, but I still didn’t really know what we were in for. As we ventured into the Northern Rock Foundation Hall we found eight speakers arranged in a circle around a cluster of chairs, and the lights began to dim. We were encouraged to close our eyes to fully experience the “cinema of sound”, but this phrase falls short of conveying the sheer beauty of the soundscape which we were about to witness. The piece consists of four acts, each around 20 minutes in length, made up of sections of synthesised and real human voice sounds interspersed with “portraits” – where the audience’s attention is focused onto a single voice, telling a short story.

The overall effect was breathtaking, as we were enveloped in “clouds” of speech. Some of the sections emphasised the different rhythms of speech; others exaggerated the contours of the North East accent; others were arranged to form harmonies and were transformed into song. The gentleman next to me was so moved that he felt compelled to touch my leg; but, as with Bennett’s character Hector, I felt the grope was more “benedictory” than exploratory. So I tried not to let it spoil my enjoyment of the music.

Unwelcome physical contact aside, we all thoroughly enjoyed the evening. Some of the effects achieved were truly magical, and the portraits each offered a brief but fascinating conte – some anecdotal and amusing, others really very moving. I’m sure Dr Wishart prefers to think of his magnum opus solely in terms of sound, but for me it worked as a cinematic work of art and a stunning piece of poetry.

Trevor Wishart’s Encounters in the Republic of Heaven is being performed on 16th May in London, before embarking on a world tour. See www.trevorwishart.co.uk for more details.