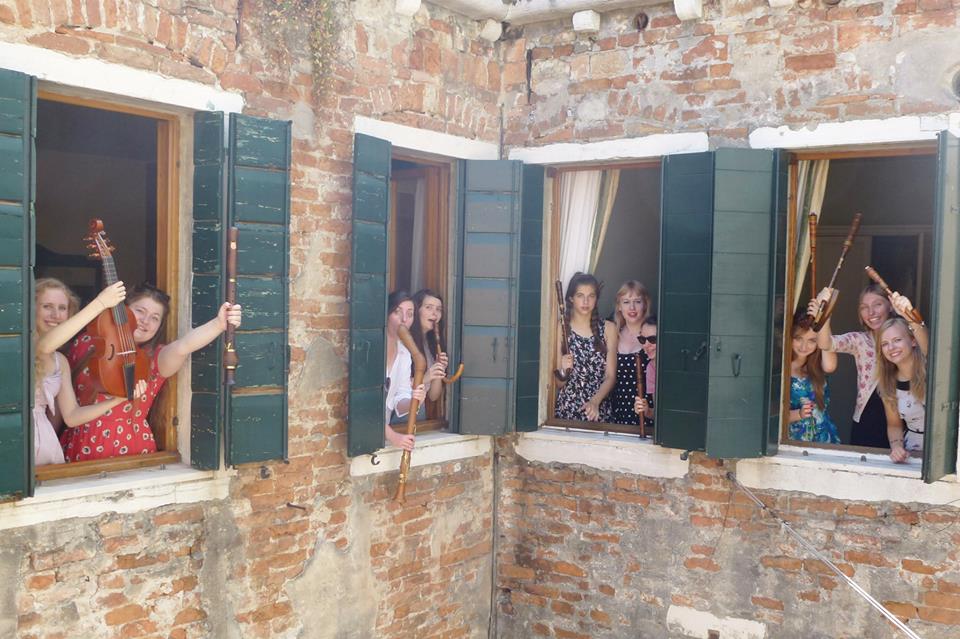 Let’s face it, for most of us, the mention of recorders instantly unearths fond Primary School memories of squeaking, plastic renditions of ‘Twinkle Twinkle Little Star’. It is easy to forget that recorders really hail from a rich era of musical sounds a world apart from ‘Hot Cross Buns’. I am, of course, talking about the Renaissance. A time of re-birth and re-vitalisation, an atmosphere charged with sparks of artistic fervour and finesse. And what place on earth embodies and harks back to this atmosphere more than Venice, the city of love. This is why I and the rest of Warwickshire Youth Waits embarked on an exciting tour, earlier this summer, to this heartland of the Renaissance.

Warwickshire Youth Waits is a well-established group which offers young musicians the rare opportunity of playing the energetic music of the Renaissance Band repertoire. Warwickshire is one of the only counties across the country to prioritise Early Music amongst young people, hosting Warwickshire Early Music Academy (WEMA) which helps to co-ordinate and develop performance opportunities for Early Music across the county. In other words, Warwickshire likes to be in touch with its Shakespearean roots! The group is run by Alison Kinder, a professional viol player, who incidentally helps tutor on Norvis, the early music summer school held annually in Durham.

I’m pretty sure my Granny still thinks I go off to do weightlifting every other Sunday afternoon, but actually ‘Waits’ is an old Tudor name for a group of musicians. Waits were town musicians in the medieval and Renaissance period who performed at civic occasions, welcoming official guests to the town and playing on festival days. If you want to go and see some Waits in action, the tradition is alive and kicking down the road from Durham, in York, who still have their own Waits. In fact, we joined them a couple of years ago in providing music for the York Mystery Plays. The plays, now held every four years, are a revival of a medieval tradition in York, in which the various Guilds of the city would perform a series of pageants on waggons, covering the biblical narrative from Creation to the Last Judgement. Warwickshire Youth Waits has also played at Southwark Cathedral, the Lord Leycester Hospital, Warwick Castle, Canons Ashby, Sir Francis Drake’s famous ship, the Golden Hinde, the International Early Music Festival at Greenwich and at the finals of the National Festival of Music for Youth.

The group is currently made up of 11 students, ranging from 13 -21 who have great fun playing the county’s wide ranging collection of wonderful, if slightly wacky instruments, which includes viols, renaissance recorders, crumhorns, shawms, and a rebec, with the odd gems horn thrown in for good measure. Don’t ask me what a gems creature is. It is the source of much debate, but is safely guaranteed to make you feel like Robin Hood. The entertaining thing about Waits is that, very often, you find yourself playing about 3 instruments per piece (and maybe singing!) on various lines and in various clefs… and probably up an octave, with an extra finger added if you happen to be on the light wood treble recorder and playing a B flat! I have one distant memory of a concert in which I was forced to play the tambourine with my foot – the result of being short of a few hands.

Getting these instruments through customs on their way to Venice was an even more interesting experience. Let’s just say, it wasn’t ordinary hand luggage. However, the perks of the pilot just happening to be the Dad of a member of our party did ensure the Crumhorns enjoyed a safe flight in the cockpit!

Our concert programme for Venice juxtaposed the English music of composers such as Byrd and Dowland with Venetian composers Monteverdi and Gabrieli. We were lucky enough to have the opportunity to perform our first concert in Chiesa Scuola Grande di San Rocco, the church where Gabrieli himself performed and worked. It was just incredible to play and sing Gabrieli in so fitting a setting, gazing up at the choir galleries and guilt viols surrounding the magnificent organ. We went on to play in St George’s Anglican Church, Chiesa dell’Angelo San Raffaele, and finally, Santa Maria Dei Carmini. We also entertained unsuspecting tourists outside our apartment which happened to be next to the famous Palazzo Contarini del Bovolo, a small 15th century palace which is best known for the external spiral staircase.

But many ice-creams, concerts, bridges, glass shops and pizzas later, I felt I discovered the true significance of our trip, when we attended a Vivaldi Four Seasons concert given by the absolutely stunning string group Interpreti Veneziani. As the concert programme remarked, “the material structure of architecture and painting allowed them to stand up to the passage of time, but music, made of vibration, vanished into the air, deserting Venice for an unknown destination.” Suddenly I felt great solidarity with these Venetian musicians in our attempt to “bring harmony, new and old in one and the same time, back to the splendid venues which have remained, to revive the sound of some of the most prestigious instruments, true works of art, in settings charged with history and beauty.”