Silent Alarm is certainly one of my favourite albums ever released, easily holding a place in my top 10. Since listening to ‘Positive Tension’ I have grown to anticipate all of Bloc Party’s releases as I did with Hymns, particularly in light of the recent line-up change. As a drummer I held Matt Tong, their former drummer, in high esteem, and invoked his demeanour into my playing admittedly a bit too much. Gordon Moakes also left the band and the pair were replaced with Menomena instrumentalist Justin Harris and drummer Louise Bartle. 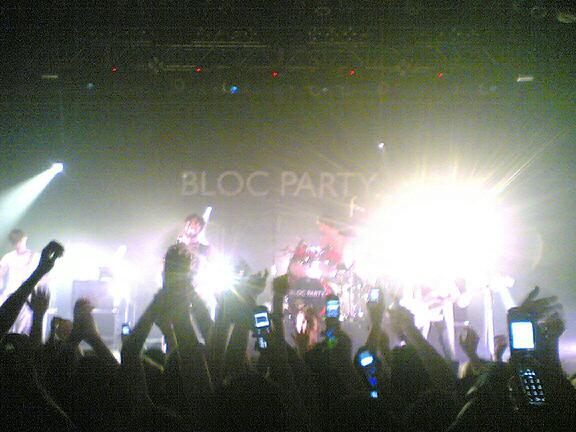 A lot of Bloc Party fans within my social circle had somewhat given up on them prior to Four or even Intimacy. I can honestly say that I have loved all of their albums, however when I first heard ‘The Love Within’ I came to the quick realisation that such a statement may not exist past the 29th of January.

If my memory serves me well, I would be right in saying that ‘The Love Within’ was released into the public domain during Fresher’s week, as I distinctively remember being quite marvelled. Abysmal was the first word that came to my mind upon hearing the track, it sounded as if Kele was a teenager that had discovered a set of rather odd plugins on FL studio and scattered them like pineapple on a Hawaiian pizza. These odd sounds appear sporadically throughout the album and in my opinion don’t work once. I thought that they enlisted a Theremin player, however Kele said in a Radio 6 interview that the album was produced with a guitar a la Muse ‘The 2nd Law’.

The album is not wholly bad – it just doesn’t sound like a Bloc Party album, lacking their previously intrinsic passion, energy, drive and vigour (not to say those three qualities are needed to make an album good). When I first listened to the album I was overwhelmingly disappointed because it wasn’t the album I was expecting, nor was it a pleasant surprise. I was truly impressed with ‘The Nextwave Sessions’ EP’s ‘Montreal’ – it is a great song and it’s most definitely not your archetypal song. I therefore listened to the album hopefully, but initially I wasn’t repaid for my faith.

’Only He Can Heal Me’ isn’t great but managed to resonate in my head later that evening. The track that follows sounds like it was written by Bloc party but almost as if another band has covered their track, with it’s formula mirroring that of songs on A Weekend In The City; I can hear Lissack’s soaring riff on his Telecaster and Tong’s energetic grooves – however this version only exists in my head. ‘The Good News’ can only be described as disappointing – I just don’t understand, nor do I comprehend why Kele would allow a track of that calibre on a Bloc Party album.

It is arguably the best track on the album, Kele is at his best, as his melancholy lyrics hover over ethereal synths. It’s not retro Bloc party but it’s certainly them at their best. This vibe continues in good stead with ‘Different Drugs’, including the very effective addition of Louise’s heavily syncopated staccato polyrhythms, as well as soaring atmospheric synths. Kele masterfully whines over shimmering sub-bass intonations altogether prompting hyper-salivation. One could argue that Hymn’s flaws are atoned by the 5th and 6th tracks but that would suggest that the remaining songs are average when in truth some of them are abysmal.

The album Hymns is fairly “samey” or repetitive for want of a better word, and the band admit to this through calling the album Hymns. I haven’t listened to an album released in the last 5 years that has stuck so true to its concept or theme; it works as a body of art but not as an album, as it’s essentially an instalment. I sincerely hope that the next album gives us the drive that is normally intrinsic to their works whether it’s ‘Ratchet’ or ‘Mercury’, ‘Flux’ or ‘Luno’. This album is shockingly bad in parts whilst convincingly amazing in others making it an alright album but most definitely their worst yet. The talents that Kele has at his deposition is immense and he unforgivably neglects them, despite gifting us with a gem like ‘Fortress’. It’s worth a listen but listen with an open mind.