An Interview With Cocos Lovers 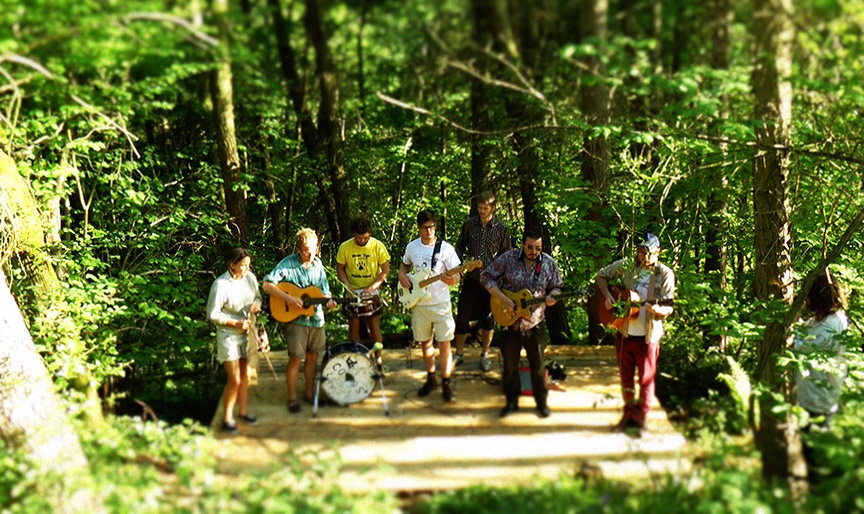 With five singers and a broad range of instruments, it’s no surprise that Cocos Lovers manage to deliver a warmly harmonic, powerfully vocal yet wholly original sound. Mid-way through their current UK tour, the close-knit band managed to find the time to answer some questions for The Bubble.

Your debut album was written after you quit your jobs and went touring around Europe. Before you embarked on your odyssey, what were you expecting from your journey? How sure were you that this was the right decision? What were the main things that you learned about making music along the way?

WILL: We went with no money, no gigs and just let the whole thing unravel. There was literally no expectation, we booked in a few communes to visit just to have a solid start; somewhere we could work and get fed. The first one was a spiritual commune where you sat in a circle holding hands talking about how you felt about your day! We didn’t last long and fled for Amsterdam where we went busking and then met a great band called The Bucketboyz who let us stay in the squatted harbour where they live, a bit like a mad max film. It all unraveled from there.

Were we making the right decision? You almost couldn’t doubt yourself for a moment otherwise you would turn around and head back to home comforts. There was a steely determination in all of us.

I think we learnt a lot about performance, through playing music on the street, and we let the music come to us in terms of the writing. The first album became a collection of the experiences, stories and struggles. There was definitely a few people back home, family etc who thought we were pretty crazy, especially as we took the kids out of education. You can find all these references in the lyrics to our adventures on Johannes.

PHIL: We definitely began to learn how to write collectively whilst we were away. Much of our first album came to us while we were out there, around fires in Holland or on a beach in Spain. Writing collectively can be quite a painful process, full of unspoken opinions and bruised egos; getting in so much practice at it whilst the band was still forming its identity means that now it comes much more naturally to us (though it still has its moments!)

The band is comprised of family members and friends. What made you decide to start a band in the first place?

WILL: I only started playing when I met Natasha. She taught me a few chords, I found instantly that although not really able to sing or play I could write! It was a huge release for me I was a young Dad, who had just lost his Dad too. Poetry and music flowed even though had never written or sung a note until I reached my twenties! Things avalanched from there as I became obsessed with music and slowly convinced all these wonderful musicians to play with me

PHIL: David and James (Hatton – our first drummer Johannes, Elephant Lands) had been in half the bands in Kingston when they moved down to Deal so being in bands was just what they did. They joined up with Will, Tash and Poggy and began making lovely sounds. They then convinced me to quit my job and learn the banjo. Billy and Nicola joined because we needed younger, more attractive members to make any real waves in the British music industry.

Your music is a joyful blend of harmonic folk with frequent African influences. How did you arrive at this sound? Who would you say were your main influences in writing your latest album, Gold or Dust?

WILL: Because the album was written so collectively it’s very hard to pin-point exact influences. We have an awareness of things we sound like but usually the music comes first, then we realise (or get told) what it sounds like. ‘Folk’ music and culture in its broadest sense is becoming increasingly global – I can experience Appalachian mountain songs or Indian ragas on YouTube, learn them, jam along with them, ‘share’ them, so often I find myself doing just that, normally at a stupid hour of the morning. Being in this band has definitely developed a passion in some of us for exploring these things but also when it comes down to it it’s very important for us to sound like Cocos Lovers from Deal in Kent.

Your lyrics cover a wide range of subjects, from the bittersweet concept of loss and remembrance in Emily to the sense of destiny and inevitability woven into Roots of the Willow. Could you take us through your typical song-writing process as a band?

PHIL: The new album was written completely collectively – much more so than the first two. We disappeared for a week last summer to the woods behind a friend’s house near Deal. We camped out and played music everyday working in smaller groups at times then all coming together to work as a full band. Everybody put ideas forward musically and even some of the lyrics were written in groups (Will, Billy and Nicola all have a great way with words).

Each song on the album probably emerged in a slightly different way. Roots of the Willow began as a few basic ideas Will had melodically and lyrically and we just kept jamming it. We took quite a bit of time working separately on the vocals, especially the end section. I decided to attempt some dodgy clawhammer banjo which went down much better than I thought it would and everything started falling into place arrangement-wise. Emily was actually based on a traditional African song tune that our old drummer Hans knew. He taught us the tune and we went from there, writing extra melodies etc. Other songs will be based on a guitar riff from David or a song from Billy or some mandolin noodling from myself. We have no hard and fast rules, we just hopefully tend to agree on what sounds good and what doesn’t.

If you could sum up the main message of all your music in one sentence, what would it be?

WILL: Don’t take life too seriously, enjoy and embrace all of its ups and all downs, and have fun.