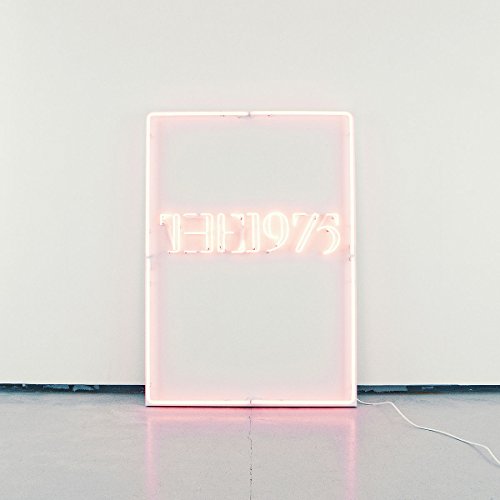 The black and white has been replaced with neon pink on the new album cover.

It’s been over two years since The 1975’s debut album, and now they’re back with something even better. The Manchester four-piece, consisting of Matt Healy, Ross MacDonald, Adam Hann, and George Daniel, have become a prominent name in alternative rock, and their self-title debut reached a much-deserved place at No. 1 on the UK Albums Chart. Their heavily anticipated second album I Like It When You Sleep, For You Are So Beautiful But So Unaware Of It was released a week ago, and immediately gathered critical acclaim. The album is romantic, cinematic and narcissistic, and there’s a distinct 80’s feel running throughout. The 1975 draw from a number of genres, creating a stunning album that is quite simply a piece of art.

Following the same form of their debut, the album opens with the ‘The 1975.’ It’s a short but beautiful choir introduction which sets a vivid tone to the album. ‘Love Me’ is next, which was released as the band’s comeback single last year. With a Bowie-esque feel to the track (think ‘Fame’), this one is all about confidence, catchy beats, and egotistic pop. This song is about the vanity and shallowness in selfie culture and celebrity friendships (“You look famous let’s be friends, and portray we possess something important”) and the music video depicts Healy dancing around cardboard cut-outs of celebrities, including Rowan Atkinson and Harry Styles. In an interview with Billboard, Healy talked about the “weird social hierarchy” of famous friendships, and ‘Love Me’ is essentially mocking the need of celebrities to be photographed with high-profile people.

‘UGH’ was the second single released from the album. The upbeat, synth-driven track is bubbling with energy, which is a brazen statement on Healy’s part as the song is about his past drug addiction (“And you’re the only thing that’s going on in my mind, taking over my life a second time”). Things slow down with the smooth, murmuring ballad that is ‘A Change of Heart.’ It adds a refreshing break between the lively guitar-pop tracks, though ‘She’s American’ returns the enthusiasm with fun lyrics and a drumming beat.

‘She’s American’ is superseded by six honestly beautiful minutes. ‘If I Believe You’ is, at the same time, gentle and graceful, intense and determined. This song is about Healy as an atheist, looking towards religion to help his pain (“And if I believe you, would that make it stop?”). It’s heartbreakingly truthful, revealing something raw and personal in the sincerity of the line “If I’m lost then how can I find myself?” which is repeated over and over at the end of the song. ‘The Ballad of Me and My Brain’ is almost as tragic, this time on the subject of mental health. This track carries more power, with stronger vocals and a driving guitar presence, but the subject matter is evocative and impacting.

‘Somebody Else’ was released just before the album, and it is without a doubt the highlight of the album. It’s effortless and eloquent, with echoing vocals and a captivating and heartfelt chorus line about moving on from an ex (“I don’t want your body, but I hate to think about you with somebody else”). The song is an ambient blend of indie and electronica, and it’s the kind of song you can have on repeat all day without getting bored.

‘The Sound’ is that song currently being played everywhere you go. The funky synth-pop single is insanely catchy and after just one listen, you’ll have the line “well I know when you’re around cause I know the sound, I know the sound of your heart” in your head for days. The 1975 have succeeded in creating the most memorable song of the year so far. The brilliantly ironic music video for ‘The Sound’ was released last week, in which the four are presented in a great glass box, lit up in pink as they perform for a number of onlookers. The video displays the hilarious criticisms of the onlookers; “unconvincing emo lyrics” “punch-your-TV obnoxious” “vapid derivative pop” and “pretentious” to mention a few. It’s become almost ‘cool’ to hate The 1975, and this video is more than a bold statement that they don’t give a f**k. They’ve taken hate and made an ingeniously ironic visual out of it.

‘Nana’ is a beautiful stripped back effort that stands out from the rest of the album. Slow songs are important, because they aren’t just there to be enjoyed; they communicate something, and they make you feel. About the death of Healy’s grandmother, this song communicates the struggle of loss. Healy’s vocals are graceful, and sit comfortably with the acoustic nature of the song. The album closes with another acoustic number, ‘She Lays Down.’ With only Healy’s murmuring vocals and a guitar, this is a song you can imagine Ed Sheeran singing. Although it may seem at odds with the synth-pop tracks, ending on a calm note just seems fitting.

This is set to be one of the best albums of the year, and undeniably it will be; I Like It When You Sleep is no less than perfect.